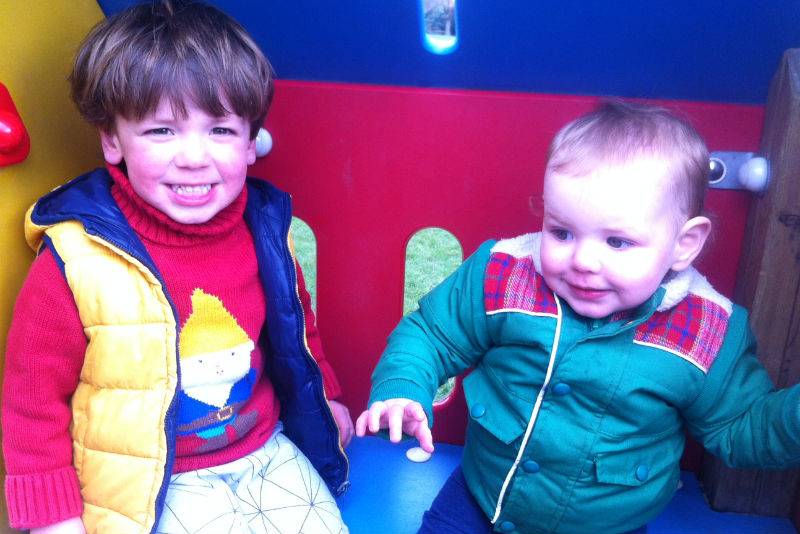 When my son was two, I asked him if he knew what the difference was between boys and girls. He told me that boys have willies and girls have pink jumpers. This could be interesting…

If I’m totally honest, I hadn’t really given much thought to being a feminist mother when I first became a mum. My first-born was a boy and by that very simple biological fact, was far less likely to struggle in the world, to find himself marginalised, down-trodden, overlooked, infantilised (okay, he was an infant, so that would have been fine), objectified, being a victim of domestic violence; all crap things which are more likely to happen to women.

I had much stronger feelings about being the mother of a girl so I just brushed all that stuff aside.  I had a new baby and I was totally paranoid about keeping him alive. So I bought all the pale blue newborn clothing and the robot toy and we painted the nursery blue, as you do.

I was pretty open-minded about toys, going with the flow and responding to my son’s lead. So when he was about one and developed a fascination with me drying my hair, I got him his own little hairdryer. It happened to be pink. His penis did not fall off as a result of playing with it.

This was looking promising; maybe toys WERE just toys after all. He was also fascinated by the microwave, so we got him a toy one and some wooden food to cook in it. He had pink and blue cups and pink and blue toothbrushes too, because I don’t know whether you need reminding of your gender every time you have a drink or brush your teeth, but I don’t.

When our son was nearly two we found out that our second baby was going to be a girl – ‘a pink one!’ people declared. That was the point at which I really started to think about how equality was going to play out in our family.

I was so excited by the prospect of having a daughter, but a little nervous as well; I really felt the weight of responsibility of bringing up a girl, who I needed to not just keep alive and love, but equip with all the tools she would need to thrive in a world that is still very much tilted in her brother’s favour. I decided that I would just declare equality for both of them, and play it by ear from there. Tractors and glittery kittens for all.

It started sooner than I had anticipated. While I was pregnant, my lovely mum bought my unborn daughter a gorgeous wooden dolls house, something I would have LOVED as a little girl. However, my little girl was still in her amniotic sac so it was clearly going to be some time before she would be tucking up the dollies in their little bunk beds and rocking the wooden baby in its little cradle. But wouldn’t my son love it too?

So we got it out and sure enough, boys like dolls houses too. And pink plastic picnic baskets. And dolls (we named our son’s doll ‘Baby Kevin’, but he has always referred to him as ‘Baby Heaven’: THAT was unnerving) And guess what? His penis still didn’t drop off.

I also started to look at the clothes my son wore and I realised that while they were all excellent for running and jumping and climbing trees (and playing with dolls houses), a lot of his clothes were rather dark and boring. There is a lot of navy out there for small boys. And clothes with dinosaurs and rockets and buses and tractors.

So I tried to make sure his wardrobe had more colour and fun in it, and that some of it could be handed down to his sister. Thrifty eh? The peachy pink sweatshirt with a panda on it and the red sandals raised a few eyebrows but he bloody loves them.

And Girls’ Clothes Are Impractical

‘The pink one’ arrived, and most people got the memo about not actually buying pink stuff for her. Because weirdly I had more of an issue about giving my daughter pink toys and clothes than I did my son. It seemed more loaded, like it would turn her into an imbecile. Which of course it wouldn’t because pink is just a colour, a colour for anyone to like and wear and enjoy. But I still couldn’t bring myself to dress her in pink very often. It seemed beneath her dignity, and she was a very dignified baby.

Even the baby of a feminist wears dresses sometimes, but not very often. They are rather annoying and impractical. You only have to lift a baby up in a dress and it lifts up as well, bunching up under the arms, ditto putting the baby in a sling (which my daughter lived in for about six months) or a bouncer or jumperoo.

Then comes the crawling, and the standing and walking, and trousers are just so much more practical. And as boring as that sounds, practicality is important; I wanted both of my children to be able to use their bodies freely, to be able to move around unhindered, to run and jump and wrestle and get muddy and muck about as much as I did when I was a kid.

I remember my khaki dungarees that I had when I was about 7 and I don’t think I have ever felt so free as I did when I was wearing them, they gave me the power to play outdoors and climb trees and ride my bike really fast. To be a kid.

My son is now three and my daughter is one and after close observation of their play preferences I can confirm that toys are indeed just toys, whether they have wheels or faces, whether they are pink, blue or all the colours of the rainbow.

We all play with the tiara which Father Christmas brought for our son and my daughter got her very own car to play with, because she likes wheeling them about. And they both like playing with (okay, trashing) the beautiful dolls house.

I realise that at the moment, the extent of my feminist mothering is pretty much what they wear and what they play with, and the example that my husband and I set for them when we go to work and share the chores (although he is very much in charge of DIY and I have just had a year at home on maternity leave.)

I know that their peers and what they see online and on TV will have more and more influence on them, that someone will tell my son he is wearing a girls’ jumper or that my daughter will decide for herself that she really, really loves Disney fucking princesses. And that one day they will begin to face the real challenges that gender stereotypes bring for both of them.

Because that has been the realisation for me, that I have to worry about both of them, and how they treat themselves and others. I hope that the path that we have set off on, with its small gestures to equality, will continue and one day stand them in good stead.