Heels or a Baby? 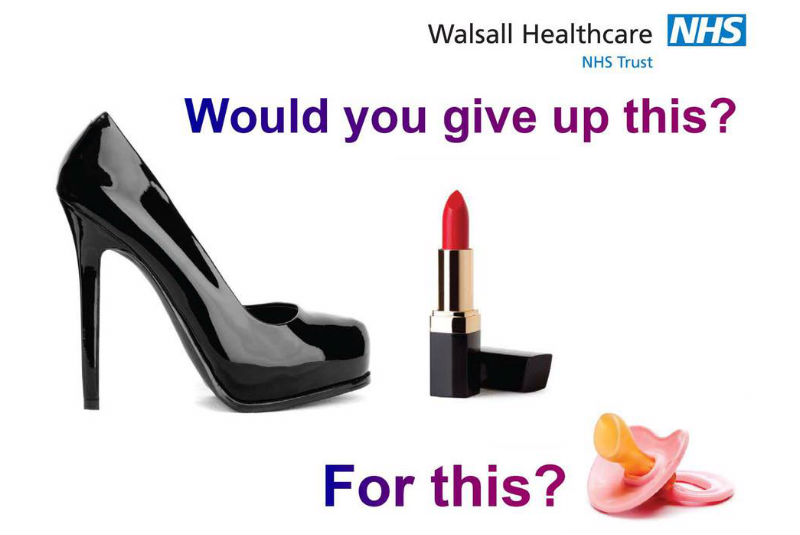 I want to get one thing straight. I like a good heel. I really like a good heel and I was smitten when I saw the black pair featured in Walsall Healthcare NHS Trust’s contraceptive campaign poster. They’re patent and well stacked and the lipstick accompanying them is siren red, and I don’t mind telling you that I’m partial to a red lipstick, too. One with blueish tones.

As adverts go it’s pretty straight forward. Pair of heels and a lipstick. Then that question: ‘Would you give up this?’ A pink dummy: ‘For this?’  Details of how to obtain emergency contraception are given and in another advert of the same ilk, a games controller is featured instead of heels with the cautionary advice: ‘Bware da baby trap – use a condom.’

What I don’t like about this NHS advert designed to reduce rates of teenage pregnancy is how reductive it is. I don’t like that the interests of complex individuals are diminished to sexist eighties stereotypes or that adolescent freedom is equated to girls tottering around on heels who fulfil feminine aesthetics for lusty teenage boys (who are in turn obsessed with marathon gaming sessions.) I don’t like the use of slang that implies adolescents are so inarticulate that they need less letters to their words. Starkly interesting, for me, is that the girl’s sacrifice in this campaign is to give up her self-image, and a socially perpetuated feminine ideal one at that, whilst the boys only sacrifice their hobby. Because girls don’t have meaningful hobbies or personal interests, do they? Girls just like shoes. Girls are blank canvases to be smeared with lipstick and horned in to dominatrix style shoes on nights out, aren’t they?

What does this advert say about mums?

Implicit in the advert’s signifiers is the suggestion that mothering is a sacrifice of identity and freedom. Well, it is a little. I can’t abide unbalanced arguments so I’m going to unstrap my heels and climb down ever so carefully from my feminist podium (which I’ve been twerking hard on) and admit there are aspects of motherhood that high heels really don’t suit. That in pregnancy, for instance, heels are a plain old bad choice. That in the early weeks with a newborn you wouldn’t know a lipstick unless it wrote BUY MORE LANSINOH on your face in Chanel: Red Allure.

Naturally, there’s been a backlash on social media for the advert’s suggestion that women must choose between their well-heeled nights out or a crying baby. Like they can’t have both. The premise here is that motherhood is the young woman’s ruin. A trap, the Trust reckons. The End.

Now, I’m not suggesting motherhood isn’t incredibly hard work and I didn’t come to it early, but I know of so many young mothers who are magnificent at mothering and this advert does a decent job of discrediting them all. Mothers building humans with love. Mothers who may or may not go out to the pub in high heels wearing lipstick but who learnt a lot earlier than their peers about priorities and time management and selflessness. Mothers who know their children to be positive social investments.

Society must tackle rising rates of teenage pregnancies and safe sex should be top of the agenda but there’s ways of tackling it and this heavy-handed, sexist reductionism ain’t it. Adolescence is complex and healthcare, of all the sectors, should really be handling campaigns of this nature with more grace and sensitivity.

Nicola Wenlock, Director of sexual health for Walsall Healthcare Trust has issued this: “We apologise if this advertisement has raised a concern, the intent was to raise awareness of emergency contraception and advice available for those in this age group who wish to avoid unwanted pregnancies.’

As a former social worker with young people, I’ve delivered sexual health training and done intensive therapeutic work around pregnancy, STDs and healthy relationships. I know how crucial it is to reduce teenage pregnancies. I’ve also worked specifically with single young mothers and know them to be some of the most resilient people I’ve ever met.

For the record I wear heels. Very high ones. I’ve also got two children. See, I dared to choose both and my heels: well, I run exceptionally fast in them.