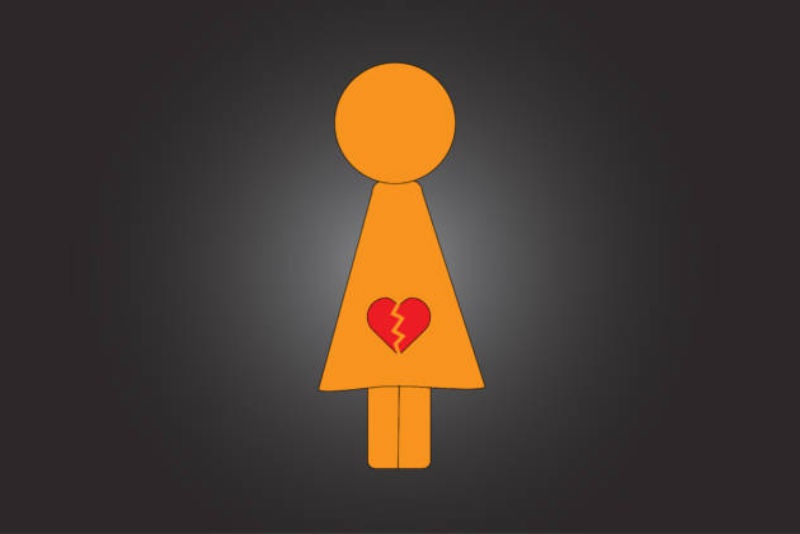 Ectopic pregnancies are rare, only 1% of pregnancies, definitely not worth worrying about.

I was so lucky with my first pregnancy, we got pregnant on our first try and had a straightforward pregnancy and birth. I knew I was lucky but I don’t think I really understood until we started trying for our second.

My story takes a short, albeit painful, detour into Postnatal Depression, which floored me for the first eight weeks of my son’s life and made me terrified to try again until I’d had a fair amount of therapy to deal with all the many issues it brought up.  I finally felt ready to expand our family a couple of months after my son turned three and I was excited. Scared, but excited.

In the first month of trying I was convinced I was pregnant but the test a day before my period was due was negative. I felt confused and questioned my sanity – had I just made up all those feelings, symptoms and crazy hormones?!

The day my period was due, I was at hospital for a routine breast exam and I suddenly felt unbelievably dizzy. I was partly excited because I thought it must mean I was pregnant and the test had been wrong. Staff were worried enough to take me to A&E and they ran all sorts of tests while I kept telling them I thought I was pregnant.

They did a urine test and it was negative. I called my husband and told him I didn’t understand what was going on and maybe it was an ectopic because this just didn’t make sense. But I didn’t really think it was and assumed doctors would know if it was.

I asked if they’d do a blood test to double check for me and they told me there was no need. They thought it’d been a small ovarian cyst that burst as they couldn’t see anything else wrong with me.

The doctor was kind and said he’d send a letter to my GP to book an internal exam (how we love those…) for the next week or so to check everything was okay in there. And that was that. I went home, cried a lot and my period started the next day.

Two weeks later the letter still hadn’t arrived at the GP’s and I was off on holiday to Italy with my family. So I said I’d check when I got back and off we flew.

I was six weeks pregnant.

Three days into our holiday I started to bleed. Just a bit and I thought maybe it was the cyst thing…whatever that meant. Then it got heavier and my stomach was really uncomfortable. On the third day I Googled some stuff and was suitably freaked out enough to go to A&E. They ran tests and took bloods to check I wasn’t having an ectopic and I told them authoritatively that it wasn’t possible as I’d done tests and they were negative.

They wanted me to stay over just in case but I said I just wanted to go home and promised them I’d come back first thing in the morning.

The next morning we sat down in the doctor’s office and, in a mix of Italian and English, she told me I was pregnant, which for just a moment made me so happy, until I realised it couldn’t be good news. The internal scan showed a tiny sac stuck in my right tube. A tiny sac of possibilities. My April baby.

The rest was a steep learning curve about everything ectopic, and a lot of Google translate-aided conversations with doctors about my options.

We waited – ‘expectant management’. We cancelled return flights, extended car park stays and asked the incompetent car rental people to pick up the car from the hospital.

Two days later the tiny sac wasn’t giving up and so we decided that an operation was my best option. I’d not get back home in less than three weeks with the injection and I just wanted to be home and recovering.

Operations are never fun. And, as all parents realise, once upon a time your partner would be with you every step of the way but, when you have a child, you’ve got to do things alone because no three year old is sitting still in a hospital all day.

When it was over we booked our flights and flew home to recover and try to make sense of everything.

The physical recovery took a few weeks. The mental recovery is ongoing.

It’s been a year since that day and it still makes me cry to think of my lost baby.

I’d not just lost a potential child, which is hard enough and so common in the early weeks, but also part of my body, my reproductive possibilities. For me, there was a sudden distrust of this body that could so suddenly turn on me and create a potentially fatal internal bomb out of a beautiful wish for life.

On top of this, the doctor in Italy told me she believed the other tube was blocked and gave me a 1% chance of conceiving naturally. Suddenly the 1% was flipped. I’d gone from one extreme to the other and it felt unfair. It’s childish but it’s really the only thing I kept thinking throughout this process. Like my son when he doesn’t win, I wanted to scream and tantrum IT’S NOT FAIR!

Our story isn’t done yet. We discovered 3 months after starting the IVF discussion and as part of the tests and checks they make you do, that my left tube is, in fact, open for business – cue a LOT more tears, happy this time  – and so we’re trying to conceive the old fashioned way. But with a depleted transport system and a traumatised sense of reality.

Every month I worry that the negative test means it’s ectopic. And every month I do a test half way through the month just to double check it’s not. I’ve taken myself to the Early Pregnancy Unit twice completely convinced I was having an ectopic pregnancy and those amazing women have been so kind in taking my bloods, scanning and reassuring a very anxious woman. I’m back talking to a therapist to help me navigate this minefield of emotional trauma and I’m obsessively trying not to obsess about every little twinge in my body.

Often I’m just dreaming about what could’ve been.

I know how lucky I am that it didn’t rupture mid-flight or when we were in a remote Italian hilltop village. I know I’m lucky I have a healthy, delicious child already. I know I’m lucky I have two working ovaries, one tube and a uterus. And I found that doctors, who’d obviously seen much worse than me, were quick to remind me of my luck, trying to make me feel better.

But to force yourself to ‘be grateful’ and not allow yourself to fully feel the enormous sense of loss, the traumatic helpless feelings of being cut up or near death and the fearfulness for the future is to belittle the experience. And that way mental health problems lie.

I made a conscious, if sometimes painful, effort to be very open and honest about my experience. And I’ve been met with love, understanding and, maybe unsurprisingly, a lot of people sharing their own experiences of loss.

I mourn deeply for the life that could’ve been and I mourn for what’s been lost from my body. I’m trying to trust my body again and one day I hope I’ll be lucky enough to have another child. Because it turns out it’s just random dumb luck.

If you’ve been affected by ectopic pregnancy you can get support and find more information here. You can also read MOLO Rachel Dampier’s story of survival here.

Mum of one lovely monkey, working and living in foggy London Town.