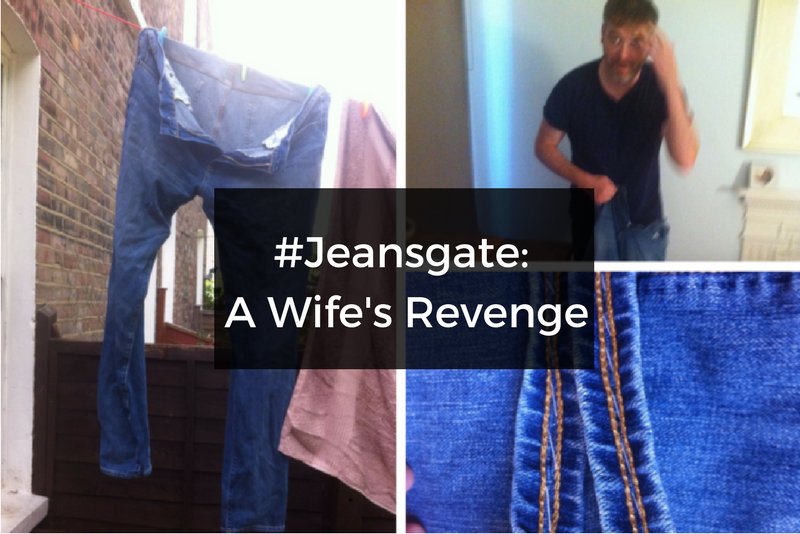 It was less the “why haven’t my jeans been washed? I put them in the machine and you took them out. I’m not happy with you” and more the ‘I’m disappointed in you, wife’ stare that made me want to get my own back. This is not – repeat not – the 1950s, and nobody tells Alison to do their washing.
So, as I went to the garden later that day to bring the washing in, I looked at his jeans pegged on the line, freshly washed and dried in the sunshine, and decided it would be a lot of fun to sew the bottoms of his trouser legs together so that the next time he tried to put them on, his feet would meet a dead end. Kinda like an apple-pie bed for the feet.
I posted in The Motherload® Facebook community to see if anyone would object, but I’ll be honest, I was so confident of a resounding yes that I started sewing pretty much straight away. 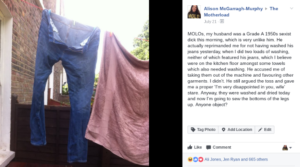 Good job the MOLOs loved the idea:
Stephanie: Genius idea. Love it. I’d have been tempted to wash them with tissues in the pockets so he had those annoying bits in them for ages.
Lauren: Can you film it so all MOLOs can see? Brilliant
Lisa: Don’t be so silly. That’s a very childish way to behave. Unpick the crotch seam instead.
Irena: You are a hero!! True inspiration!
Sarah: Did you actually do this? If so… MOLO LEGEND
Then it was a case of folding up my handiwork (sewing is a skill all good wives should have, no?) putting them beside his bed, where most of his clothes live in the floordrobe and waiting for him to put them on.
The next morning I was giddy with anticipation as I hovered in the kids room with my phone ready to film or photograph him: then he chose shorts! Dammit!
Then Sunday morning rolled around, the day was not so warm – we had a little light banter about whether his jeans were clean (mwah-ha-ha-ha) and I awaited my moment of sweet, sweet revenge.
This video shows you the moment he tried to put them on, and realised he’d been pranked.
He has a great sense of humour and took it brilliantly – one of the many reasons I love him. I will say, he is every bit the modern man and would never usually say anything like this – which is why I was so shocked I decided to seek revenge.
Hopefully, it’ll be a while before he has the cheek to chide me for laundry misdemeanours again…
Like this? Share it, and spread the MOLO love! There are loads more fantastic and funny stories from our Facebook Community and for the latest from The Motherload® head to our homepage