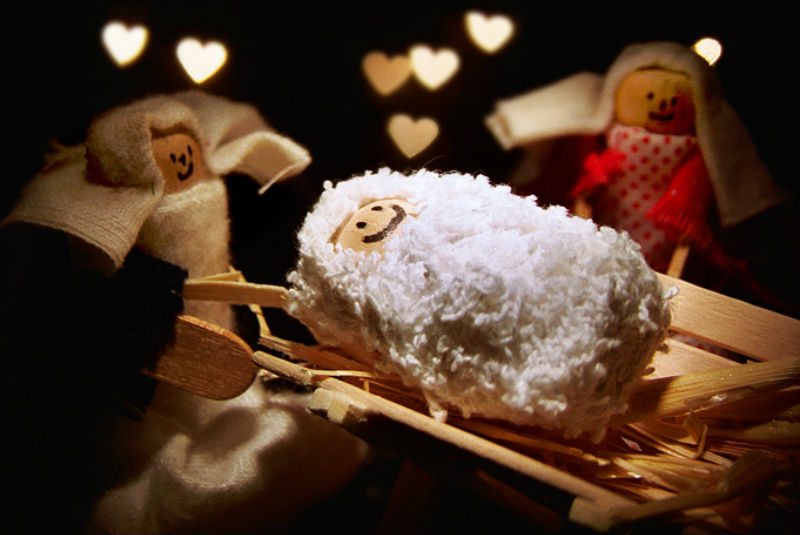 I’ve only just flicked the crustaceans off my flip-flops and the commodity perverts are already pimping a third off bumper tins of chocolate in Sainsbury’s. It can only mean one thing: Christmas when the National Curriculum turns all dramatic with The School Nativity. Every year, contemporary nativities get bigger and more polished. It doesn’t matter if you’re a seasoned pro at knocking up tinsel halos or if your child’s fresh in to their Reception year with a singing phobia, the festive capers come to us all.

Once we hit December, it’s cue kids sobbing every night about all things Christian-related. If it isn’t their lithpy pronunciation of ‘Bess-lee’s-ham’ and ‘Harolds Angle’, it’s the head-dress making them look like a wuss. Last year, my friend’s daughter threw her tuba at their HD plasma screen because her rendition of ’12 Days’ sounded like a turn-the-page-now audio story piss-take. Whilst you can’t do much to erase kid’s nerves, I’ve given up and let school take care of all the rehearsals. Miming Noddy Holder’s ‘It’s Christmas’ with a Clairol brush is also helpful prep in the event of stage-fright.

Remember that your child’s traits don’t determine the character they’re cast as. It’s a sheer fluke that the chronically shy girl always gets the role as rodent or mute villager in the same way that the little bastard who throttles kids on the playground gets crowned as King Herod for two years running. If you’re as neurotic as me, you can spend ages dissecting if your son’s sensitivity influences his effeminate parts such as panto dame and snowflake, but at least he’s never been a mule.

Fancy dress = high stress. Whilst adults know there are masculine angels in Scripture, issues of sexuality are not so clear-cut when you’re trying to cajole a four old boy in to woolly white tights. It took three bags of chocolate buttons for my son to quit whingeing about his role as Gabriel then he fell asleep in his baked bean juice with the wings all skew-whiff at the back. If your child refuses to wear the ridiculous festive ensemble like mine, make a fun pact to dress up too on opening night and go as Jesus’ toe-post.

In past times, my mother said that she supped 20% proof sherry in the school hall whilst watching my sister and I act out the Immaculate Conception. And nobody dreamt of whispering paedo when she set up her tripod to take sepia portraits of the wise men. #makingmemories #Jesusrocks
Although data protection requires parents to sign a photo disclaimer now, you can still take all your family snaps – you just can’t post shots of other people’s kids via social networking. There’s always one though, isn’t there? The mother who can’t restrain herself from posting photos to Facebook of her mini Wise Man with another mum’s Mary picking her nose directly behind him. It’s a no brainer, a matter of mutual motherly respect. Keep the animals’ offline. Lock the stable.

Opening night’s no time to arrive early with a hysterically excited child. Always over keen, I arrived in the school foyer to find it gridlocked with parents and kids in hefty outdoor coats waiting to be admitted for their costumes. First, my son crawled commando-style amongst fifty odd ankles for fun and pretended to be dead underneath a chair. Secondly, he announced loudly that his mummy bleeds from her front-bum but it doesn’t mean she’s dying. I pretended he wasn’t my child. Perhaps it was an Act of God that people were in my way, that I couldn’t actually reach him. If they say arrive at ten to, make it nine to.

Tissues. Take some for snot and removing dried chewing gum off the baby bear chairs. Also for mopping up mascara. Stuff how hard you are, my roller ball lashes smudged unexpectedly when my son got his one speaking line: ‘Hark, a star’ absolutely knob on.

Despite the slog, any parent au fait with end of term productions knows that there’s nothing as moving as seeing your sprog under the spotlight. Last year, I was speechless when I saw my son knee-deep in straw with a tea towel safety-pinned to his little head, urging his classmate to ‘push, Mary, push.’
It must be a profoundly satisfying end of year finale for the staff, too, after 12 months of hard graft. I found something inexplicably moving about watching my child’s teacher conduct 32 barnyard animals to bray ‘Silent Night’ without resorting to slugging Prosecco from the bottle during the second round yon virgin.

Rachael Smart is a writer. She wings it as a mother of two gorgeous boys and often writes in vehement disbelief about the mystical world of child-rearing (where grown-ups frequently lose their shit but manage to hide the brown stains remarkably well.)