I bloody love snow. It’s felt so fresh and properly cold this week that I could almost convince myself I was in the Alps. Where of course, I haven’t been since having children. All week I’ve been wishing and hoping for a snow day – no work, no school, no nursery – just me and the kids playing in the snow having a rare old time. Well today, my wish came true. Sort of…

We wake up early, all bright-eyed and cheerful, enjoying breakfast together – possibly porridge or pancakes – before wrapping up warm and heading outdoors. The children excitedly pull on their snowsuits, bobble hats and welly boots (belly-button boots if you’re my three year old daughter) at the first time of asking because they are SO happy to be going out to play in the snow. I carry the sledge down the street, the children skipping along together, pausing to throw the odd snowball. 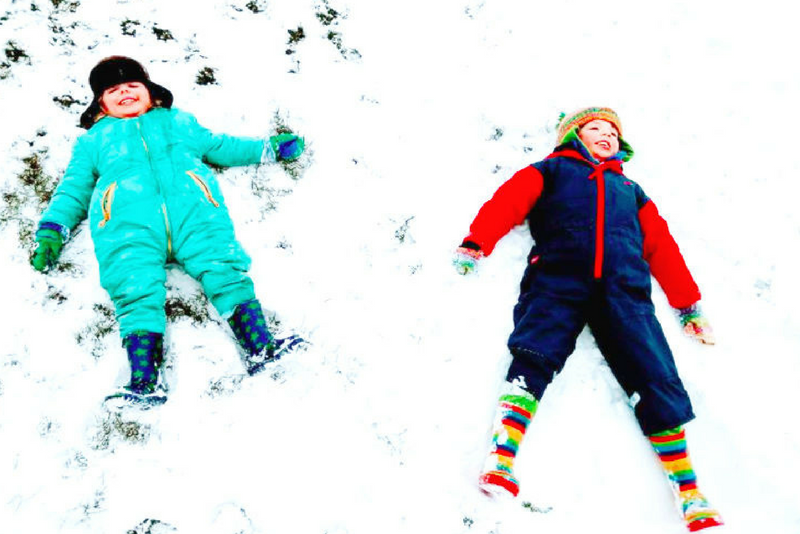 We spend a merry hour taking turns sledging down the hill before everyone agrees that it’s time to go home and warm up. As we get home, everyone undresses nicely and snuggles beneath a blanket while I whip up hot chocolate with marshmallows to warm our hands.

After lunch, we head into the garden and everyone has a wonderful time building a snowman. The children are so tired after their day of snow play that they go to bed without even being asked and fall asleep straight away. The end.

The eldest wakes up at 0545. Rather than headbutt the wall whilst wailing “why me?” I put on the TV and make the kids promise to be quiet until 0730 so mummy can sleep a bit longer. 0600 the disputes begin. Mummy’s extra sleep is broken into groggy three minute chunks which make me marginally less patient than usual. Still – there’s snow outside and we are going to have F.U.N.

After breakfast (crumpets – pretty close to the fantasy), I decide it will be a good idea to make a list – an action plan if you will, to help me cope with Snow Day. This will add structure to the day and minimise tantrums. I draw up a list of hearty, outdoor activities, and stimulating indoor activities.

You can read my Snow Day Action Plan here

First activity: sledging. It takes a good hour to persuade everyone to get dressed. Then another hour to actually get dressed and then get dressed again on top of that with the many, myriad layers of outerwear needed for snow-fun in Storm Emma/The Beast From The East/Snowmageddon. Eventually, the snow-day crew steps outside, ready for fun. It really is totally fucking freezing. They weren’t kidding on the news. Good job I’m wearing my jeans because they will be great at keeping the cold out. I carry the sledge as we head up the road to the park, the children pause occasionally to lick a snowy wall, or pull petrol-infused icicles from beneath a car to suck on.

We spend a distinctly mirthless half-hour taking turns sledging down the brown ice on the hill. And taking turns to have tantrums because “I want to sit at the front” “NO! I want to sit at the front” “There’s snow on my gloves” “NO! There’s snow on my gloves!” “I’m COLD mummy!”. Snow angels were a success, as was the thermos of hot chocolate. If anyone whines, I just shove raisins in to block the sound. Eventually we give up and head home to warm up. It takes another hour to get everyone undressed and into dry, warm clothes, the requests for something warm to drink ringing in my ears as I kneel in snow-puddles in the hall, wrestling wellies off limp legs. Our friends arrive and eventually, my angels sit grasping their hot chocolates, red cheeks aglow, snot coursing down their upper lips. My legs are cold and I still have no feeling in my buttocks after lunch when it’s time to head out into the garden and build our snowman.

Only, it’s the wrong kind of snow.

The Beast from the East brought powdery, crumbly, dry snow which you can toss in the air to make it re-snow. But you cannot build a snowman with this stuff. The children soldier on, creating a small heap which they are imagining will soon resemble Olaf. Only it doesn’t. It resembles a small heap of snow. I join in for a few minutes helping shape it into a smooth hump, simultaneously mourning the ruin of my beautiful Ted Baker leather gloves as I try to make enough snow stick together to create a head. It falls apart multiple times and it’s all too much for the kids. Youngest goes indoors, eldest perseveres but is emotionally destroyed by his inability to make the carrot nose stick in without his snowman’s head exploding. Ditto the raisin buttons. It’s tragic. And he sobs. As I take the photo of him with his snowman, he screams:

“I hate the snow, I never want snow again”.

We come inside to recover, bake a cake and build a blanket fort. Which becomes more like a military fort, the first spat and full collapse occurring within 30 seconds. Six collapses later, the knackered clothes airer is shoved back in the cupboard.

We’ve made it to dinner time. I can DO this. I lay on a slummy mummy dinner (come on, I’ve baked a bloody cake) and the good humour – also known as silence – is restored.

We have our customary Friday night disco, which quickly descends into anarchy, stick Frozen on (only the fourth time this week!) and get out a couple of snowy stories.

As we wind down for the night, we reflect on a day of sledging, hot chocolate, snow angels, snowmen, baking, blanket forts, friends and delicious cake. A day of memories made and banked, with all the rough edges and bad moods smoothed out and forgotten.

I watch the snow falling outside, and get ready to do it all over again tomorrow….