Swimming with Kids: Hellish or Heavenly? 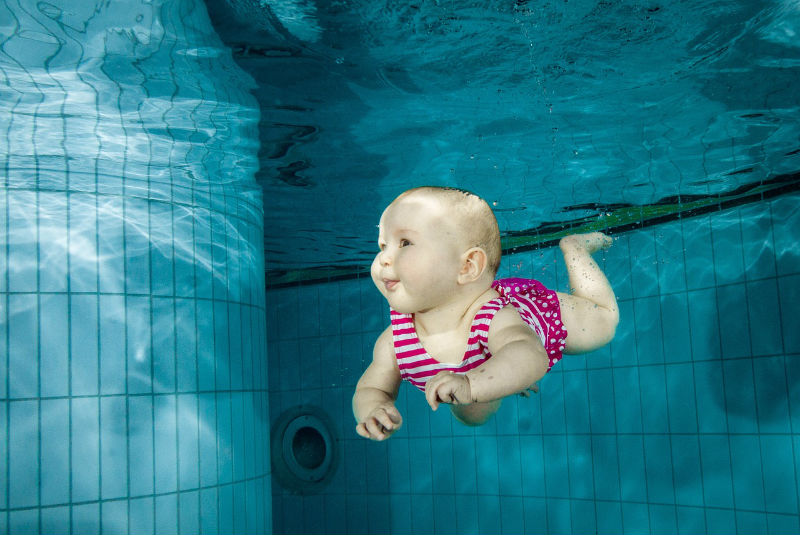 The first time we took my son swimming, he was about nine months old. My husband and I wrestled him into a swim nappy and one of those all-in-one Lycra suits, blissfully unaware of how easy we had it with our two-adults-to-one-child ratio. ‘Aren’t you just supposed to dunk them?’ my husband asked, once we got in the water. I didn’t know. It sounded feasible, so we tried it. It did not go well. And that was the start of his unhappy swimming career.

For months after that, my husband would take our boy swimming at the weekend whenever we didn’t have anything else on. It was the thing they did together to give me a break (so I could binge-watch Coronation Street and eat chocolate as quickly as I could get it in my mouth). His stance didn’t change much. There was a lot of very tight neck clinging and a lot of tears. Then we started going together, the three of us. More of the same.

And so, we went less and less. He didn’t like it and we didn’t like it, so it was hard to see the point. Other than, you know, wanting him to have this important life skill. But there was so much time, wasn’t there? He was only two.

Now, he’s three and he has a sister who’s the age he was when we first dunked him. So we decided the time had come for a family swim. As we packed the bags, I casually asked my husband whether he wanted to deal with him or her. He said he was easy, so I shoved the swim nappies and the all-in-one suit and the changing stuff in his bag before he could change his mind. Our son is relatively easy these days, lifting a leg so you can pull off a sock when you ask him to. Sometimes he even does it before you start getting cross and counting to ten.

The family swim session at our local leisure centre started at 8.30am, and we arrived at 8.40am, which I thought was pretty impressive, given that our daughter had done a poo just as we were about to leave. ‘Better now than in the pool,’ my husband said, reaching for the wipes. But those ten minutes cost us. We were told the training pool was ‘full’ and we had to put our names on a list as if we were trying to get into an exclusive restaurant instead of a pool full of piss. ‘Can we wait in the soft play?’ I asked, meaning ‘Can we get free passes for the soft play?’ It wasn’t open yet. Of course it wasn’t.

Ten minutes later, we were waved in. My husband muttered about the queuing system and the fact that the family walking in front of us had put their names on the list after us. We found the changing rooms, ascertained that the two family cubicles were in use. Of course they were. We made our way to two separate sweaty boxes and tried to change ourselves and our children without getting any clothes on the wet floor. Spoiler: impossible.

But then, just as I was accepting that swimming with children was awful and always would be, something amazing happened when we got in the pool. Our daughter, longtime lover of baths, was smiling and splashing away. And maybe it was seeing her so happy and relaxed, or maybe it was just that he’s a bit older now, but our son was happy too. He got hold of one of those noodle floats and my husband showed him how to kick his legs and he was off. ‘Don’t hold me, Mummy! I can do it myself!’ I was stunned, the memories of him clinging to my neck for dear life still vivid. We laid our daughter on her back with our hands beneath her head and she was so relaxed, she tried to have a nap. It was naptime, to be fair.

After a while, she got cold and shivery, so my husband took her out to get changed. I spent another ten minutes or so chasing our son around the pool, trying to persuade him to entertain the idea of getting out. When I’d finally got him in the changing room and we’d removed our dripping costumes, I sat him on the bench on a towel and found his clothes. ‘Thank you, Mummy,’ he said, as I passed him his pants. ‘I couldn’t do it without you.’ I smiled and gave him a wet cuddle, buoyed up by our successful swimming experience, against all the odds. We should do this every weekend, I thought. But we probably shouldn’t. I have no doubt it’ll be hell on earth next time. And there’s no way I’m taking them both on my own before they’re fully able to put their own pants on and there’s no risk of them pooing in the pool.

Like this? Why not share it and spread the MOLO love! You can read Laura’s last Motherload blog Gone Forever: When Children Ask About Death. For the very latest from our writers, visit The Motherload® homepage