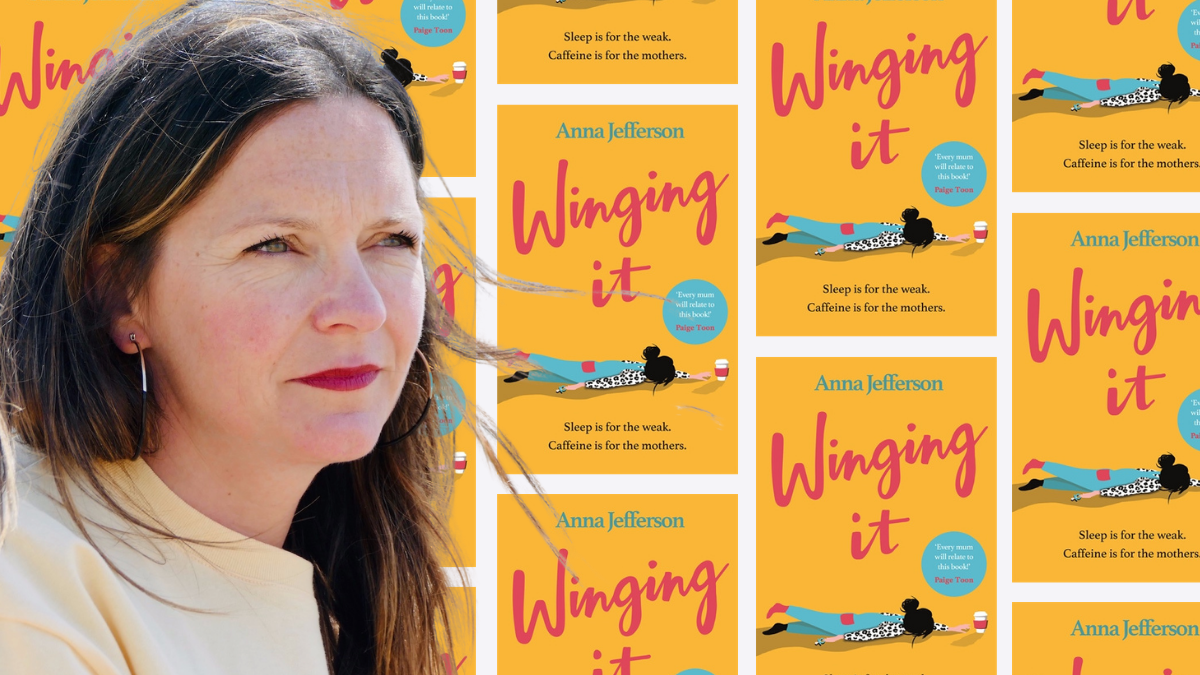 Anna Jefferson is the author of Winging It, which was released in paperback on 12 November. She took the time to answer some questions for us.

Can you tell us a bit about Winging It?

Winging It follows the story of thirty-two-year-old Emily, as she grapples with the identity crisis of new motherhood.

She is a messy, flawed, likable character. She lives with Nick, who she met while travelling in Thailand after university. Together, they adapt to bringing baby Lucy home and making room in their lives and hearts for their daughter. Emily finds friendship in Helen and Tania, both new mums and under any other circumstance, an unlikely fit. An immediate strong bond is formed, as the three women hold each other up through a series of firsts, and provide much needed support and laughter as they navigate through those lonely early days of parenting. You know when someone has seen your blister encrusted nipples and encourages you to attend the breastfeeding clinic, for example, that they’re a keeper.

The story is set against the backdrop of Emily growing up as a teenager in Lincolnshire in the 90’s, watching the Prodigy at Glastonbury in ’96, losing her virginity and how she lost contact with her best childhood friend.

If Emily is honest with herself, she loves her daughter with an intensity she has never known, but is struggling with new motherhood. She feels overwhelmed and lost, and knows the only way she is going to really get through it is to confront her past and get in touch with her oldest friend, who she hasn’t spoken with for fifteen years.

How did you adapt to the early days of motherhood?

It initially felt like being hit round the head with a large metal object. I had preconceived ideas of the kind of mother I was going to be. How a baby would just slot into my life, how being a parent wouldn’t change me. I’d just strap it to me and go to concerts or festivals, I was going to be a cool laid-back mum.

Twenty-four hours in labour, a forceps birth and an episiotomy later and I thought I’m never going to be able to sit down again, let alone go out. I, like lots of people, moved away from home for university so, although I have a supportive family, they lived miles away from me. So, it was the brilliant women around me who provided that lifeline in the early days. And not just the old friends who’d been in my life for many years, but the other new mums I met, as there was an immediate shorthand to the way you connected. There was no room for small talk at 3am when you were WhatsApping the new mum’s group to see who was awake and if they knew what mastitis felt like.

I quickly had to readjust my expectations, and realise that if I did one thing in a day, it was a success. If I made it to the shop around the corner, or put a wash on, I was winning. But also, to slow down and enjoy those moments with my daughter when she was asleep on my chest, all floppy and warm with tiny legs curled under like a frog. I miss those days, the sheer joy of just sniffing her head!

Did you always intend to write a funny book?

I think we have to have a sense of humour in the way we approach the world, or we’d lose our minds, especially at the moment. The early years of parenting are one massive pendulum of laughing then suddenly realising you’d burst into tears, how you’re constantly living on the edge of your emotions. I wanted that to come through in the book.

How an advert for McCain’s oven chips could have you sobbing into your cuppa for no apparent reason. But also, how the fug of early motherhood could present some of the most hilarious, sleep deprived moments.

I remember when my daughter was about three months old. I had put the twentieth load of washing that day on the clothes horse in the garden of our ground floor flat, and when I went out later that day to bring it in, half of my underwear was strewn on the grass. Thinking nothing of it, I gathered it up in my knackered haze and brought it all in. It was only the following day, when my neighbour upstairs popped her head over her balcony to ask if anything had dropped down, I realised they were indeed her pants that must have blown over. By this point I was already wearing a pair, in my defence they were just standard black pants so easily interchangeable. I had however congratulated myself that morning when I’d put them on and they’d felt looser than normal so I’d assumed I’d shed some baby weight, not that I was wearing my neighbour’s pants. I didn’t tell her, obviously.

How long did Winging It take you to write?

The book was inspired by my blog, You Can Take Her Home Now, that I started writing soon after I had my daughter nine years ago. It was initially a way for me to get my thoughts in order, a no-holds-barred record of what it was like to bring a brand-new baby home, so I didn’t forget or sugarcoat it in the future! Other women started to read it and get in touch, some I knew, many I didn’t, and it became clear that we were all just muddling our way through it. That it doesn’t matter how well informed you think you are, nothing can prepare you for the life changing moment you bring a human being into the world.

I was keen to fictionalise these experiences, and in 2016 I met Sarah Ballard, my now agent at United, who supported me to sculpt my blog into a novel. I have written for fifteen years, mainly for stage, so the opportunity to write a novel was one I was really up for. It came with its set of challenges as well, my second child was not yet a one-year-old at the time, so it was a juggling act, one I’m sure many women can relate to, the constant feeling of plates spinning and not feeling like you’re doing anything well!

I signed a two-book deal with Orion and was fortunate enough to have a fantastic editor there, whose support and experience helped me to write the book I wanted to write – a novel that conveys the raw intensity of that adjustment to parenthood and how you start to find your way through it. It is no coincidence in my opinion that it has been fantastic women who have helped me along the way!

Winging It came out as an e-book and audio book in March 2019 and was published in paperback on 12 November 2020.

Can you tell us anything about what you’re writing next?

I have recently finished my second novel, Nailing It, also published with Orion which is out in August 2021. The novel is about the three central characters, Emily, Helen and Tania, five years on. The challenges they have to face, from failing relationships to internet dating to aging parents, and how friendship is more important than ever. The book is a sequel to Winging It but can also be read as a stand-alone novel.

I am currently writing my new book, Maz and Me, about two girls who become friends while camping with their parents at a Eurocamp in France in the 90s. It’s been a lot of fun to research, and I’m really enjoying getting stuck into developing the plot at the moment.

The day starts with coffee, followed by an hour of repeatedly asking my nine and six-year-old to get dressed/ brush teeth/ find book bags etc on repeat. I eventually get to my desk about 10am. There’s the obligatory bugger about on social media, and then I actually get down to writing at about 10.30ish. I don’t give myself a set amount of time to write, but instead, a rough word count. I try to write at least one thousand words a day. If it comes easily and I’ve finished in a couple of hours, brilliant – I can get on with something else. Other days it takes longer to get going, and I might have to have a walk around the block to get my thoughts clear.

Can you tell us some books you’ve loved this year?

I started the year reading David Nicholls’s latest novel, Sweet Sorrow, I really love his books, he absolutely nails it when it comes to the balance between humour and poignancy. Another 90s inspired novel I enjoyed was Dawn O’Porter’s debut Paper Aeroplanes, following the awkward friendship of Renne and Flo, inspired by her childhood growing up in Guernsey. I was blown away by Queenie by Candice Carty- Williams; her raw, unapologetic style is incredible. I read it in one sitting. I’m currently reading Circe by Madeline Miller. It’s spell-binding and really intoxicating to get caught up in the world of the Greek gods. I am trying not to race through it, as there’s nothing more disappointing than reaching the end of a book you’re completely loving!

Buy Winging It on Amazon here: