Mosh Pits to Sandpits; My Ever Evolving Love of Festivals 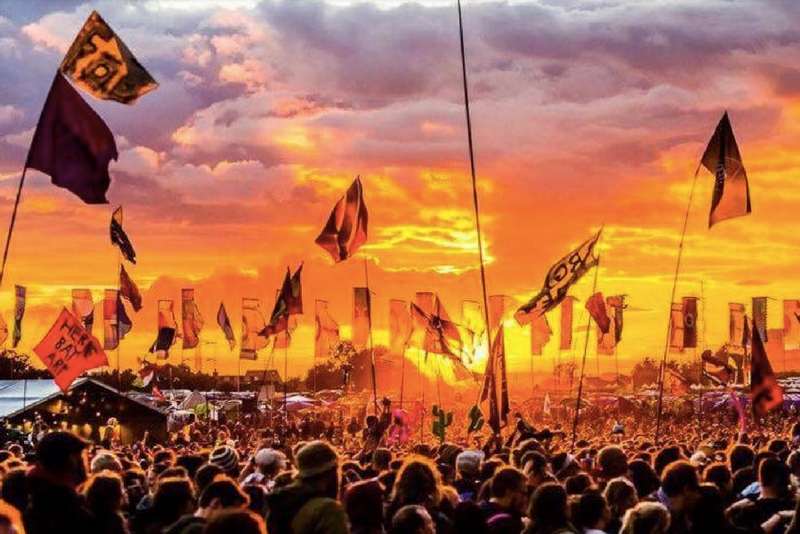 There’s a specific memory in 2011; Matt and I are standing on a small hill, overlooking the main stage, at night. The lights from the main stage hit us, and the hedonism of the weekend takes over, powerfully, as the rain falls and soaks us to the skin. As we kiss, he envelopes me tightly, The Verve pump out ‘Love is Noise’ at full pelt; Richard Ashcroft is at the top of his game, and we are on the top of the world. “I love you”, Matt whispers in my ear and love rushes through my body, rooting me to the ground in this epic moment. Without a doubt, it’s one of the most intense moments of my life. He became my husband just three years later.

Festivals have been a part of my life since I was eighteen. I remember going to Glastonbury with my boyfriend and his friends, a day too late and without a ticket. Our friend Al, had offered to drive us down but he totalled his car the day before. No worries, he said. He bought a battered, cheap VW Polo the day we left and insured it en route. We drank beer in the car in the hot sunshine, legs and arms out of the windows; completely carefree and on our way to the best festival in the world. We arrived and pitched the tents in a farmers field and once done, made our way in; in 1999 there was no photo on your ticket or even a proper gate; it was a basic turnstile and a student open to bribery. Still, you had to bide your time. There had been talk of climbing over the fence on the way down, but when we arrived we realised the organisers had cottoned on and the fences where now about 10 foot high. Three of the group paid a security guy fifty quid for wristbands and to climb under the fence in a makeshift muddy tunnel, and then they came out, and we swapped bands, one by one, heart pumping as we made it through the turnstile and wristband check, trying to look as nonchalant as possible, whilst simultaneously sweating from the en-route alcohol intake.

We made it into this sea of people, of tents, of colour and life, everywhere. People dressed up, people dressed in barely anything, and there was I, a girl from middle class Staffordshire with her eyes wide open. We pushed through crowds to the front where the bands were playing; bodies stacked like sweaty sardines, jumping together, glistening, hot in the afternoon sun. Some small band, Coldplay, were playing in the mid-afternoon, and our group didn’t rate them because we were anticipating the headliners later. The sun beat down; not the Glastonbury so often experienced but rather an arrid, dry heat the whole weekend. I remember the crowd thumping against me, jumping along with Fun Lovin’ Criminals, and then subdued as the sun started to fall slightly in the sky to ‘We Are All Very Worried About You’ and then feeling overwhelming emotion. I felt connected, weirdly, to all of those strangers in the crowd, bonded by a common love of what we were watching. Finally, we sat on the bank, smoking a joint and watching a sea of lighters in front of us, as Gomez played ‘Tijuana Lady’ into the night.

I grew up in Staffs, so aside from a brief dalliance at Leeds Festival, Isle of Wight and Bestival, I remained a V girl for a few years. It was easy, and for a time, was the place where all of my favourite bands, and people, congregated during mid August. It was the first blatantly commercial festival, but that didn’t matter when it was on our doorstep. We had our group, but everywhere we went we bumped into friends, ex-boyfriends, ex-girlfriends, acquaintances.  The boys in our group would hook up with a pretty girl and wouldn’t come back until the last day. We fashioned slip and slides through the campsite in the hot weather to cool down, taking it in turns to run to the tap for top ups. My whole tent (which actually belonged to my sister) was stolen one year; carried off into the canvas sea with no chance of recovery. I barely flinched; it felt like one of those things that happen and I bunked in with my friend who traded a snog for a bed for the weekend, which as I fancied him was pretty convenient.

There was a year I went with my best friend Laura, and her other best friend Jen. That was the year the rain came to V, and washed the entire campsite into a giant muddy puddle, the toilets bursting under the pressure. Luckily, experience had told us to always pitch a good distance away from the loos, so we were safe, slightly boggy underneath, but the tent holding up. We bore a messy afternoon trudging through the arena sludge, assembling a mat of paper cups underneath our raincoats in front of the main stage, functional (ie. not Hunters) wellies choked in mud. We spent the next day eating biscuits in the tent, listening to the faint drift of music on the wind, ensconced in our sleeping bags, and having the best laugh of our lives. I look back at that moment and want to cry, it was so great. Lost days, lost in nothing but friendship. And many packets of biscuits.

When I couldn’t go, there was a pang for a summer tradition missed. I remember Glastonbury kicking off when I lived in Crouch End, London, as a student. I wheeled the dilapidated television out into the garden, made a makeshift tent and smoked herbal fags in the back garden in an attempt to get back to ‘that place’. It sounds like pure fucking madness in hindsight, but at the time, it felt so good; it felt connected, it felt like I was still a part of it, even when I was nowhere near it.

There is nothing like the freedom of the festival experience. I’m not going to pretend it hasn’t changed over the last twenty or so years, but then so have I. And in recent times, we have been invited into the ‘other side’  – the VIP area. Clean toilets! Food and clothes and makeup and massages on demand. Hairdressers to sort out your festival barnet. Free food and booze at every turn and celebrities sitting on blow up armchairs through the corner of each eye. It’s not the same – in some ways it’s better and in some ways worse. My husband found himself asking Pixie Lott to pour him a drink at 3am out of the VIP bar one year; I stopped a Sugababe from`garrotting herself on a tent rope another.

We’ve since been to festivals that I barely recognise as a ‘festival’. One last year, in the Cotswolds, had a Joules store and a stand selling safaris. I shit you not. There were kids wearing white dresses and Neff doing demonstrations for a sliding door oven. At one point, I nearly ran the kids in their camping trolley into Holly Willoughby’s legs. I had to check that I hadn’t accidentally fallen into Chipping Norton’s Village Fete. And then the heavens opened, and we were all brought to the basic reality of being at the peril of the weather in an open field, as we huddled into Riverford Organic’s tent (and they kindly fed us on freebies while the storm raged).

Rightly or wrongly, I have no intention of stopping. Festivals are in my blood, they make up my DNA. Come May, I crave that heady breeze in the air, of smoke and dust in the warm air, sweat amongst a grassy scent and the overriding smell of festival bogs. The experience, since having kids, has changed beyond recognition; there’s no visit to the legal high stall for ‘room odorizer’ to assist with the weekend’s proclivities. These days a crafty fag when the kids are occupied is as rock and roll as it gets. We’ve no intention of leaving them at home; we want them to feel the headiness of the festival adventure, of watching live music, of the mass of people collectively together, and of safely sinking into their sleeping bags at the end of an exhausting day.

Next month, we are off to Latitude. We might spend half the day on carousels and the Helter Skelter now, dipping in and out of kids activities; perhaps swimming in the open lake, and spending the rest of the day working out loo v ice cream stalls with a brief visit to stock up at the bar (don’t worry. The kids are sitting on wine boxes in the camping trolley; I’m not completely past it) – but come sundown, we tuck them into their wagon. Blankets, cushions, lights under a canopy, we wheel them towards the main stage, with ear muffs on, where we lose ourselves for a precious hour into our youth and festival experience, and they fall asleep surrounded by love, the fresh breeze on their faces, and Mumford and Sons playing in the background.

How to Take Care of Yourself After Giving Birth
How to Keep Your Style as a New Mum
Maskne Is Real: What You Can Do About It
Traditional vs Digital: How Easy Is It To Transfer Your Betting Knowledge Online

Love this? Share it! You can read Kate’s brilliant blog 13 Ways to Avoid Being a Sweaty Betty; and for the latest from The Motherload®, pop over to our homepage