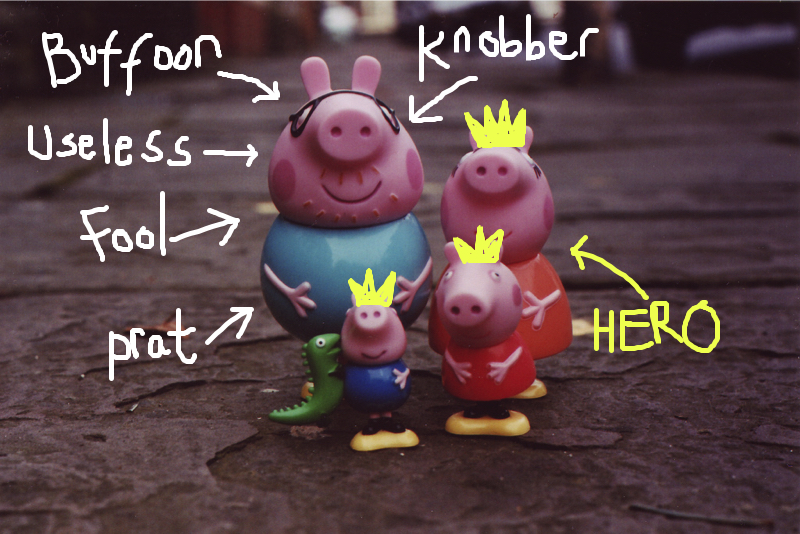 Now, this might sound controversial, but it’s something that’s been simmering away inside me for some time now. So I’m just going to put it out there…

I know, generally, gentlemen get an easy ride.  Society is generally on our side and supporting the patriarchal status quo. And if you’re white and middle class as well, you should have very little to complain about.  But, the writers of Peppa Pig seem to have an axe to grind with us men-folk.  It’s as if they use the show to get payback on all mankind after years of petty domestic disputes.

Mummy Pig is reliable, intelligent, gentle and hard-working, while Peppa and George’s main male role model, on the other hand, is a big fat oaf of a man.  By contrast, at least Homer Simpson is a funny character.  This guy just paints us in a bad light on a daily basis on with very little comedic value.

My daughters often delight in pointing out my similarities to this pathetic porky prick.  “Ooh, you’ve got a big belly just like daddy pig!”, “Ha ha, you got us lost, just like Daddy Pig!”, “Stop snuffling for truffles, you animal!”, etc.  He’s not doing the brotherhood any favours whatsoever, constantly chipping away at our levels of respect with his incessant buffoonery.  So much so, it’s led me to believe this is a feminist conspiracy.  Yes, that’s right. The writers/conspiracists deliver these messages of mister-ogyny (or whatever the opposite of misogyny is called?) and anti-male imagery directly into the minds of our impressionable youth every hour of every day.  Milkshake on Channel 5 is like Joseph Goebell’s propaganda machine, happily disseminating this message of man-hate.

Obviously, I’m exaggerating my exasperation here (I mean, Channel 5 aren’t really like the Nazis. Or are they… ?).  But I think Daddy Pig needs the odd storyline where he may actually do something helpful or useful to support his family, instead of messing everything up all the time, in the interest of balance.  Men do generally provide the odd positive thing in a family home, besides putting out the bins – which, I might add, seems to be a traditional gender role I find even the staunchest feminist is happy to uphold. Not the creators of Peppa Pig, mind. Daddy Pig would be left to fuck that up too.

It’s not a big deal, it’s not really going to have much impact on the world, but please Peppa Pig writers, just give us one episode where Daddy Pig does good! Maybe then, I might start to get a mere smidgin of respect from my two young girls.

(And don’t get me started on the portrayal of boy toddlers that George represents.  No one is THAT into dinosaurs.)