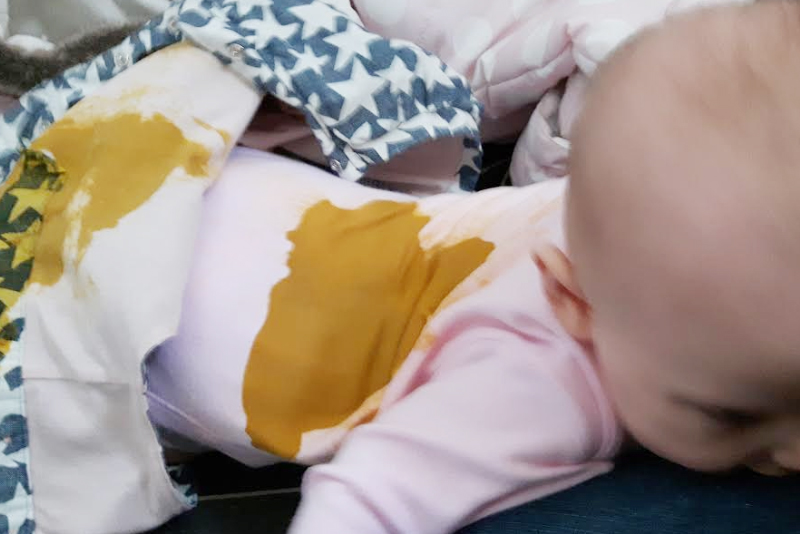 Definition: A monumental infant bowel movement of such quantity and consistency that no nappy stands a chance of containing it, resulting in a disastrous mess.

Before having a baby, I was blissfully unaware; I’d never even heard the word ‘poonami’. The term doesn’t yet feature in the actual dictionary but if it ever does make the cut, I can’t wait to see the startled look on Susie Dent’s face when it comes up on Countdown and she has to splutter a definition.

We’re talking about a tidal-wave of turd, an explosion of excrement, a shower of… yeah, you get the picture. A poonami demands a new level of skill, a strong stomach and a sense of humour.

As parents we develop a complete lack of shame in discussing things in the most disgusting detail. Even when others are eating, no subject is off limits, including the explosive bowels of our offspring.

Apologies if your takeaway suddenly seems less appetising, particularly if you are unlucky enough to be polishing off a portion of chips smothered in curry sauce or tucking into a tasty chicken korma.

The truth is, until you have witnessed a poonami, you will not believe how much stuff can escape in one episode from one tiny person. Shock and awe. The incredibly bright colour is something to behold; you might expect fifty shades of brown yet how does a baby existing on a pure liquid diet of milk create a poo with such a hue? Turmeric and saffron spring to mind. Less fragrant perhaps but just as bad for leaving stains that probably won’t come out in the wash.

Babies have an annoying, sometimes alarming habit of not going for a Number Two for days, storing it all up instead for one almighty outburst. Your little darling will inevitably let loose with the worst possible timing when you are either running late and just about to leave the house, out somewhere with no decent baby change facilities or taking up a kind offer of babysitting having promised they won’t be any bother.

I will never forget the first time my in-laws offered us a rare taste of freedom and a baby-free trip to the local pub. We left them beaming proudly at their precious first grandchild.

Two hours later, we returned to find them both looking a little paler and a little older; she was now wearing the emergency sleepsuit. Grandad explained in a quiet voice with haunted eyes that there had been “a splodge” which was putting it politely from the looks of the laundry bag.

Even now with our second child when we should be unphased experts in the field, there are days when a Code Brown means all hands on deck. Last weekend when we were out for lunch, my husband stood up mid-pizza to whisk the baby off to the loo having sniffed a tell-tale whiff. A minute later, I heard my name being called and the look on his face as he stuck his head round the door said it all; this one’s a two-man job.

With any impending disaster, it is always wise to take advice and be prepared, so how do you survive a poonami and live to tell the tale?

How to survive a poonami

Whatever brand of nappy you choose to use, it will not win this fight. The fearsome fluid will find a way out, whether bypassing the waistband to cascade up your baby’s back or seeping out the other end to run down their legs. The top tip to remember at this point when you are feeling a sense of queasy panic is that a baby vest has an envelope neckline so that you can peel it down over their shoulders instead of pulling it over their head. Nobody wants poo in their hair.

After tearing through a pack of wipes to clean up the mess the best you can, you will stare at the state of the clothes and wonder if they will ever see the light of day again.

It goes without saying that your change bag should always have a stash of spare clothes and don’t forget socks because even if the flow doesn’t reach their ankles, babies have a cheeky habit of kicking their bottoms with their heels.

If only you could channel a bit of Mary Poppins and squeeze everything you might need into your bag or under the buggy; the kitchen sink really would be useful for the worst kind of poonami when a wipe won’t do.

I have also wished for something to change into myself after being smeared but alas usually have to resort to some kind of creatively bold fashion statement like wearing a pashmina tied sarong-style around my jeans.

Last, but not least, the golden (brown) rule in my book is never to utter out loud how much you love a little outfit your baby is wearing. It can be tempting to tell your other half or the lady in the supermarket who comes over to coo into the trolley but no, just stop right there.

The moment you announce that this cute combination of clothes is your absolute favourite, you are dancing with the devil and a poonami is sure to strike.

It is a little-known fact that you will only ever be cursed when your baby is dressed in decent clothing and never in faded, bobbly hand-me-downs that you wouldn’t mind throwing straight in the bin. So do yourself a favour and don’t jinx it with a careless comment.

If you haven’t been dealt the poonami card yet, your time will come. The experience may be harrowing or it may be hilarious but there’s always a story to share.