The Art of Toddler Negotiation
The Truth About: Having Kids Less Than A Year Apart
A Letter to My Brave Boy 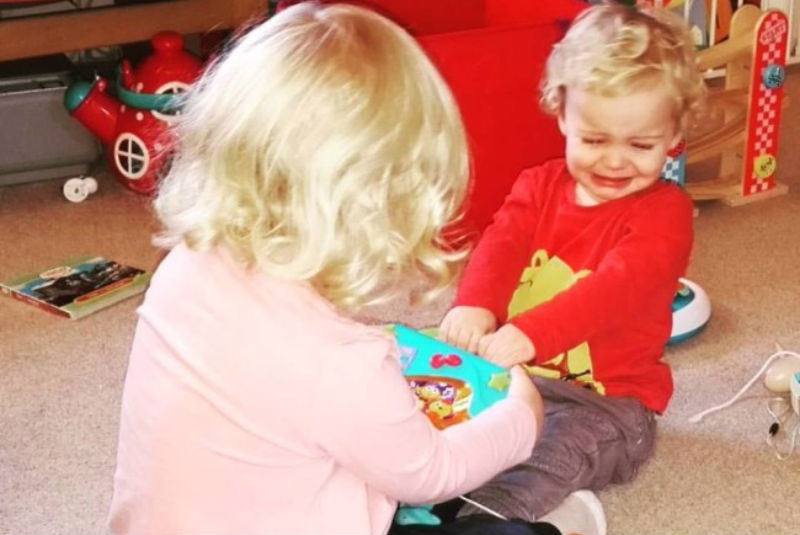 Mummy he took my toy/food/dirty receipt! Mummy I want it baaaaack! Mummy make him give it back to me!

Remind me, why did I have two again? I thought it would be easier somehow, that they would keep each other amused, giving me time to relax and drink tea again. What a chump.

Don’t get me wrong; when they aren’t fighting, they can be lovely. She always looks out for her little buddy (that’s actually what she calls him, it’s so cute it makes me feel like I’m going to explode), and he is bereft when she’s not there.

Oh yes, when they aren’t fighting, it’s like the end of a Disney movie over here. It’s just that they seem to be very adept at it lately; if arguing with a sibling were a competitive sport, I would have two little champions on my hands.

But you have to share, I reply.  Sharing is what nice little girls do.

And if you and your brother don’t stop fighting over the same stupid thing when you have a whole house BURSTING AT THE SEAMS with toys, I’m going to lose my bloody mind.

I don’t blame her. She’s three; she doesn’t have the mental capacity to understand the concept, I realise that much. Her brain is all ‘mine mine MINE’ at the moment, just like her little bro’s, but I wouldn’t be doing my parental duty if I overlooked that fact and didn’t remind her to share each time she and her brother start smacking each other.

I get it, I do. Sharing sucks.

But guess what, kid? As an adult, you don’t actually have to share that much. A bed maybe, but that’s usually with someone you want to share with (at least at first; until you realise they snore and you start plotting their death while they sleep rather than staring lovingly at them… where was I?), and things with ‘sharing’ in the title like starters at Zizzi, and bags of Maltesers; and then only if you feel like it. That serves two-three people dessert can just be a delightful challenge for one.

Even fully functioning adults hate to share; in offices up and down the country, people have written their names on their stapler in Tippex and God help anyone else that touches it. In my old job, a request by management to share bins to reduce cleaning costs was met by panic, confusion and disgust. Possibly even riots; I’d left by then though.

Being a toddler must be hard. As an adult, you don’t expect your friends to come round, grab your iPad or other prized possession and smash it repeatedly against the table leg, and then be told to let them carry on with it.

Just because you haven’t used it in a month, or even thought about it, or you also have a phone and a laptop doesn’t make it any less yours.

So I understand, darling – believe me, I really do. I don’t like sharing either. So get your hands off of my food.

being the mum of a toddler mum of two small children getting children to share I don't like sharing sharing is caring why do kids hate sharing why should kids?