#SleepOnSide: Why we Need to Talk About Stillbirth 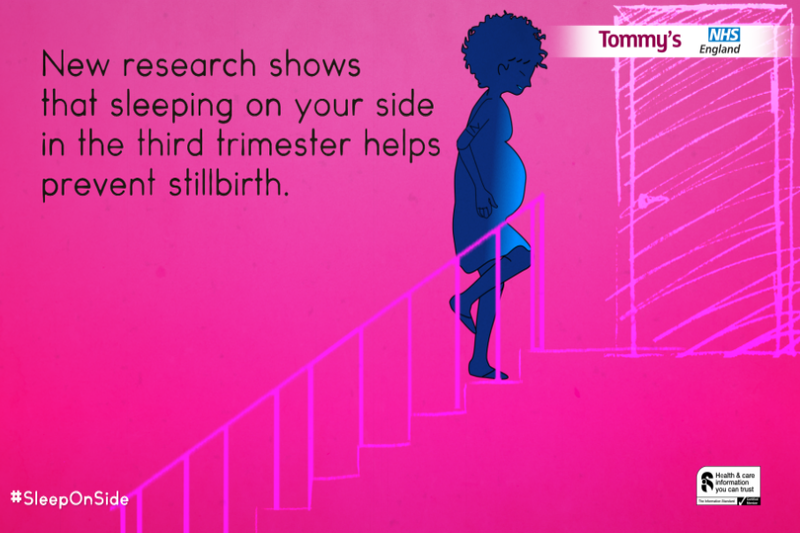 Today, some incredibly important research into stillbirth was published in the British Journal of Obstetrics and Gynaecology, showing that the risk of stillbirth is doubled if women go to sleep on their back in their last trimester of pregnancy. It follows the biggest study of maternal sleep position and stillbirth ever undertaken. Tommy’s, the baby charity is launching its #SleepOnSide information campaign along with this research, giving clear advice to pregnant women to sleep on their side in their third trimester. It doesn’t matter whether it’s the left or right side, or whether you wake up on your back in the night, just make sure when you go to bed, or wake in the night, that you lay on your side to go to sleep. It’s estimated that 130 babies’ lives in the UK could be saved every year with this simple advice. Imagine that; 130 fewer stillbirths. 130 families which are saved from this utterly devastating experience. 130 families who instead get to take their healthy baby home with them.

Here is Sophie and Liberty’s story…

My name is Sophie and my daughter Liberty died two days before she was born on January 5th 2011. I’ve noticed that people don’t particularly welcome me putting like that and of course it is technically correct to say that she was stillborn. Nevertheless, my description is the most accurate to the way in which I can explain my own experience…

I noticed earlier this week that I am pretending to myself not to think about Liberty again. It is coming up to her 7th birthday. I sometimes think that I find it harder and harder to cope with missing her and thinking about her, the older she gets. I miss her more now she is almost seven than I did when she was almost one, when I was still in shock and had no idea how to cope with continuing to live without her. I realise as I am typing, that this is absolutely the last thing that I should be writing. You are not supposed to tell people the truth about awful experiences in case they feel the some of the pain. The worst possible thing you can do is tell a pregnant woman about your experience, in case they start to worry about it. But the thing is, that this is not true to my lived experience either. In fact, I believe that if we talked about stillbirth honestly, far fewer babies would die. If I had been aware that my child being stillborn was even a possibility when I was pregnant, particularly when I was between five and eight months pregnant (and, on several occasions, visited my GP and midwife to report feeling unsure if all was well and concerned that I didn’t seem to be getting any bigger), then I am 100% sure Liberty would be with us, safe and well and snatching my computer from me as I type.

And that is why I will tell the truth, not because every time I deny her existence or pretend that her life and death is less than it is and was, it makes me feel like I have let her down again. I will tell the truth because women are entitled to know the facts that can save their children’s lives.

When the consultant used the word ‘stillbirth’, I remember thinking that I’d only ever heard it once before and it was whilst watching a film set in Victorian times. When I subsequently discovered that over 3,000 babies are stillborn in the UK per year, I felt like I was entering a parallel universe.

How was that possible, when I had never even heard the term in common use?

Stillbirth is life and death at the same time. It is so shocking and unbelievable to comprehend, that it is almost impossible to process, particularly since many stillbirths are experienced by first time mothers. If you remember holding your child immediately after having given birth to them and feeling completely unreal, and if you remember trying to process that someone very close to you has died, then it is both those things at the same time. And I’m afraid that it doesn’t ever get any easier to miss your dead child. It’s just that you get used to living with the reality and you manage the pain and the loss better. But not like the loss of a friend or parent who had a chance at life, and who you had a chance to know.

To be completely truthful, I should now mention other parts of my story…

I have two boisterous, demanding, beautiful, brilliant and affectionate sons who are almost three and four years old. I, (unlike the vast majority of parents who lose their children), have so far managed to stay with my partner and we recently celebrated 10 years of marriage. I felt like, rather than a dinner party, I deserved a Nobel peace price to be honest, because grief on this scale, does not generally bring families together, it more often rips them apart. Nevertheless, despite the huge anxiety and stress that it caused me, I have had two successful pregnancies and now have two gorgeous children. I have a handful of exceptional friends who have surpassed the usual boundaries of friendship, and I have been fortunate enough to afford wonderful professional support to allow me to try to come to terms with the fact that I am a different person than I was before.

I am trying to learn how to accept life as it is and appreciate the profound and valuable lessons that my daughter came and taught me. It doesn’t take me more than a second however, to remember that I could have not learnt all that and she could be here right now with her gorgeous curly brown hair and long skinny legs nicking my laptop…

Finally, on telling the truth, there is one group of people who I am so sorry may read this piece and that is the 20 or so parents who have lost a child in the UK today. They will be struggling to process how they can possibly survive at all and, for them, perhaps it is important that we all pretend that things do get better and that they get better more quickly than they do. But the truth is that their children have died, on the worst possible day they could, just before they got even a chance at life.

Tommy’s are heroic. They are so committed to creating change by raising awareness around this issue and also by means of the research projects undertaken to find out how to reduce stillbirth in the UK. Can you believe that the UK is third from bottom in the developed world with respect to an issue like how many babies die just before they are born? Tommy’s have calmly refused to accept this as a reality and keep moving ahead to create positive change. What’s great about the #SleepOnSide Campaign is that it is news that empowers women and will not only help and reduce instances of stillbirth, it is also another way to raise awareness of the issue in the first place, which I firmly believe will bring the numbers down as an action in itself.

You can find out more about Tommy’s #SleepOnSide campaign, and for the full research visit the British Journal of Obstetrics and Gynaecology. Please do share this article, to inform and empower others. If you have been affected by stillbirth, you can seek support from Sands.

I’m from Lincolnshire, lived in London for 18 years and recently moved out to South Bucks.  I’m a  non-performing professional songwriter working with singer/songwriters and writer/producers in pop, country and folk and I head out to Nashville whenever I can. I’m Head of Songwriting at the Institute of Contemporary Music Performance where I run the Masters Programme in Songwriting, and I am Mum to Liberty, Rocco and Cosmo.  Liberty was stillborn in 2011 and I’m a Campaigner and Fundraiser for Tommy’s Campaign.  Cosmo and Rocco are half Italian and gorgeous, but high maintenance.  I’m also a passionate yogi. You can follow me on Twitter

I am Sophie Alagna personally and Sophie Daniels professionally. I'm a songwriter by trade and I wrote a song called 'I Love You From Here' which I performed live at The Houses of Parliament for Baby Loss Awareness Week. Liberty was my first child. My daughter who died in January 2011, the day before she was born. During 2019, I am ‘Liberty’s Mother’ wherever I go. I will use my identity as her mother and speak her name every chance I get, to try to create change around the issue of Baby Loss. I do this to help myself and, (I hope), others by starting and creating conversations about Baby Loss, in order to raise awareness and raise money for two brilliant charities; Tommy’s and Sands UK.