The Summer of (Camping) Love

Best Freestanding Tents For Backpacking Enthusiasts
The Motherload Guide To: Camping With Kids 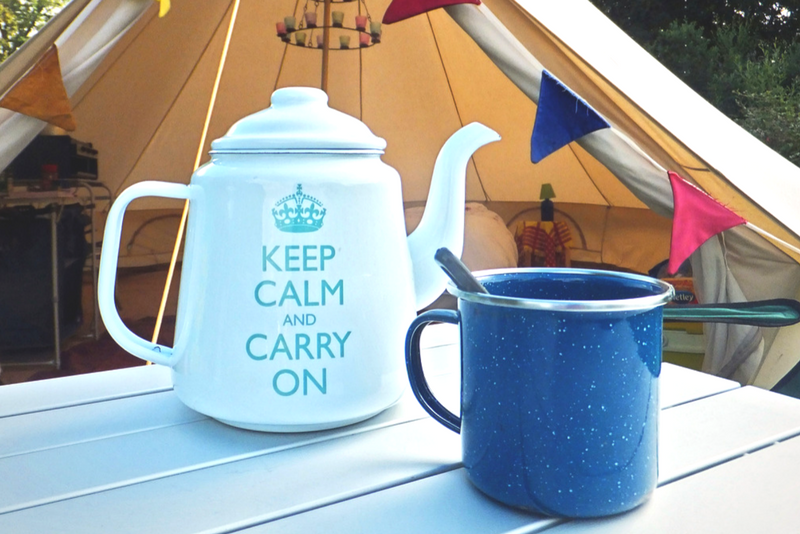 It’s 2am and the wind is howling through the tent and I mentally run through a checklist from when I pitched our temporary home for the night. Shit, shit. Did I tighten every guide rope? Yes. Did I hammer all the pegs into the ground? Tick. Is the door pegged close? Definitely. Is it possible to die by a tent flying down a mountain? GOOD GOD, MAYBE.

One of the bedside lanterns crashes to the floor and the festoon lights clunk against each other as the wind inflates the tent like a parachute about to take off. My nose is freezing, and I need a wee and there is not a hope in hell that I’m going outside. I peel back the duvet on the airbed and shiver as I get up and reach for the largest saucepan from the brand new nest set I bought in the week and let out an audible sigh of relief as I pee into the pan. “Fucking hell” Matt says. “We were going to cook beans in that.”

Forty minutes later and I check my phone to see, joy of joy, that the worst is yet to come. The weather report tells me that by 4am, the gusts will have reached 45 km/hour and I mentally calculate how much wine we have until the morning, if the worst happens.

“What the hell were you thinking?” he says, as he shivers and warms his hands between his legs. “Don’t try and persuade me again that April is a good month to go camping”. I shrug. We’ve just been a tiny teeny bit unlucky and it’s not like anyone has died.

“It’s like that bloody film” Matt chatters. “You know, where the plane crashes and they have to survive in the snow and end up eating each other”. I’m pretty sure that it’s not quite like that but Matt appears to be so deadly serious I daren’t point out that he may be just slightly over-reacting and I start laughing at the absurdity of us camping in a hurricane in April. And I love every single minute of it.

Camping is my happy place. 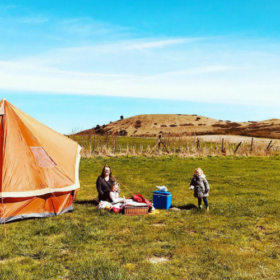 When I was a kid, we camped on many holidays, as most families did in the 80s. Haven camp in the UK, in Dorset, Isle of Wight, Cornwall – and Eurocamp in France. We spent many a night under canvas, reading, escaping, enjoying (often arguing) time together as a family, swinging in hammocks in the trees, playing UNO (obviously no camping trip is complete without UNO) and eating the charred BBQ that my Dad controlled with a stern glare and a mad panic for everyone to sit at the table when it he declared it to be ready. I have memories of being tucked up in the wind and the rain as much as the sunshine, sweaty mornings under the polyester and shivers in my sleeping bag at the end of another exhausting day.

When I was thirteen I joined the scouts to meet boys and importantly, go on camping trips with boys (and then be totally put off boys for a long time after a slobbery snog behind the entertainment cabin), singing out of tune camp songs and eating endless stews and jacket potatoes while learning how to do knots in any old rope for a badge and shitting myself on an abseil down a 40 foot rock face and having to go canoeing in the rain and getting stuck in the rapids (not really rapids but try telling me that at thirteen) and finally falling asleep in the night after terrifying each other with the Candy Man ghost story.

In my twenties, I would pitch up to various festivals with a basic tent (one of which got nicked at V festival. The actual tent. The whole tent. I went to watch a band, came back for a lager and a spliff and the entire tent had been carried off, never to be seen again.), sleeping bag, biscuits and 2 boxes of wine and a slab of lager for the weekend. I’ve survived hellish hangovers in a sweltering tent in mid-August and the mud bath of Glastonbury in June with only a packet of wet wipes for comfort. 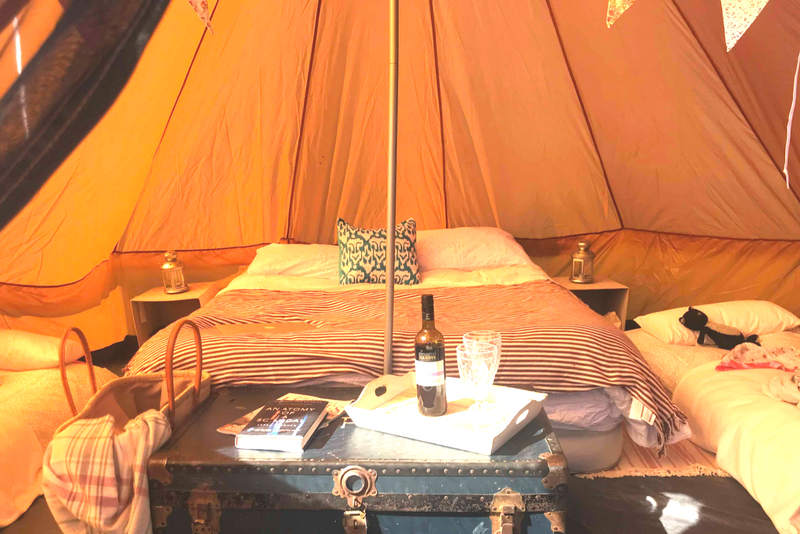 So, I’ve served my time on the basic end of camping life. And now, I make no apologies for camping with a certain ‘je ne sais quoi’. Last year, with some vouchers from the in-laws, I bought our first fake bell tent, the Mojave 10T 500. “Let’s get this polyester version.” I said to Matt. “We’ll try it, see if we like it, and then look at canvas ones in about five years”. I was actually on the hunt for a canvas bell tent the next day, but don’t tell him that. “If it means we can have some cheap holidays, let’s do it”, Matt said, not quite understanding where I was going with this, I think.

My, sorry – OUR – kit now consists of all the essentials one needs for a relaxing stay under canvas. Cushions, bunting, lanterns, duvets (as well as sleeping bags), a queen deluxe electric airbed, nested saucepans (minus one), and wine glasses. We have bedside tables, rugs on the floor, a doormat, festoon lights, LED tealights for ‘mood lighting’, games and crafts for the kids, a basket of blankets for sitting outside on the camp chairs and a whistling kettle. Vintage style enamelware adorns our table, with proper cutlery and even, napkins. You can’t properly glamp without a napkin. 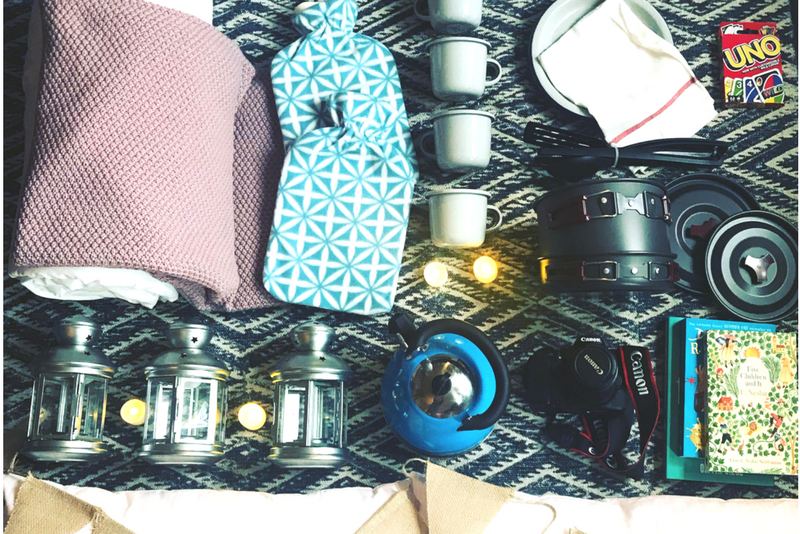 For now, I glamp. I love nothing more than snuggling under my down duvet, listening to the wind and shitting myself that the tent might actually blow off from around us because I couldn’t be happier. I get the same sensation of relaxation from just thinking about being in my tent as I do from thinking about having a massage. It’s like building a den as a kid, putting all the bits and bobs together, setting up camp and playing house with all our bits out – like the tray for the wine, obviously, and the basket for the blankets that are specifically just for sitting around the fire later. 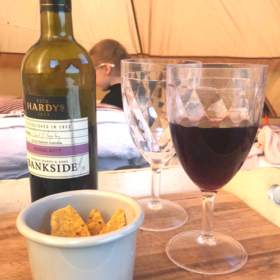 It’s not all frippery though – the trunk that sits at the end of our bed is also our coffee table and when we aren’t camping, I keep all of our bits and kit in it, so we just have to lift it into the car when the yearn to escape for the weekend comes over us. Well, me.  I have a checklist for car camping and a checklist for festival camping because you know, you can’t carry everything for two miles across a festival site but I do have a camping truck that we can transport the trunk in and then use to move the kids around later on. The festoon lights are pretty but also pretty useful for actual lighting as they are bright, and the rugs do have a purpose in insulating the floor a tad. The bunting, I concede, is useless but it does look pretty, right?

Camping isn’t for everyone, I know. Some people hate the mere thought of spending even a night under a fabric roof, often because they have heard horror stories about mud and rain. And there are of course those who take it uber seriously in their North Face jackets and their Hi-Gear Elite tents and OEX sleeping bags and who eat freeze dried food to just ‘immerse’ themselves that bit more.. But for me, the happiest place in the world is in our (fake) bell tent, with it’s cheery and comfortable home-from-home vibe, listening to the wind rustling the leaves and the birds singing in the trees and the kids playing around the tent, relishing their freedom to roam in the field and just enjoying being free. That’s what any type of camping is all about – freedom. And it’s addictive, I promise. “Alright”, says Matt. “It wasn’t that bad now we are home and have survived it without resorting to eating each other’s limbs. Where are we going next then?” See?

So this summer, we’ll spend a lot of it under canvas, sometimes shivering, sometimes sweating, but always in the comfort of our little bell tent, with cushions and bunting galore; the Summer of (Camping) Love.

Pin it for later! 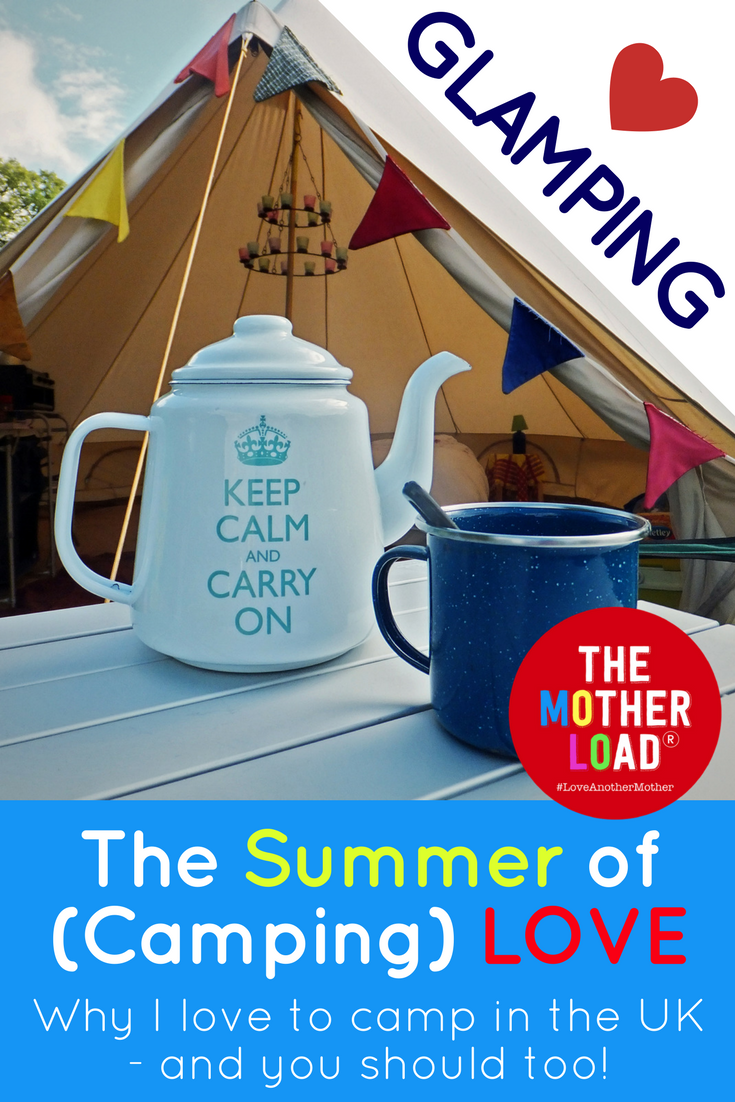