The Lie-In: Dad versus Mum 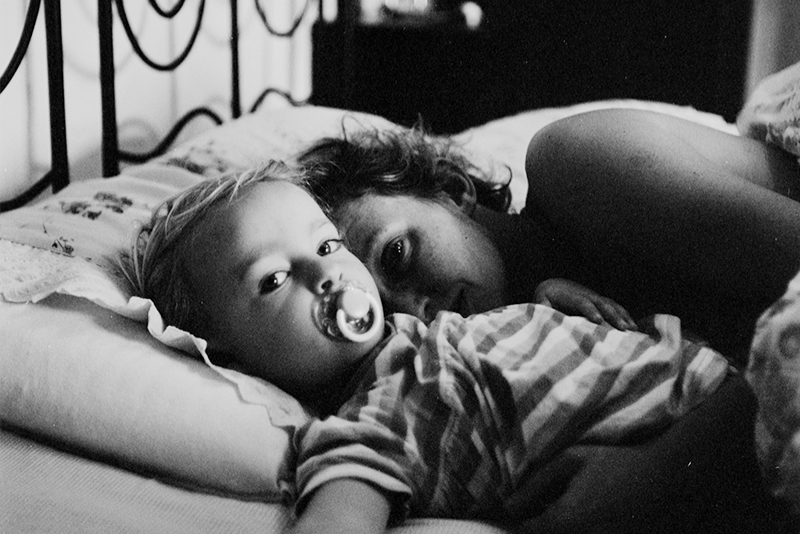 Lie-ins. Remember those? No? They certainly aren’t as frequent as life BC (before children) but every so often a miracle occurs and we’re reminded of those halcyon days when we rose at the crack of noon and no-one jumped on our faces or tried to stuff lego into our noses. Bliss. But in these post-children days, the lie-in isn’t what it used to be. We take turns and there’s a BIG difference in how that works out…

1) happen pretty frequently, depending on mum’s work routine. The ratio of lie-ins is 2:1 in dad’s favour.

2) flow straight from his night’s sleep. One long, lovely stretch of slumber. The kids may well be in the parental bed, but they will not be rooting for his breasts or jumping on his head. They may well be making a lot of noise but dad can just dream on, uninterrupted. This is because dad has the ability to sleep through pretty much anything. This is a very useful tool in both claiming a lie-in and successfully executing it.

3) aren’t interrupted, apart from when a cup of tea is left on the bedside with a whispered “tea for you darling”. Of course, it goes cold: dad can sleep through anything.

4) mean the children get some quality time with mum. Breakfast, followed by playtime, and probably getting dressed. If everyone’s behaving there may even be some colouring, or baking (okay, this doesn’t happen THAT often. But it’s not unheard of).

5) end somewhere around 10am, when he emerges, fresh from his extended sojourn to a clean kitchen, and a cup of microwaved tea. Breakfast may or may not be served; this depends on resentment levels (see 2:1 ratio).

1) happen once a week, if she’s lucky. She may well give up a lie-in because of the situation outlined in point 2.

2) never flow straight from her night’s sleep. They usually involve waking some time between 5.30-6.30, supplying milk and slippers to small folk and turning on CBeebies in the vague hope of not fully waking up before her deluxe lie-in can begin at around 7.30 when the children will finally be taken from the room (grudgingly) for their breakfast. Mum will be fully awake because small folk will be jumping on her head and rooting at her breasts. And when they’re not doing that they are trying to destroy one another.

3) are always interrupted. ‘Here’s the baby, she only wants to be with you’ or ‘Mummy, I hurt my toe. Kiss my toe’. They are rarely interrupted by the whispered delivery of a hot, caffeinated beverage.

4) mean the children get some quality time with dad. Breakfast, followed by Saturday Kitchen on the TV while dad dozes on the sofa and the children completely trash the lounge.

5) end somewhere around 9am, depending on how well dad’s sofa nap went. When mum staggers from the bedroom, feeling worse than she did at 6am (but better than she did at 3am) she goes to the kitchen to make her own cup of tea and pick up 857 wet Cheerios from the floor.

Love this? Why not give it a share and spread the MOLO love! Read more from the Dad versus Mum series and for the latest brilliant blogs from our writers, pop over to The Motherload® homepage