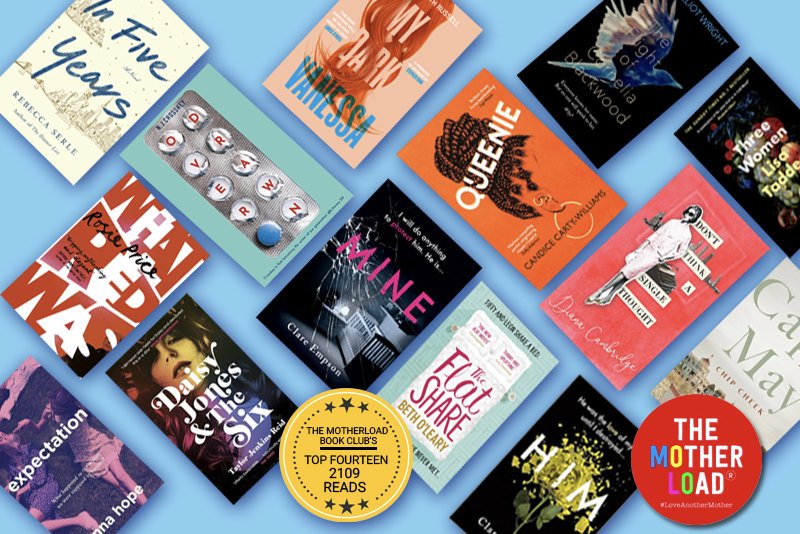 In this, The Motherload® Book Club’s second year, I’ve read and listened to almost one hundred books. And when it came to narrowing them down to ten, I completely failed. So here’s my top fourteen (in alphabetical order by title).

Cape May by Chip Cheek

Cape May is set in New Jersey in the late 1950s. Henry and Effie are young newlyweds, exploring their relationship and one another on their honeymoon, when they happen to meet the enigmatic Clara, her lover Max and his half-sister Alma and are thrown into a world of glamour and debauchery. I was addicted to Cape May, and read it with an urgency I don’t often feel.

Daisy Jones and the Six by Taylor Jenkins Reid

I took this account of a fictional 1970s rock band with me to a spa and gorged on it over 24 happy hours. I was pretty sure it would be my book of the year, and it is. It’s simply captivating. Like everyone who’s read it, I was desperate to listen to The Six’s music, despite knowing they didn’t exist. There’s a reveal at the end that is simply perfect, too.

This slim volume packs an almighty punch. It’s a character study like no other. While holidaying in The Hamptons, Emma Bowden is caught up in the drowning of a child, and this is the catalyst for all kinds of information about her troubled past to spill out. It’s breathtakingly beautiful and entirely immersive. It doesn’t read like a debut. It reads like a classic.

I’ve rarely felt as seen as I did when reading this novel about women in their thirties and how their lives aren’t quite matching up to what they’d expected. It deals with the thorny subject of wanting, having and not wanting children, and about time, too. There’s love in this story, but the true love story is the friendship between these three women, and what it can, and will, survive.

Him by Clare Empson

I tore through Empson’s debut at the very start of the year, spellbound. Finding an author whose writing is perfect for you is a rare thing, and I felt that’s what I’d done. Him is a story of privilege and excess and the kind of first love that haunts you for decades. With a reading queue like mine, I very rarely don’t want a book to end, but I would have stayed with Empson’s writing for months.

In Five Years by Rebecca Serle

Thinking about this book makes my heart fluttery, weeks after I finished it. The premise is brilliant – Dannie has her life mapped out, but on the night of her engagement she wakes up five years in the future, and she’s with a different man in a different apartment. Back in her normal life, she tries to convince herself it was a dream, until she meets that man, and he’s her best friend’s new boyfriend. I inhaled this one. It’s gorgeous.

Mine by Clare Empson

Having adored Empson’s debut, I put her second novel, Mine, right at the top of the pile as soon as it arrived. I was nervous, but I loved this one, too. She’s such a skilled writer, creating worlds you can see and hear and feel with prose that’s as beautiful as it is compelling. This one goes back and forth between the 1970s and the 2000s, with a tale of art and music, adoption and loss. It’s stunning.

Vanessa first had sex with her English teacher, Mr Strane, at the age of fifteen. But she doesn’t view it as abuse. She views it as her great love. Russell’s examination of predator and victim is fascinating. In a clear, unfussy way, Russell shows how Strane’s abuse has infiltrated every aspect of Vanessa’s life: her studying, her career, her friendships, her relationships, her family. It lit a fire in me, and I’m sure it will in many, many readers.

In Overdrawn, growing old is seen as selfish. People are assigned credits to use for healthcare and education. Henry’s wife has dementia and Kaitlyn’s brother is in a coma, and both are running low on credits. When Henry and Kaitlyn meet and share their stories, they come up with a plan that might just solve both of their problems. But in carrying it out, they realise that it creates just as many issues as it solves. Shocking and brilliant.

Queenie is an unforgettable heroine, and this is not your average rom-com. Yes, there’s love (well, there’s certainly sex) and yes, there are laughs (and plenty of them), but this is a cut above the genre’s average. It’s so real that I felt a little like a voyeur looking in on Queenie’s life. And the ending (which I won’t give away) is pure perfection.

The Flatshare by Beth O’Leary

One of the year’s big novels, The Flatshare had such a promising premise and I really hoped it would live up to it. And it did. Tiffy and Leon share a flat, and a bed, and yet they’ve never met. He works at night, she works in the day. Slowly, they develop a friendship via the medium of post-it notes and offers of food. By the time they met, I was practically screaming for them to do so. It’s not without its dark moments, but this book is a true joy.

The Flight of Cornelia Blackwood by Susan Elliott Wright

This is a novel that goes back and forth between a woman on the brink of having it all and the same woman having nothing left, and as it unfolds, we start to see how she’s gone from one state to the other. It’s a devastating read, but a compelling one, too. I raced through it, desperate to find out the answers. And when I reached the end, I clearly remember lying on my bed in silence for a long time, trying to take it in. So powerful.

This non-fiction exploration of three women’s desires was as gripping to me as any thriller. The author spent years with the women she portrays, and it shows. I was wholly invested in their lives, and felt their pain acutely. I don’t read a lot of non-fiction, but I would if more of it was like this. Truly captivating.

What Red Was by Rosie Price

This novel is astonishing. The writing was so fresh, so vivid, so seemingly simple, and yet it gnawed right under my skin and into my heart. I don’t think I’ve read anything that focuses so completely on a sexual assault and the aftermath, with prose that’s as sharp as a scalpel. I felt horribly uncomfortable at times, but knew that I couldn’t (and shouldn’t) look away.