My Three Year-old Boy Plays with a Pushchair

Why the Gender of the 13th Doctor Who Really Does Matter
Gender Neutral Parenting: Are you Team Blue, Pink or Yellow?
#Is It OK? 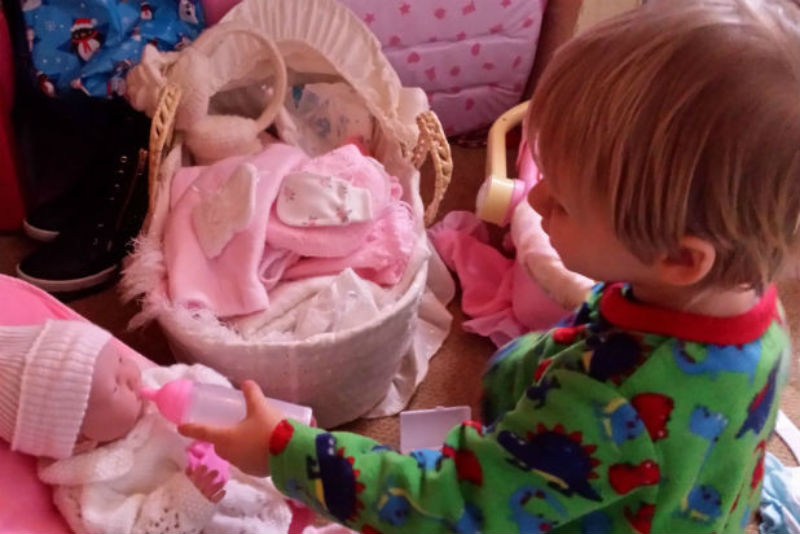 My three-year-old has a baby doll stroller  – not one he sits in, one he pushes his toy robot in. It is his very own pushchair, not his big sister’s, his.

Before buying said stroller, I ran the idea past my husband, who shrugged and said “no problem”.

The other day, my son asked if he could take his pushchair to school when we went to collect his big sister. I have to admit, I wavered for a second – what response would he and in turn, would I get?

Then, I cast any fleeting doubts in human nature aside and off we set. When we arrived, the playground was heaving and my boy was busy weaving around the parents who were waiting for the classrooms to file out.

A handful didn’t. They just looked at him as if it was the oddest sight they had ever seen.

I didn’t care either way but it did get me thinking.

I took to Facebook, the place where I and my friends sometimes share parenting tips and I posed this question, along with an image of my son ‘feeding’ a doll.

“Is it okay to let little boys play with dolls and pushchairs?”

Their overwhelming reply was YES! The comments came thick and fast. I noticed, without exception, everyone who had an opinion was female, despite me inviting dads to share their thoughts.

One mummy friend said: “I think it’s perfectly normal. I buy my five-year-old son the Disney Princess magazine because he loves it. He’s also got the Frozen dolls like Elsa and Anna that you dress up. We’re in 2017 now.”

Another mum with a 10-year-old boy echoed the same sentiment, saying: “Yes it is okay. I hate the stereotype of ‘boys will be boys’. What is that teaching them? There are many films showing the sensitive bumbling male as the hero! My own son at two, (then an only child) had his own cooker and ironing board that he LOVED! I believe he will become a modern man, sensitive, empathetic and know how to keep a house!”

My little boy also has a vacuum cleaner and a toy kitchen with a set of wooden food but I didn’t find these items by searching for ‘toys for boys’. When I did a Google search, specifically looking for ‘boys’ toys’ I was presented with cars, boats, trains, planes, playsets featuring all three 999 services, tools, building blocks, dinosaurs, rockets, guns, swords, cowboy outfits… You get the idea.

I searched, tirelessly for several hours looking  for a UK toy shop website showing a boy playing with a baby doll.

Hats off to Toys ‘R’ Us in Sweden, however.

During my research, I did come across a story from 2012 where the Scandinavian arm of the international toy giant had come under pressure to become gender neutral.

As a result, it changed its catalogue to picture boys playing with Barbie Dreamhouses and girls ready for a play fight with the latest Nerf Gun on the market.

Top Toy – which holds the franchise for Toys ‘R’ Us – had to adjust the images in its own guide after being reprimanded by the country’s advertising watchdog for ‘gender discrimination’ in a previous catalogue, which featured boys dressed as superheroes and girls playing princess.

The UK Toys ‘R’ Us website has not gone this far. Its website is peppered with the kind of stereotyped image we take as the ‘norm’.

However, I was heartened to see there isn’t a ‘gender filter’ on the Toys ‘R’ Us UK website.

We are maybe making some progress.

So, here is the thing, if the small online poll among my friends is anything to go by, am I to believe 100% of mums are happy for their children to play with ANY toy?

This may be because most of the mums I know are open-minded, well-rounded people, or maybe we just really appreciate any toy that affords us 20 minutes of peace.

So, who is bothered about gender-appropriate toys, (if that’s even a thing)?

One mum chum who has three older children had this to say: “My first child used to run into the toy shops to push prams. His dad wouldn’t allow him to have one, so I used to just hang around in the toy shops and allow him to play with the ones there! However, when my girls came along a few years later he was never interested in playing with any of their toys, dolls or prams. Just let them do what they like and be happy. Why make them feel bad and deny them for merely copying what they see mum do daily?”

Another mum of a boy and girl, told me how she has encountered first-hand how judgmental boys as young as four can be: “My boy gained a little sister just as he went to school and that was the first time we encountered the sneering and humiliating of anything ‘girlie’ from other boys at school. So much so he would look nervously at me to check if something may be perceived as a girl’s toy or pastime and if he wasn’t sure, he would reject it just in case, to avoid embarrassment. We live in a very middle class, bright, liberal area and these boys at four were already indoctrinated that anything ‘girlie’ and by extension, girls themselves, were rubbish and to be avoided and mocked. It was horrible to see and impossible to counter.  It really isn’t quite so virulent the other way round.”

And right there, perhaps,  is the crux of the problem. Girls are increasingly being told they can ‘do anything’ – there are entire campaigns dedicated to getting that message out there: ‘This Girl Can’ springs to mind. On the flip side, boys are subliminally, or otherwise, receiving the message that doing traditionally ‘girly’ or ‘feminine’ things is somehow embarrassing.

The upshot of this is that both genders start to buy into the idea that things like childcare, expressing emotions, crying etc are somehow ‘lesser’ and ‘for girls’ whereas science, exploring and so on are ‘for boys’. Ultimately, this can stifle both genders as it means they are less likely to express themselves openly and be true to what they like to do.

I’m no child psychologist but it seems pretty obvious that both boys and girls learn through play and through play they learn how to express themselves, and stopping that because the type of activity they choose isn’t gender appropriate can be damaging to them and to society.

It all starts with play.

So, when it comes to toys,  let’s ditch the stereotyping.

I’m all for marketing toys as gender neutral.

If it makes them happy, I will encourage my son and my daughter to rock a baby doll in their arms, wear a princess dress or a Hulk costume, build a Meccano car, or experiment with slimy science kits.

My hope is, as my children become adults, their role in society will be dictated by their interests, talents and personality, not which set of genitals they happen to have been born with.

Like this? Give it a share and spread the MOLO love! You can read more from Sam or for the latest from The Motherload®, pop over to our homepage

Sam Curtis, 46, lives in Lincolnshire, in a house that’s not as clean or tidy as she’d like with her husband and their two children, a tweenager and a threenager. It’s a riot. You can follow her on Facebook and Twitter