Why Mums Are Gripped by Bodyguard 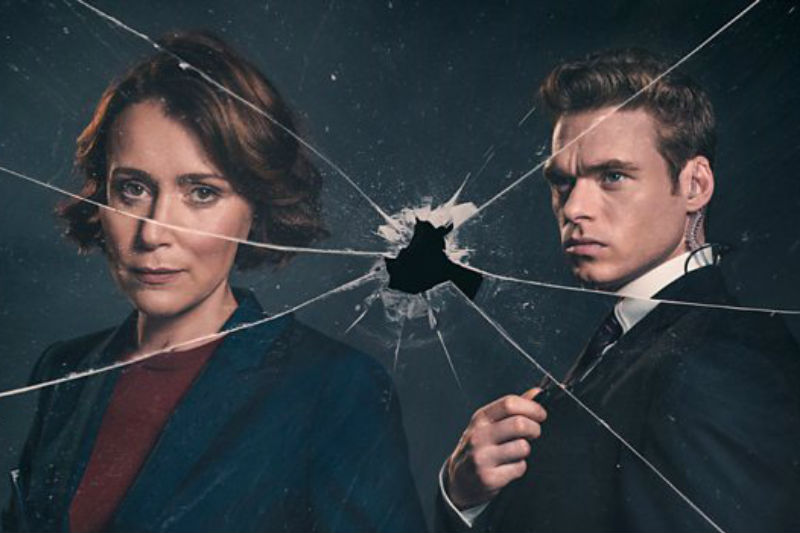 I work around 900 hours a week. Holding down a full time job, mothering the wombfruit that is my 8 year old, loving my husband and making 57 meals a week that are rejected for shreddies on a loop has made me tired. I worked through most of the summer holidays and during my week off on holiday whilst drinking a vodka and coke slushie, a tick embedded itself in my thigh and injected me with lyme disease. Meaning I had to take antibiotics that made me allergic to sunlight. All in all, a total result of a holiday I am sure you will agree.

So then, after the first day back at school this week, with a final demand notice for the lunch money to be paid and mad dashes with scooters and book bags swinging in the wind, I collapsed in front of the TV and declared I wanted to zone out and be able to stare into space without anyone asking me for anything . I opened a can of supermarket brand Pimms and swore numerous times as I attempted to negotiate my way around BBC iPlayer after the husband mentioned he had heard about some thing called Bodyguard and it sounded like the police stuff we like to watch. Hurrah. Another crime drama. Ne-naw ne-naw. The sound of my kids toys coming through my TV. Amazing. The excitement almost bowled me over. I made a mental note to fall asleep after eating a family sharing bag of chocolate buttons.

Well, well. Melt me in butter and roll me in a pile of hot nuts. I didn’t fall asleep and I was so gripped, the chocolate melted between my boobs after I had forgotten I had put them there . This was no ordinary crime drama. No, no. Not only did it have an amazing female lead, in the shape of the super-talented Keeley Hawes playing a character in a position of power, the Home Secretary Julia Montague, but it also featured her personal protection officer, played by Richard Madden from Game of Thrones.  He plays PS David Budd but we can call him Dave. It is his job to protect her during a period of heightened security and he takes this very seriously. So much so that he ends up laying on top of her in bed, like a human shield. With a really nice face.

It had quite the impact. I spent all day after watching the first three episodes in one go, dreaming about having a bodyguard . Everyone was talking about it and I found myself engaging in conversations with people I had never even noticed before. I wandered around the streets in my lunch break in the hope of finding a chiseled copper to escort me and knock anyone who dared to go in front of me in the sandwich queue out of the way but alas, my search was fruitless. I went to Greggs on my own instead and got a steak pasty and dripped it all over my A4 note pad whilst I Googled how to get yourself a bodyguard.

My mind ran amok. Imagine having one around the kids? They would check the room before you went in to see if the little darlings were there, lurking, ready to attack you. And if they were, before the words “ Mummy, I want a treat” could be uttered, you would be bundled into the bedroom to safety by his big buff arms. Those arms could protect you from all the flying lego that is launched your way. And when the Barbie house is lobbed across the room in a tantrum? Mr Muscle would catch it in one fell swoop.

Imagine doing the school run with him. I could have a code name. National Treasure maybe? Pink princess? Nutcracker? As we pull up to the school gates, my copper could clear the ice cream van out of the way whilst saying into his ear piece “ Nutcracker has arrived”. I would sashay into the playground and set him to work to find my kids PE plimsolls and the reading book from last year and if anyone attempted to come to me to see why my kid didn’t do his homework, he could bundle me into the car and drive me away in a protective cover.

Episode two finally sent me over the edge that I was barely clinging on to. When Dave ended up in bed with Julia and gave her a grown up cuddle without even taking off his shirt and suit jacket, my mind imagined straddling the husband while he ate a bowl of puffed wheat cereal and lactose free milk. I mean, I wasn’t looking quite my best at this point, you know, with it being 11.15, having shaved one leg whilst on the sofa, with the other hand filling in the school swimming permission slip and wearing my kid’s football socks as my feet were cold and I couldn’t find the pliers to turn the radiator back on, but at that moment, I considered myself something of a goddess.  It wouldn’t have played out quite as well as on screen. My husband is pretty buff and the arms pass the regulation tests of big-ville but attempting to negotiate the sofa while the pet rats were running around the living room means I would slip on the swimming permission slip and I get a face full of milk splashed in my crotch as the puffed wheat flew through the air.

I would like to thank the Bodyguard for setting my mind alight in so many ways and I think I am in such a dazzled daze , that I might actually explode during tonight’s episode. So many questions. Does David/Dave as Julia calls him actually hate her and feel full of rage for her views? But does he also have the raging horn for her and find the power she holds and talks about so often to be alluring? Will she find out he has been listening to her secret conversations through their adjoining bedroom doors? Will his past and connections to the man who tried to kill her be discovered? Will Julia kick him in his protective nuts if she does find out and toss him out of bed?

I am going to sit on the sofa , about 1 inch away from the TV, munching on biscuits as it all unravels and promise my kid a saucepan full of Angel Delight if he goes to bed and lets mummy watch the grown up programme.

I’m pretty certain no one wouldn’t kick the Bodyguard out of bed for eating biscuits. Man alive, we could hand him the whole box of Family Circle and tell him he could merrily crunch them all into the pillows if he wanted. I don’t think anyone would have problem rolling onto a jam sandwich cream if you knew he would be performing a commando roll onto you at any moment? The Bodyguard has allowed this busy brain of mine to perform a commando roll into dreamland and it’s been a right old hoot.

If there isn’t a second series, I will eat my kid’s homework book. I mean, we all need a Dave in our life to dream about on the school run don’t we?

Eve is 40, is mum to her son Joe who is 10 and in her proper job she does important government work whilst clad in pink stilettos and a rara skirt. A survivor of Postpartum Psychosis, she coordinates the UK Maternal Mental Health Awareness Week each year and can usually be found brewing homemade limoncello whilst drinking wine could through a feathered straw.