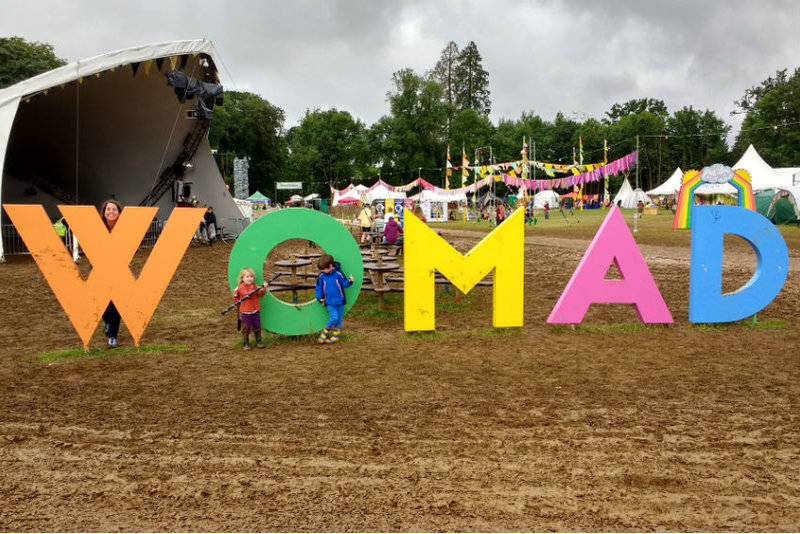 We arrived at WOMAD’s 35th festival in the stunning Wiltshire countryside at Charlton Park on Saturday ready – but a little apprehensive about our first festival as a family.
Tent pitched in a quiet spot in the family camping area, we moseyed through the Wellbeing area, offering massages, and all sorts treatments in colourful little tents beneath the trees. We found our way to the World of Children, a gorgeous corner, packed with loads of stuff for the kids to see and do. Within our first few hours they had ridden the swing boats, danced with the Midsummer Night’s Dream-esque Morris Dancers, taken part in an amazing beatbox tutorial/ storytelling session, eaten blue liquorice (bad idea), played the violin, the ukulele and the Big Rig –  a creative assortment of cutlery, bells and pans, made into a brilliant percussion area – they watched Punch and Judy, chased gigantic bubbles blown by a blue-haired fairy, were mesmerised by giant marionettes… And the list goes on.
We decided to make our way through the fluttering, colourful flags and the fairground to brave the main stage. Although the kids were going a bit crazy and running around in circles, they managed not to knock anyone’s beer over, or trash anyone’s picnic (we like to take our victories where we can). When the music started they were dumbstruck – loud, rocky rhythms played by Bombino who hails from Niger – we even managed a bit of a dance before it was time to peruse the food stalls and get the kids some dinner. The choice was amazing – food from all over the world, Philippines, Mexico, Thailand, France, Greece everywhere. The kids played it safe with chips and humous…
Then came the rain. ‘It’s just a shower’ said my husband ‘Let’s just stay out until it passes’. It didn’t pass for nine hours. We ran for cover and came upon the phenomenally talented Loyle Carner on stage in the Siam tent – he was amazing and even had a sign language interpreter on stage with him! The kids were exposed to more F-bombs than on a two hour road trip with Daddy but I’m not sure they noticed. By the end of the set they were well and truly feral, and drenched, so we plodded back through the downpour to take shelter in the tent, to discover – quelle surprise – that a £25 tent from Tesco leaks at the first available opportunity.
I was so busy soaking up pools of water (disposable nappies did an excellent job) that I forgot that the children had never slept in a tent before and would be so giddy with excitement that it would counter-balance the exhaustion from walking around a festival all day, so bedtime was spent trying to keep them away from the leaking edges of the tent, and also away from the central pole which they were intent on trying to pull down.
If you’re struggling to picture this, my four year old did this drawing of us, our tent and the rain: 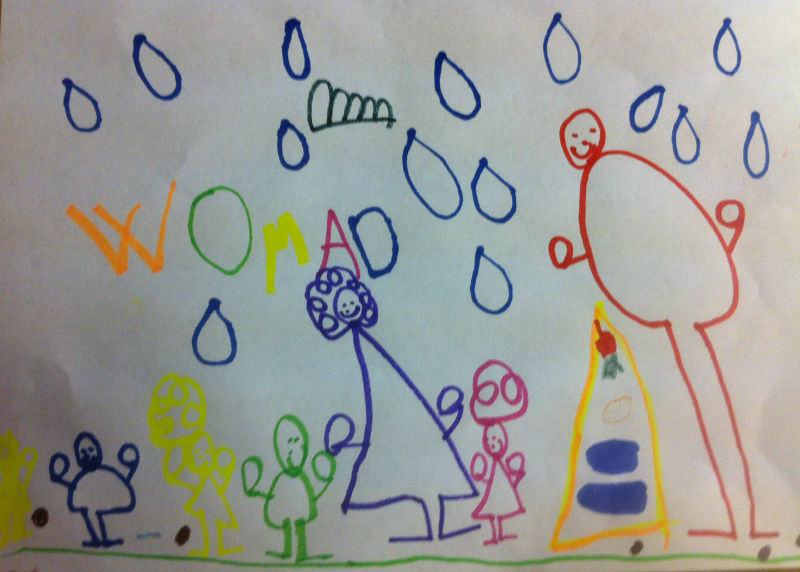 Anyway, I really needed that post-bedtime glass of wine, sat on my little collapsible stool outside the tent, listening to the music wafting across on the evening air. But alas, it was still pissing it down, so I put on my jim jams and settled down for the night. Or for half an hour, when I realised my sleeping bag and one pyjama leg were soaked through…. Note to self: never, ever buy a £25 tent again.
I’ll be honest, I spent most of the night freewheeling between:
a) plotting to divorce my husband (who had popped out for a kebab and gone to the main stage for three hours).
b) fully intending leave the festival and go home at 5am.
c) fretting that my children were going to drown in the tent puddles.
It was a long night (did I mention it rained for NINE HOURS?) but we woke at 6am on Sunday to blue skies, little fluffy clouds, and sunshine. Because there’s not much to do in a bijou, sodden, four man tent (you’d never fit four men in it) we got up and went exploring. The plan was to brush our teeth, go for a little walk to the loo, then pop to the campsite cafe and check the state of things after all that rain. The reality was slightly different: less WOMAD, more WO-mud. Thick, oozy mud. And everyone had wellies except me.
It wasn’t long before the two year old slipped and planted her hands on the muddy floor of the portaloo, then the four year old did a comedy skid on the mud but got away without too much damage.  After an epic hike, with a few wrong turns and a romp around various service vehicles being towed out of the mud by a tractor, not to mention navigating the quagmire next to the shower cubicles, we finally made it to the cafe. And the two year old fell over again, getting a good coating of WOMAD’s finest mud from the elbows down. It was emotional. With the help of some kind women in the queue (the people we met at WOMAD were all LOVELY) we got cleaned up and prepared for the slide back to the tent. You do not fully appreciate the thrill of danger until you have tried to walk across a sea of mud, whilst holding two hot drinks, four croissants, and a filthy toddler hand. Did I mention I forgot my wellies?
Anyway, we made it! And the sunshine filled me with renewed optimism after such a sorry night. So slip-sliding over the mud, we headed back to the kids area, where we met up with friends and had a bonza morning, doing craft, parachute games, Brazilian dancing, more music, more bubbles, and there were plenty of places to dodge the showers. We could have spent all day in the World of Children and the brilliant Physics Pavillion – there was so much for children to see and explore. One of the best things about WOMAD was just seeing the children respond to new experiences, to watch them discovering so many new and exciting things in such a short space of time. Just gorgeous.
Eventually, the mud, the showers and the exhaustion beat us: it was time to head home. WOMAD, you were a brilliant, colourful, chilled out, noisy, friendly festival, we don’t blame you for the rain or the mud or for how crap our tent was, we are still dining out on the memories and would love to see you again some time.
Like this? Share it, and spread the MOLO love! You can read Kate Dyson’s brilliant blog Mosh Pits to Sandpits: My Ever Evolving Love of Festivals

Disclaimer: WOMAD very kindly gave us free tickets for this trip, but as ever, we review any experience on The Motherload® as truthfully as possible in keeping with our ethos.