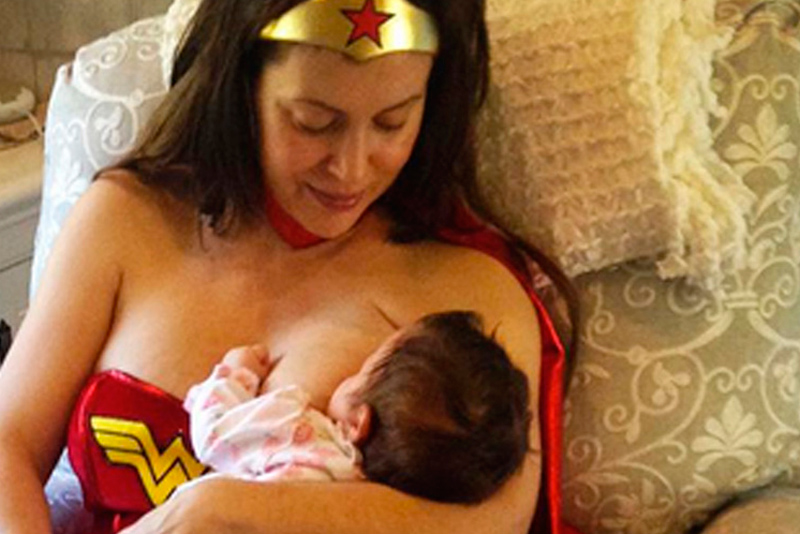 Way back when I was a rookie mum, about three years ago, I saw Actual Wonder Woman on the bus (W7 to Finsbury Park if you’re into that sort of thing).

I couldn’t see for sure whether she had stars on her pants, or a really, really uncomfortable bustier top beneath her baggy t-shirt but she looked like Wonder Woman to me; she was breastfeeding on the bus.

And she was not tucked away, or huddled in a corner with a shroud draped over her baby, she was doing it standing up. While the bus was moving. And then she rang the bell, moved towards the door, and whilst chatting to her friend, she got off the bus – without breaking off the feed once.

Her newborn was curled in her arm oblivious to the fact that he or she was supping from the very breast of ACTUAL Wonder Woman (okay. the bustier is unlikely, I admit. Grey nursing bra is infinitely more probable).

I sat there with my four month old asleep in his push-chair, my mouth agape at this vision of motherhood. I probably should have offered my seat so she didn’t have to stand and sway with her boob out, and a very small human attached to it, but I was just so bloody impressed by Actual Wonder Woman’s mum-skills that I didn’t even think to offer until just now. Three years too late. Sorry about that.

I was in awe because my experience of breastfeeding had not been the anytime, anyplace, anywhere approach: it had been very much at home, sitting on a towel, with muslins draped strategically over everything I was wearing, the baby in a large bib, also draped in muslins.

Generally the feed would be followed by a flood of milk-barf, both of us getting changed, sticking another load of washing on and then offering another feed to the boy with the belly which surely must be empty.

Suffice to say, I had A LOT of breast-milk. Well done to my boobs. It was bloody exhausting making all that milk (main components: cake and tea) and it was bloody frustrating being vommed on every day. And it lasted for a whole year. So as you can see, popping my breast out for a quick feed on the bus would not have been a wise move. And let’s be honest, you have to carry enough shit around without an entire change of clothes for yourself as well.

Now I’m a pro-mum (all you have to do is have a second baby), I’ve had plenty of opportunities for freestyle feeding, as my second baby does not waste a drop. But it wasn’t until 11 months in that I had my own ‘boobs out on the bus’ experience.

I’d come home from work early to take over from my husband who had been looking after our poorly daughter: we did the handover at Finsbury Park station and I hopped on the bus (W3 if you’re into that sort of thing). The baby in my arms was clearly feeling very sad. So I sat down on the bus and fed her and it made her happy again and she snuggled into my skin, the comfort and nourishment soothed her instantly.

But she did not want to stop the feed when we had to get off. So, off we got, baby not still latched on, but crying on my shoulder and so we sat down on a wall behind the bus stop  and continued the feed. And then my sad, poorly daughter slept.

I am perfectly comfortable feeding in public, I do not cover my breast or shroud my baby because I actually find it helpful to see that she is still alive/happy/feeding but I am always aware of the fact that for some reason, some people feel very uncomfortable seeing babies drink milk in the way they have since human life began. So I’m always on alert in case someone wants to tell me off for not being discrete enough.

Of course, nobody told me off. And nobody looked at me, awe-struck either. They looked kind of quizzical and curious, so I just gave them all my best Mary Magdalene smile. Then I realised I had crossed the invisible threshold of Acceptable Breastfeeding.

Breastfeeding an infant = acceptable (in fact better than that, really good!) Breastfeeding a 6 month old = acceptable (but you’re winding down as soon as they can hold a breadstick, right?). Breastfeeding a nearly one year old who is gigantic and could pass for 18 months = weird. (That baby has four teeth. Can’t you give it a steak or something?)

Soon, the “Wow! You’re still breastfeeding” comments will turn into “Why are you still breastfeeding?” and “When are you going to stop?” So, I have decided to take a leaf out of Actual Wonder Woman’s book because whilst standing up on a moving bus, and breastfeeding is very impressive, it was her cool, nonchalant attitude that I liked.

So I laid my poorly, sleeping baby back in her pushchair, clicked my nursing bra clasps back together, and as the lorries and buses whooshed by, I mentally hoiked up my imaginary starry pants.

Because as far as our babies are concerned, we are all Actual Wonder Woman.