Why All Couples Need A Safe Word – In The Delivery Suite

Safe words. Once the preserve of purveyors of a certain kind of kinky bedroom gymnastics, since EL James and Christian Grey spanked their way onto the bestsellers list, they are most definitely a mainstream concern.

Slightly sozzled conversations between old friends might reveal what their “safe word” is and what cheeky situation prompted them to use it last.  They’ve been discussed on breakfast telly, and mused over by academics and psychologists alike.

For the uninitiated, the “safe word” is a mutually agreed term between partners that says, “I’m uncomfortable, this is going too far, please can we stop now?”  It’s not a negative thing, but an empowering one, that enables couples to push their experiences to the limits without compromising either participant’s enjoyment.

But in my experience, they are a hugely valuable tool outside the bedroom too.  Our go-to phrase pre-baby was “I wonder how the cats are?” which we’d throw out to the other one if we were caught at an awkward party or uncomfortable at an overbearing family event.  And we did throw it out!  It was out Get Out Of Jail Free card, and it worked wonders.  Never offending a host with a sly look or having to excuse ourselves for a private conversation, it enabled us to make a speedy but polite exit whenever we needed to.

So I kicked myself when me and my husband found ourselves in exactly that awkward, uncomfortable situation during the birth of my first son…and we hadn’t agreed a safe word.

The first warning sign was when the midwife insisted that as I was being induced I’d definitely need an epidural and forced a cannula into my hand without consent; the second was when she assumed I’d struggle with her forcibly breaking my waters and tried to force gas and air on me (I was fine, actually); the third, fourth, and fifth quickly followed as she finally bullied me into an epidural, she then spent the entire time staring at the monitors, and barely spoke to me or my husband.

It somehow turned out we’d somehow ended up in a room with possibly the only living midwife who was deeply unsupportive of active labour or anything that didn’t involve me lying down on my back and keeping quiet.  I watched, helpless, as all my Hypnobirthing breathing techniques and plans for a calm waterbirth flew out of the window, wafted out by the midwife from hell.

Her notes in my file were laughable: “mother distressed by loss of heartbeat: reassurance given”.  Reading over them a few months later, we were completely baffled.  Had she really thought saying “don’t worry” with a dead-eyed expression whilst reaching for the panic button would really offer us any reassurance at all?

So why didn’t we do anything to change the situation?  After all, I’d been told by a friend that it was possible to request another midwife, so I knew it was possible, as did my husband.

But, in the moment, with her sat right next to me, glued to the monitor, there was no way of getting a message to my husband that I was deeply uncomfortable and wanted a way out.  Similarly, he was paralysed by his total lack of trust for this woman.  He wanted to go and get help but couldn’t bear to leave me alone in the room with her, particularly as she had resorted to asking him to press the panic button on the multiple times she decided we needed it.

I’ve written about my disastrous birth before, so I’ll spare you the details, but after the 3 day induction had run it’s course, and I’d pushed fruitlessly for 2 and a half hours, we ended up in theatre.  My son was yanked out on the second tug of the forceps and I was left with a horrific third degree tear that took six months to heal.  I haemorrhaged and needed a blood transfusion, and that’s before we get to what happened to my tiny new human who had breathing problems and various other issues.

Afterwards, we chewed over the situation time and time again.  Was the midwife right to be totally dismissive of all our birth plans?  If I hadn’t got stuck on my back, would my son still have got struggled to make his way out?  What could we have done differently?

And after multiple debriefs at the hospital I can’t help but conclude that if we’d had a safe word, if we’d had that Get Out Of Jail Free card to hand, things might not have gone quite so seriously wrong.  We would have been able to wrest some feeling of control from the jaws of impending doom.  And it’s that feeling of control that is so vital.

The Birth Trauma Association report that the feeling of a loss of control is a major factor in the development of PTSD and other post-birth trauma issues, so having a safe word could really change your experience of birth, and hopefully avoid the kind of horrific flashbacks myself and my partner experienced after the birth of our son.

So, ladies, it’s time to talk – sober – to your pregnant friends about what their safe word might be.  Because it might just save them from PTSD, or worse. 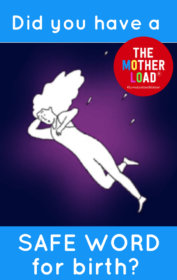