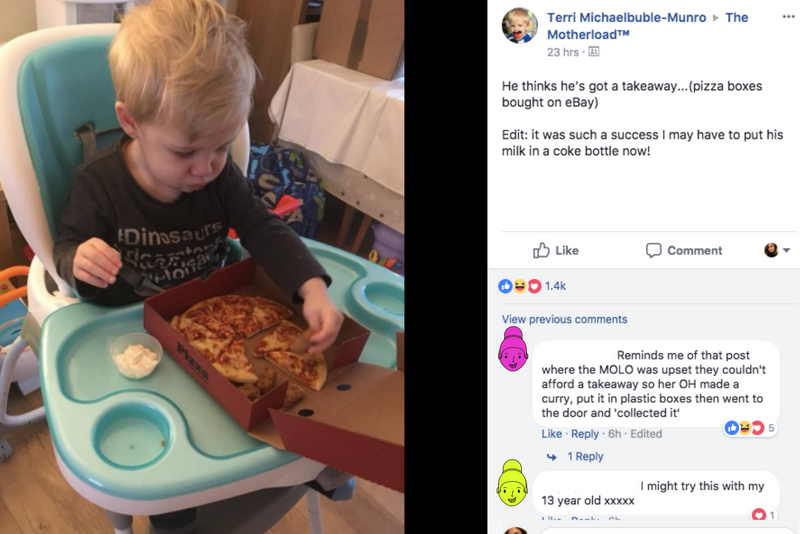 Ask any parent which time of day they find the most stressful and I bet mealtimes are way up there. Trying to persuade a child that they need to eat the meal you have lovingly prepared for them can feel utterly impossible at times. No amount of cajoling, tempting, or bribery will get a single morsel past their lips.  If this sounds familiar, why not try the Toddler Takeaway trick?

Terri Munro from Harlow in Essex had us mentally high-fiving her for her ingenuity when we saw this picture of her 22 month old son George tucking into his takeaway pizza like a big boy unaware that his mum had put his dinner in a cardboard delivery box she’d bought online!  She posted in The Motherload® Facebook Group:

He thinks he’s got a takeaway! (pizza boxes bought on eBay)

It was such a success I may have to put his milk in a coke bottle now!

The MOLOs loved the idea and Terri rapidly racked up 1.4k likes and hundreds of comments for her funny parenting hack:

Katherine said: Genius! I’m going to try similar with the plastic tubs from the Chinese takeaway!

Harrobed went even further: Why have I never thought of this before?! You deserve a gold star!!

Jenna commented: Surely this post has won the internet today?

Becky said: I’m buying some next week, might help with my son, brilliant idea

We asked Terri how she came up with the idea and she told us “George has seen his auntie eating ‘pizza in a box’ and got excited! So I thought a healthier and cheaper way would be to buy or make the pizza and stick it in a pizza box and it works a treat! We plan on using carrot sticks in the fries box, making healthier food fun to eat. At the end of the day, getting George to eat sometimes is hard work, so anything we can try that makes that process easier is worth a try!”

Like this? Share it and save the sanity of another parent who is going crackers because their child won’t eat!

UPDATE: The Toddler Takeaway has really taken off! It’s now been covered by The Mirror, Huffpost UK, Mailonline, The Sun, the Birmingham Mail and the Liverpool Echo – great work Terri making teatimes all over the UK a bit less stressful!

For more amazing MOLO parenting hacks, read about The Ten Dummy Trick and The Hug Button. And for the latest, head to ourhomepage.