10 Ways To Keep Your Toddler Entertained During Lockdown
The Motherload Book Club: The Two Lives of Lydia Bird
Keeping On Top Of Covid-19 Anxiety 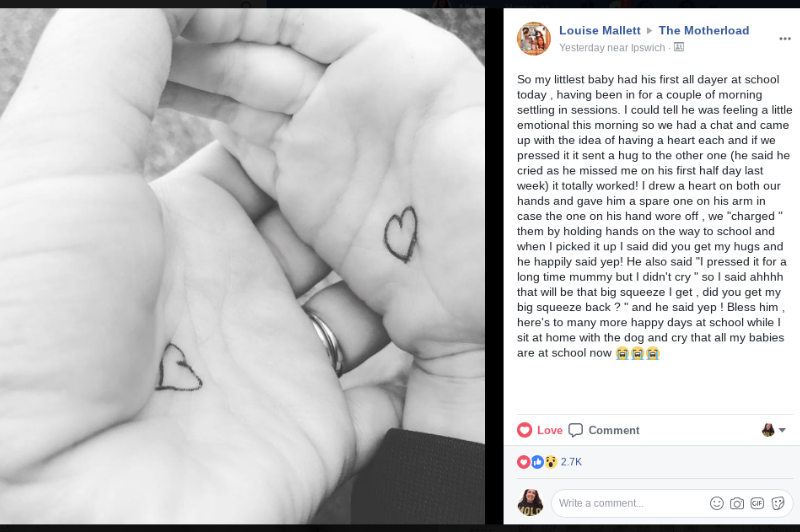 We just had to share this utterly gorgeous post from MOLO Louise Mallet in The Motherload®’s fantastic Facebook community. It’s such a simple and beautiful idea which will help any children (and mums) who are struggling with starting school. All you need is a biro and two hands to create your very own hug button…

“So, my littlest baby had his first all-dayer at school today, having been in for a couple of morning settling in sessions. I could tell he was feeling a little emotional this morning so we had a chat and came up with the idea of having a heart each and if we pressed it, it sent a hug to the other one (he said he cried as he missed me on his first half day last week) it totally worked! I drew a heart on both our hands and gave him a spare one on his arm in case the one on his hand wore off , we “charged ” them by holding hands on the way to school and when I picked him up I said did you get my hugs and he happily said yep! He also said “I pressed it for a long time mummy but I didn’t cry ” so I said ahhhh that will be that big squeeze I got , did you get my big squeeze back ? ” and he said yep! Bless him, here’s to many more happy days at school while I sit at home with the dog and cry that all my babies are at school now…”

The post got a huge response with thousands of MOLOs liking it (quite a few crying with the emotion of it all as well), and hundreds of comments including this lovely one from Katherine:

Sophie said “this is just the cutest thing ever!” and Jenny said “So lovely! Will definitely be using this!” And Alison summed up the pain that so many mums are feeling as little by little, they let their babies go:

“Tears in my eyes reading this. So sweet. I’m totally stealing the idea!! My daughter starts her pre-school for two mornings a week. Her first settling in day is next Monday. We have been together every day since day one. It’s a hard decision to let her go but I know she needs to socialise and meet other children/staff in preparation for nursery in January. I’ll be sobbing my heart out with a G&T”

Other MOLOs are already using Louise’s brilliant idea – Stephanie posted photos of her daughter with her ‘hug button’ today, saying

“Thank you to the lady who posted about the “magic hug button”. I’ve done it this morning on both my girls, more for the younger one’s benefit as the realisation of nursery all day is setting in and she had to be left screaming yesterday. So far she is really excited to show her nursery teachers!”

So if your little one is finding it tough settling in at school or preschool, maybe a hug button could help? All you need is one biro, two hands and a lot of love – and just don’t forget to hold hands to charge them up…

Update: Since Louise shared her gorgeous post with The Motherload® and we shared it with you, this post has gone viral! Thousands of parents have read and shared this article and it’s been covered by the media here – here’s the article in Mail Online, The Sun Metro and Huff Post and it’s even been reported in the United States on the HuffPost US Disney’s Babble, Good Housekeeping US and on Scary Mommy and Louise’s hug button has even made it as far as New Zealand, Belgium, Brazil, Germany and Australia and Asia. Amazing! We are so thrilled that Louise’s brilliant, simple idea is reaching so many parents and children.

Like this? Share it and spread the MOLO love! If you have a little one starting school you need these amazing Parenting Hacks and for the latest from The Motherload® head to our homepage

We use cookies to ensure that we give you the best experience on our website. If you continue to use this site we will assume that you are happy with it.OkRead more