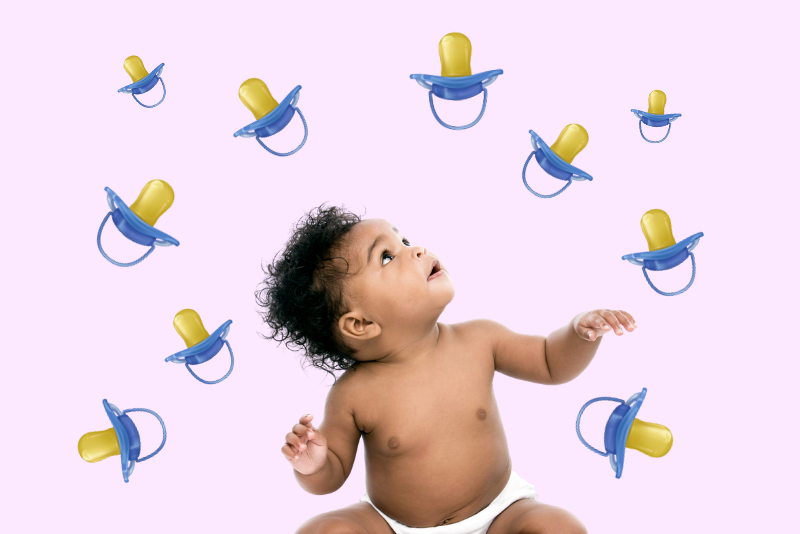 Well, we love a good parenting trick at The Motherload®, so we just had to share this genius-level hack from our amazing Facebook community, posted by MOLO Laura Gerson, from Canvey in Essex, whose daughter had kept waking up at night because her dummy had fallen out. She puts her to bed with – wait for it – TEN dummies. So when 11 month old Amelia wakes at night, she doesn’t have to go far to find another pacifier and settle back down to sleep giving mum Laura some more precious zeds.

WHY DIDN’T WE THINK OF THIS??

Laura posted: Weird bedtime routine that’s worked… Lol, Since my little one was about 3 months old she’s gone to bed with roughly 10 dummies in with her. Found that when she cried of a night all she wanted was a dummy then she’d go back off. Realised that if she had one to hand then she would just find it of a night, trial and error with her losing a few down the side but 99% of the time she feels around, finds a dummy, sticks it in and she’s sorted! Haven’t had to go into her of a night for about 8 months now… WINNING!! I don’t even wanna think about the time when the “Dummy Fairy” comes to take them away though.

The post got over a thousand reactions from fellow members of The Motherload® and a lot of praise for Laura’s brilliantly simple idea. Some clever mums had already done the same and other sleep-deprived MOLOs could not wait to try it out for themselves.

Danielle: That’s genius!! Why oh why didnt I think about that when my little girl was tiny

Kelly: I do this too 3 up each end of the cot plus one in her mouth and one attached to a comforter

Salina: We did this! You can buy glow in the dark ones- we got loads!!!

Michelle: This is amazing! Wish I had thought of this when mine was younger!

Rosie: This will be me tonight! Sleep training has started…. wish me luck!

UPDATE 4/1/18: Wow – since we first shared this, Laura’s brilliant hack has gone viral appearing on six continents! It’s been published all over the UK by The Mirror, The Sun, MailOnline, HuffPost, the Daily Record and a whole load of regional and local media and her brilliant tip has even travelled as far afield as Vietnam, France, Hong Kong, Malaysia, Sweden, Australia, India, Belgium, The Netherlands, Chile, South Africa and appeared in the US on Babble and PopSugar

We caught up with Laura to find out how she was coping with all the craziness, she told us “I think it’s madness! I originally put the photo up because it looked cute and we found it quite humorous. I had absolutely no idea how mad it would go! Especially worldwide! I know lots of people do and have done this but the way I see it, is that if someone hasn’t thought to do this and it works, then that’s fantastic!”

UPDATE: 10/1/18: Just when we thought this couldn’t get any bigger, BBC Look East asked to interview Laura and the gorgeous video of her and Amelia became the most watched video on the BBC website – with a little MOLO power! We were #2 to Donald Trump all morning but managed to push into the top spot by lunchtime thanks to our members watching and sharing the video everywhere. INCREDIBLE! Then we made it to the BBC homepage. Phew! You can watch the video here!

Fingers crossed the Ten Dummy Trick is having the same effect for other parents as it did for Laura!

Like this? Share it and save the sanity of a sleep deprived parent who is getting up every five minutes on a dummy hunt!

For another amazing MOLO parenting hack, read about The Hug Button. And for the latest, head to our homepage.