My Life in IKEA 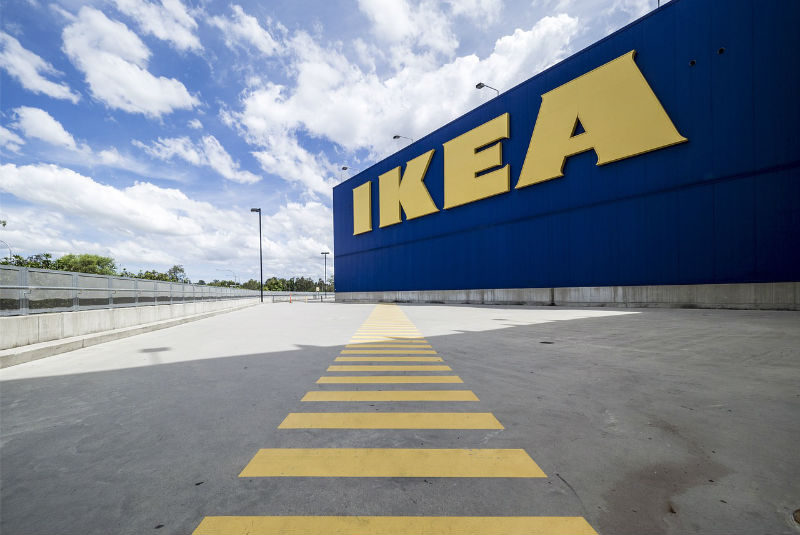 When I think back over the years, I can pinpoint the different stages of my life based on time spent in IKEA stores, both working and shopping.

As a cash-strapped student, I thought I had hit the jackpot when I landed a job at IKEA in Bristol. I wandered out of the temp agency, daydreaming about evenings spent plumping cushions on display sofas and putting bundles of big twigs in giant vases. The reality of the job involved significantly less interior design know-how and rather more pulling pallets and heaving heavy boxes in the warehouse. Dinner in the staff canteen for a quid was a bonus though and much of the late shift was spent sitting on a pile of mattresses, chatting to colleagues and attempting to avoid any contact with the customers. Well, it is supposed to be self-service.

I do remember enviously eyeing up the smug couples choosing those first shared purchases to feather their love-nest. Of course I became one of them all too soon, only by then I was really wandering round wishing I was in Habitat and hoping this was all a temporary measure to make do until a wedding list in John Lewis. Then time marches on again and before I knew it, I had the mortgage and the marriage and the posh white plates so the sturdy navy blue IKEA set has been relegated to the back of the cupboard to bring out for barbecues.

IKEA has proved to be useful in Europe to break up long motorway journeys when you see the sign and know it’s a chance for free wifi and a wee. I did have an unfortunate incident at a branch in Germany, where we lived for a while. It happened just beyond the hot dog carts which are far superior over there with mustard, gherkin slices and crispy onions to help yourself to. I threw a not-quite empty can of pop and ketchup-covered cardboard into a bin only to scurry away at speed when a fellow shopper let out a horrified gasp; it wasn’t in fact a fixture in the foyer but the brand new bin she had just bought.

After moving in with your other half, the next phase of the IKEA relationship comes with parenthood. Before the baby arrived, we felt compelled to stock up on the essentials that everybody raves about including the Antilop highchair, the one they often have in coffee shops. It’s no wonder the basic plastic model is so popular when it costs a little over a tenner, is light to manoeuvre even with a child buckled in and so mercifully easy to wipe down or even hose down in extremis. What’s not to love?

We had another outing to IKEA with our toddler in tow. This time the aim was to come home fully prepared for potty training with that special seat to put on the loo and the little plastic step for reaching the sink. You have to hand it to them, they know how to make a shopping experience properly family-friendly. You pull into a parents’ parking space right next to an outdoor playground to let off steam then it’s up the escalator to find an entrance to the toilets and café in case you’re already ready for a pit-stop to relieve and refuel. The IKEA Family card even gets you free tea and coffee on weekdays.

The kids furniture department proved to be excellent entertainment for our two year old who enjoyed a Goldilocks-inspired game of gathering up all the teddybears then taking turns to climb into every little bed, pull up the covers and lie down with her eyes closed while declaring aloud to anyone who would listen that she was “fast abeep”. We had to steer her skilfully through the Marketplace area where she would have had a field day in a treasure trove of smashable stuff, like a calf in a china shop.

Our last trip to IKEA was our first as a family of four and as ever they had it all sussed. Breastfeeding is welcome anywhere in their stores, not just the dedicated rooms. In the café, there are microwaves and little play areas and all the colourful plastic kids cutlery and plates that decorate our draining board at home. The baby’s lunch was on the house with a free Annabel Karmel pouch.

We had the meatballs of course because it’s kind of an unwritten rule when buying flat-pack furniture that you will eat meatballs with gravy and jam. My friend says a visit to IKEA is the ultimate test for a relationship and the key to surviving the ordeal without a row is to never let your husband get hangry. Meatballs could save your marriage.

I am starting to crave my next IKEA fix. We haven’t been for a year because we live too far away and my other half doesn’t think it’s a proper day out. I just don’t know how much longer I can live without some Kallax in my life. Everyone else has them; you know the cube units with square holes for sticking storage boxes in. Voila, the toys all over the floor can be tidied away, almost out of sight.

The lure of free childcare is enough to excite me anyway; a whole 45 minutes of shopping time with only the little one in the trolley while her big sister, now she’s over 3, can run around the supervised soft play on her own.

Back when I was a student, I had briefly wondered if the crèche would be a more fun, rewarding part of the store to work in. One evening, an exhausted and disgusted looking colleague stormed into the canteen with the news that they had just performed a deep clean routine after “some little shit did a big shit in the ball pit”. Maybe getting bored and covered in dust in a draughty warehouse wasn’t so bad after all.

Like this? You’ll love Jill’s blog The Truth About Buying Second-hand or you can read all of Jill’s MOLO blogs here