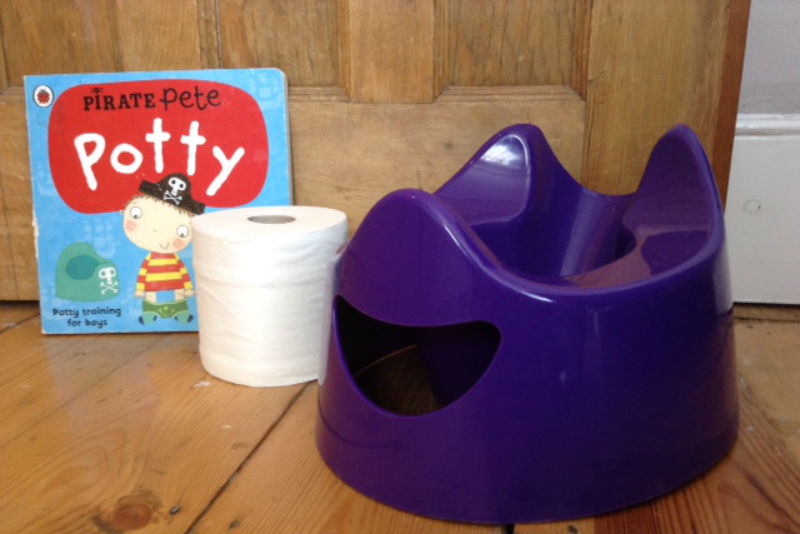 Potty training was one of the parenting milestones I was least looking forward too. Don’t get me wrong – my toddler no longer being in nappies was a huge deal and one I was definitely keen to make happen. But the actual process of potty training? Ugh! My son potty trained in three days, so based on my HUGE sample size (one), I feel more than qualified to impart my superior knowledge on how to potty train. (Or maybe I just asked the MOLOs for help too!)

Start by waiting. Just wait until they’re ready. Everyone agrees on this one. If you try and force it before they are ready, you are doomed to failure. Don’t worry if this doesn’t happen on the timeline everyone else thinks it should. They all get there when they’re ready and all children are different.

Show them pants. We bought my son underpants when he started showing signs of being ready. We explained what they were for and that he would soon stop wearing nappies and wear pants instead, but only when he told us he wanted to. He was resistant at first, and so we set up an underpants drawer in his bedside table and took him some pants into his nursery so they could also talk to him about them. On a related note, I’d recommend going straight to pants. Pull ups just seem to confuse the issue.

We also read Pirate Pete’s Potty book to him. Also available as Princess Polly.  There’s a button to press, and it gives a cheer.  Another book we found useful was ‘It’s Potty Time‘.  This is the book my husband would (and does) recommend.

Buy some potties. Actually, decide whether you want to use a potty or go straight to them using the toilet. There is no right or wrong on this one – just do what works for you.  You can get some fab smaller toilet seats from hardware stores these days that fit on top of your normal toilet seat.  If you do decide to use potties (we did, although we actually did a mix of both), buy a couple so you have them handy. Don’t worry about spending a fortune on ones that flush, or are swanky. Hopefully, they’ll only be using them for a short time. We purchased some basic plain cream ones and then spent a few happy hours with the toddler decorating them with stickers. That meant he was used to the potty and felt they were ‘his’ before we broached the idea of him using it.

Let them see you using the toilet.  That way, they know they aren’t being asked to do something that no-one else does.  Also get them used to the toilet flush. It’s actually quite noisy when you’re small and can be frightening if you aren’t used to it.

For boys – have a think about whether you want to go straight to standing up or start by sitting down. Most of our MOLO’s recommend starting standing up, but we did a mix of both.

On the day he announced he would like to wear pants (which fortunately was a Saturday), we quickly changed plans and made sure we would stay in for the next couple of days.  It’s easier and much less stressful being at home and having an accident than being out.

We had a sticker chart ready for when he wanted to start, and gave a sticker for each successful trip to the toilet/potty, 2 stickers for a poo.  We never took stickers away for accidents and used positive reinforcement. Lot’s of ‘Never mind’ and ‘oh dear’ for accidents.  Other suggestions are marbles in a jar or a chocolate button for a successful trip.  Our sticker chart was a race track, so once he’d reached the ‘finish line’, there was a present waiting for him.

For boys, this bit is a little easier – it’s not as difficult to find places for a little boy to have a wee. Another suggestion is to take an empty plastic bottle out for absolute emergencies (don’t forget the lid!).  For girls, it’s a little harder.  Try to stick to places where you know there will be toilets you can get to quickly for the first few outings.  Some people recommend the Potette which is essentially a portable potty for you to fold up and take out with you.

Expect some accidents. It’s okay, and completely normal for them to have a few accidents.  You would typically expect the frequency of accidents to decrease over a couple of days, so if it doesn’t maybe have a think about whether or not they are ready – if not, wait a bit longer.  If they are definitely ready, then persevere.  Try not to go back to nappies, except for sleep times as this can cause confusion.

Unfortunately (or not!), there’s no magic solution for night time dryness.  Being dry at night is a hormonal development that is beyond anyone’s control.  Wait until you’ve had 3 or 4 consecutive days of a dry nappy in a morning, and then go for it!  This hormonal development is often later for boys than girls, so try not to worry if it’s not happening when you expect.

A great suggestion I read from a MOLO (which actually also works when they’re sick too), is to layer a few sheets with the ‘Dry nites’ pads in between. That way, if they do have an accident in the night, you can just remove the top layer and don’t need to remake the bed at silly o’clock. Genius!

GOOD LUCK – and here’s to freedom from poopy bums!

Love this? Share it, and spread the MOLO love! You can also read Potty Training Disasters: Baby Ate Poo, and for the latest from The Motherload®, head to our homepage