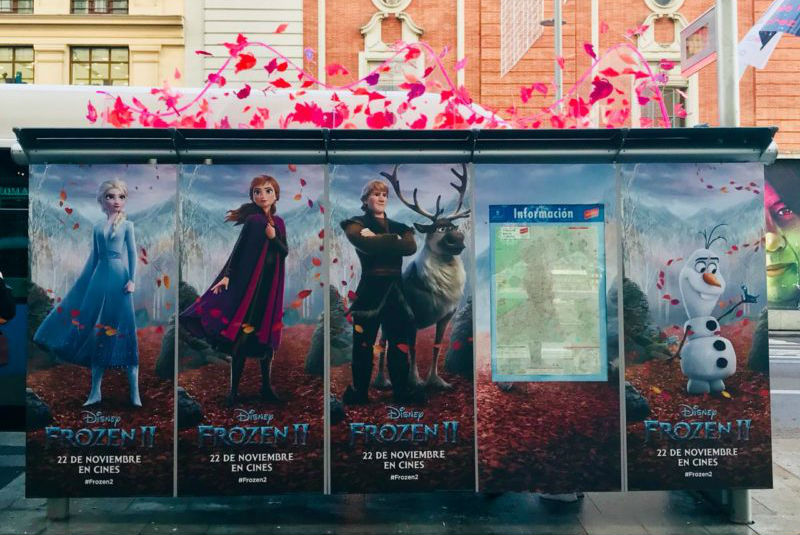 I am a huge Disney fan and naturally I was excited for the latest film from Disney. The weekend that Disney’s Frozen 2 was released to cinemas (almost) worldwide, I was in Madrid with my children. We had just spotted the most fantastic Frozen 2 bus stop and so I stopped to take a photo. They were furious. They were furious because I had neglected to tell them that there was a new Frozen film coming out. So I, being the over sharer that I am, sent the photo to family and friends. I followed it up with a message “the kids are annoyed with me!”.

I soon received a flurry of messages all along the lines of “I bet they are! We’re seeing it this afternoon, we just can’t wait any longer!” or “We wanted it to see it with you guys, such a shame you’re not here!“. Except for one, one message that popped up like an unwanted dinner guest: Haha, we’ll I’m not surprised, they are BOYS after all! I was going to ask you to come with us but didn’t want you to waste your money. So we’re going with some other friends who have daughters instead!

Yes, my children are boys! I was just as shocked as you probably are now to discover this fact. While they were furious that I had neglected to tell them about the latest Frozen 2 film, I was shocked/angry/hurt (delete as appropriate) to discover they had neglected to tell me that they both have male genitalia. Clearly, I could no longer be excited to take them see Frozen 2 because everybody knows that Disney is only for GIRLS!

I sat them both down for ‘The Talk’ to explain that Disney films, specifically Disney princess films, are only for girls. My 6 year old insists he only loves Elsa for her magical ability and my 5 year old promised me he would only look at Olaf or Sven, but was I willing to take the risk?

Of course I was.

While we might live in a pink or blue world that is not our reality. It is bizarre to me that parents would prevent their child from going to the cinema because of their perceived gender. I’ve seen a few articles encouraging parents to take their boys to see Frozen 2. Exposing them to Kristoff singing about his feelings could be a small effort to combat the culture of toxic masculinity.

However, this idea isn’t limited to Disney. It applies to books, toys, hobbies. Parents of older boys have confessed that their children often hide what they really enjoy for fear of being mocked. Even I am guilty of planting that seed of doubt when encouraging Mr. 5 to leave his toy babies at home. We live in a time where we want to let boys enjoy the same things that girls do. Nobody bats an eyelid when a girl does something considered ‘boy-ish’. However, as parents we also want to protect our boys from being mocked or picked on because they dare to be different. It’s a dilemma that allows the cycle to continue.

So, what’s the solution? Take your sons to see Frozen 2, let them experience a little magic. My boys won’t have the memory of being the only boys in the cinema, or the confused face of the man in the ticket office. They will remember the moment we sang ‘Into the Unknown’  and it started hailing. Which, for anybody who is familiar with Marrakesh will know, was a breathtakingly magical experience.