Why Cloth Nappies Are The Least Gross Part of Motherhood 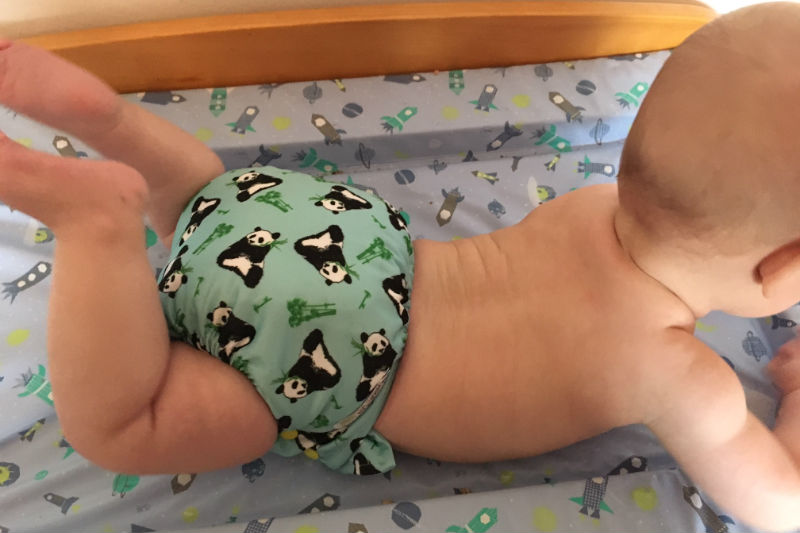 Not that long ago, I switched to using cloth nappies on my son. And, as with all things parenting, a lot of people had a view on it. So far, so standard. But what was amazing was that for once, all those people seemed to have one single view. And that view was “eww, gross!”

And yet I don’t find cloth nappies all that gross at all. Sure, dealing with an item covered in someone else’s faeces is never going to be my favourite thing to do, but it turns out that motherhood has changed my reference point for “gross” so dramatically that it actually barely registers on the scale.

Because even before I actually had my son, things were getting gross. I was blessed with horrendous morning sickness – the kind so violent that the sheer force of it gives you a nosebleed that you have to somehow deal with while simultaneously being sick into a bag as you sit on the front wall of a house you moved into the previous week (hey, new neighbours!). And once you’ve vomited yoghurt out of your nose and into the gutter, you really have very little dignity left. That’s before you even get to the random beard hairs and the giant puffy Michelin hands and the incredible heat that turns you into a great big sweating human furnace.

I hear some people love pregnancy. I was not one of them.

I also heard a lot about how gross birth was, but my son decided he wasn’t a fan of contractions and so one emergency c-section later I found myself saved from the worst of it. I was even spared the horror of the dreaded meconium nappies, because I couldn’t stand up and was so off my face on Oramorph that all I could say in response to my husband’s traumatised face was “marmite!” But I was still right there with the rest of new mum grimness. The waking up in the night drenched in sweat. The waking up in the night drenched in milk. The not waking up in the night at all because you’ve not actually got any sleep yet because your baby keeps throwing every feed straight back up onto you. I’m ashamed to say that on more than one occasion I witnessed my son throw up all over my bed, and promptly just shuffled over to the other side (my husband having retreated to the safety of the spare room) and tried to sleep.

And oh, the throwing up. So much throwing up. In his seven months on this Earth, my son has been sick in many different and imaginative places. On the cat. In a lady’s hood in a cafe. Into his bowl, which wouldn’t be so bad if he hadn’t then tried to eat it again. In my hair. Down my top. In my mouth. In his father’s beard. In the bath. On the other cat. And then there was the mystery vomit, where I heard the tell-tale splat of milk hitting floor but never found any evidence that such a thing had occurred. I can only assume that one of the cats ate it.

Where the cats haven’t been able to help with the clear up though, is the dreaded poonami. Which brings us back to the whole reason I switched to cloth nappies in the first place; the absolute horror of the escaping baby poo. For my son has an atomic arse which no disposable nappy can contain. Trust me on this. I tried them all. And all that happened every time he did a crap was that his clothes ended up soaking in our mop bucket – charmingly renamed his “bucket of grim” – while I despaired of ever being able to leave the house without his full wardrobe as back up.

Then a friend suggested cloth. The elastic, she claimed, would be able to withstand the violent force of even the most Krakatoa-esque explosion. And after my son went through three outfits during the course of one trip to baby cinema, I decided to test her theory. After all, things couldn’t possibly get any more disgusting.

And, miraculously, she was right. Since we switched to cloth I’ve not had the Bucket of Grim out once. Instead I’ve got a designated nappy bucket, which is lined with a mesh bag so I don’t even have to touch the contents once they’re in. And rather than peeling crap-covered clothes off a wriggling baby and hoping he doesn’t get his feet, hands and hair into it, I just remove a nappy and put it in said bucket. Never again will I find myself trapped in a park toilet faced with a poonami so severe that it takes eleven wet wipes to clean up. Yes, that’s correct – ELEVEN wet wipes to deal with a coating of crap that ran from shoulderblade to mid-calf. It truly was something to behold.

So when you’re used to being faced with that level of grimness, cloth nappies really don’t register on the gross scale. Now I just need to find a similarly handy solution for the vomit…

Like this? Share it, and spread the MOLO love! You might also enjoy The Things I’ve Learnt About Cloth Nappies, or for the latest from The Motherload®, head to our homepage