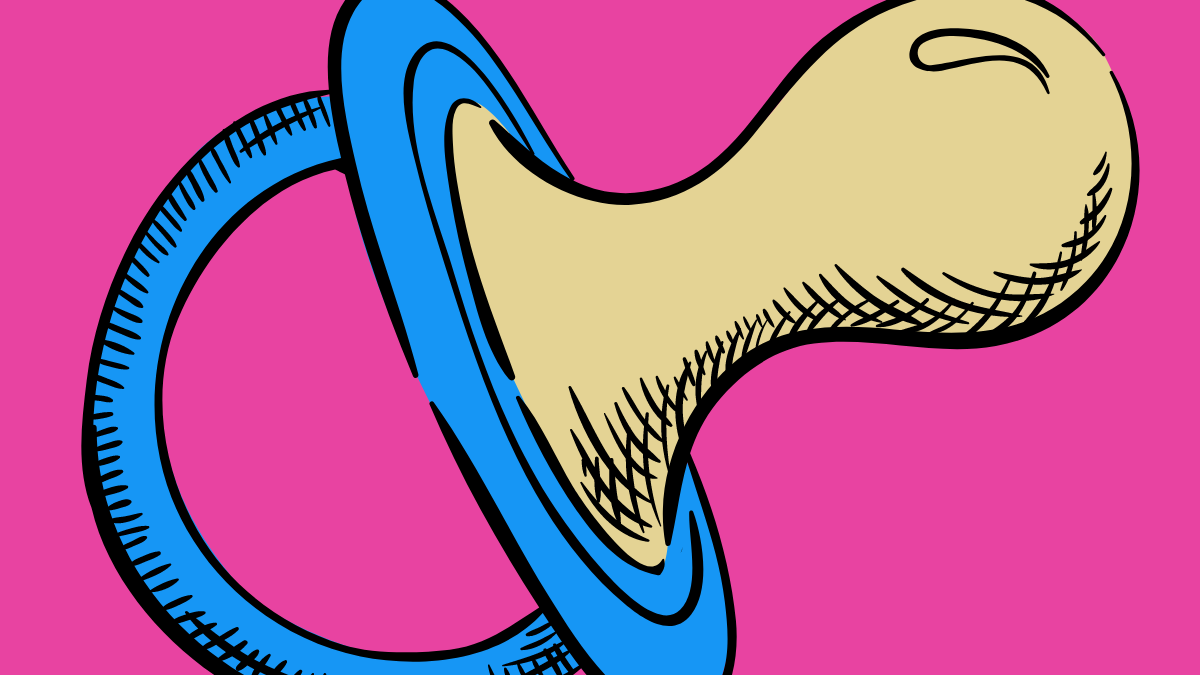 I admit, before I had kids, I kind of judged dummies.

Not vocally; I’m not an arsehole. But I didn’t like the look of them and I didn’t intend on using them. But then, my first baby was born and she was an actual real life baby who was screamy, refluxy and ‘needy’ as babies are, and suddenly the idea of a little contraption which could make the incessant, unpleasant noise cease, and stop her from torturing my poor nipples (albeit briefly) became an extremely attractive option.

They also help protect against SIDS, so I was informed, so after several days of non-stop feeding interspersed with a lot of high pitched wailing, I used this fact to persuade my similarly disposed husband that we NEEDED to use them.

She was an excellent dummy user. The glow in the dark dummy was the ultimate saviour and when, aged around 4 months she learned to put her own dummy back in it was bloody AMAZING. From there, she eventually learned to get herself back to sleep at night and around six or seven months, once she had stopped nightfeeds, she slept through the night for the first time with help from the magical dummy.

The “advice” is to get rid of the dummy, along with bottles, by a year.

I know precisely zero people who have managed to stick to this. They are ever so effective at combating toddler whinge in the buggy or car and especially useful if nap fighting has occurred which most toddlers are very practised in, and let’s face it, life is hard enough with a one year old. Pick your battles, right?

And thus, the big one still had her dummy for bedtime and naps. She was extremely attached to it, and I was a bit worried that she would have it forever, so scared was I at removing it and potentially f*cking up her good sleep, which had been a hard-won battle.

However as she approached her second birthday, we had the fortune that an opportunity presented itself in the form of croup (every cloud!), and she found that couldn’t breathe with a dummy in – so we kicked her when while she was down took them away (we were going to have a shit few nights anyway, might as well kill two birds with one sleep deprived stone) and never looked back.

The small one never really took to his dummy in the same way.

Just another example of something I thought would be easier this time around, no guilt, no worry – dummies packed in the hospital bag just in case… and he laughed (or more accurately, screamed) in my face. He didn’t take to any newborn dummies (I bought and tried them all) and it wasn’t until my wonderful problem-solving firstborn shoved hers in his gob while I was momentarily distracted that I found he would accept the 6m+ dummies. God knows what that says about my nipples.

Now, the dummies are about the only thing that keep him from 24-hour whinging (although if he’s committed, he will take it out in order to whine). And before the sanctimonious part of you wants to yell at me to give him a cuddle or bake cakes with him or sing to him instead, he whinges because he is tired, yet he will not sleep. He is a sleep div.

On the odd occasion that he has slept in past, let’s say 6am, he really is a lovely, cheeky little boy. This is however very rare, and for my own sanity I do give in to the dummy much more than I had ever really anticipated. Additionally he’s excellent at opening doors and using stools to get at things so quite often he just appears with a dummy in, and I don’t always have the heart to take them off of him after he’s displayed such marvellous skills of ingenuity and creativity.

But I have just realised that we are coming up to that time; he will be two in under four months, and that was my aim. He wouldn’t understand the concept of a present, or a dummy fairy or a dummy tree. It’s cold turkey, or nothing.

Unfortunately this time around we have the additional complications that a) the two share a room and a restless night for him means a restless night for her and in turn hell on earth for everyone and b) he is absolutely capable of getting out of bed, opening his door and standing at the top of the stairs and screaming. When we finally pluck up the courage and take the plunge, I fear we may be in for a long, fraught week.