How Do I Get My Child to Eat? 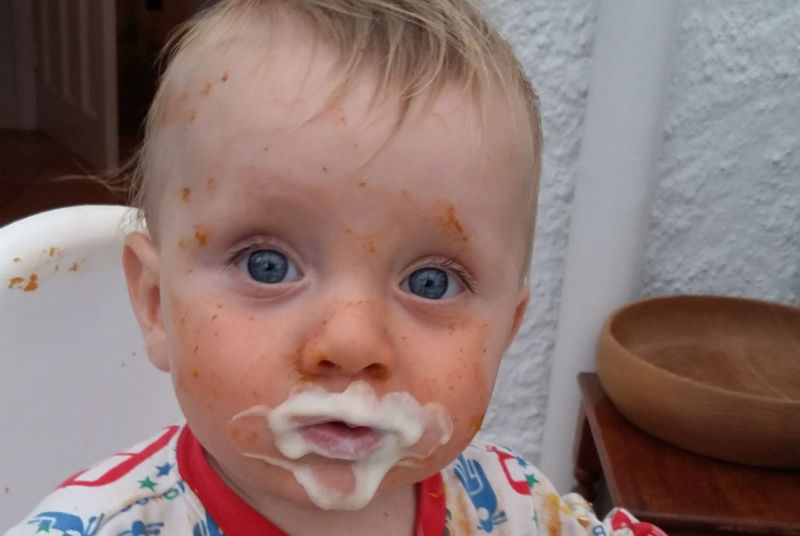 We all know that the distance a toddler can lob food across a room directly correlates with the amount of time and effort we’ve put in to creating the culinary masterpiece. There is nothing more frustrating than spending an entire afternoon making a fresh lasagne only for it to become an art installation on your kitchen wall.

When children won’t eat, it is extremely stressful, often both for the parent and the child. And we all want to ensure our children eat a good, nutritious diet – or at least just eat SOMETHING.

I am by no means an expert but over the years I have picked up a few tips and somehow got it sussed, for my own kids, anyway. Don’t get me wrong, I am not Judgey McJudge-Pants and if you fed your kid custard creams for breakfast, just remember that nobody saw you do it and therefore it doesn’t matter. There is a bamboozling amount of information out there, much of which is complicated, time-consuming to prepare and unrealistic. Let’s face it, who the heck has time to make savoury muffins (which they will turn their noses up at) and the money to buy all-organic?

So here are some tips, because in my experience, it’s not what they eat but how they eat it.

My first child was bottle fed for various reasons which are a whole other blog, and when it came to weaning, he enjoyed being spoon fed, like a baby bird…eventually. Those first few mouthfuls you offer a six-month old are often the most disappointing to you – and probably to them too (have you tasted baby rice? *shudder*). Their face is a picture of alarm, total confusion and repulsion, generally but don’t mistake this for dislike. And this is the first tip – hold your nerve, it takes time and patience for babies to ‘get’ what food is, let alone start enjoying it. A month later, and you can expect to still be chucking quite a lot in the bin, unless it has become clear that they actually only eat tiny amounts. I fed my little one pureed vegetables and all the things you’re supposed to, lovely little finger foods and gradually added dairy and meat until he was eating a wide range of foods. The walls needed repainting, but hey ho.

Fast forward a few months and my second child arrived. After an epic struggle, he was exclusively breastfed. When it came to weaning, I had learned about baby-led weaning but I needn’t have bothered reading about it, as my youngest showed me how it’s done by laying into a spare-rib like a tiny caveman as soon as he could grab it off a plate. And that was that – he tucked into whatever he could find on my plate, or his, or the floor, or whatever. Again, the main thing is to relax and let them take their time learning what food is and how to negotiate all these new things. You will get a lot of gagging, you will be scared, but they are surprisingly adept at working out how to eat safely all by themselves. Think ‘a year’ rather than ‘a week’.

Now they are older, my kids have a varied diet and they eat well, and this is what I have learned: The main thing to remember is that, just like adults, children need a relaxed and jovial environment in order for them to enjoy and digest their food. You have to genuinely not care how much or what they eat. Admittedly, most mealtimes are still a bit like a chimps’ tea party, but they do eat what’s available to them. I never push a spoon at them, force them to eat anything, never bribe with other foods. It’s very easy for the words, “Eat your carrots and you can have some pudding” to trip off the tongue, but all this does is demonise the main course. The main course IS the fun bit in our house. I avoid saying, “Just try it” – they suss that one right out and realise mummy wants them to eat it, and therefore it’s obviously something suspicious or boring. So, instead, I tell them they “don’t have to eat it”. ‘Pudding’ is always some fruit or yoghurt and they can have it regardless of what they’ve eaten for dinner – it isn’t a treat, it is part of their meal.

I often include ‘banker’ foods – things they love that I know they will eat as well as other, more ‘interesting’ (weird) foods. I put them on the table, or on their plates, and simply tell them what it is and crack on with eating my own. They might declare it ‘yucky’ and hurl it across the room (my youngest can get an item of food into a glass of water from approximately a mile away, he’s such a good shot!), but I hold my nerve. Ignore it, tell them ‘we don’t throw food’ and that ‘no food is yucky, it’s all yummy’.

With a heavy heart full of guilt, I went back to work full time when my first child was eight months old and the childminder basically fed him cake, despite my instructions. I was pressed for time and I often bought those squirty tubes of goop, and the little ready meals you can buy for toddlers to save time. Sometimes he ate them, sometimes he didn’t. When we were together as a family I mostly made fresh food and he enjoyed it, and sometimes he didn’t.

I try to keep their routine consistent, but it is hard when they’re in childcare and both you and they are exhausted from the day. They always have a ‘meal’ at the same time of day, even if they’ve had masses to eat already. I offer a few little bits after they’ve been at nursery, like sandwiches, tinned or ‘freezer food’, and they sometimes eat it – the main thing is that their routine stays the same for the days I can sit down and eat dinner with them, and I try to as often as possible.

It’s worth knowing that there’s no such thing as ‘toddler food’ – toddlers around the world enjoy all sorts of things; spice it up a little and always offer what you’re having rather than faffing about making separate meals, because who the heck has time for that anyway, and why should you eat pasta every night? Don’t worry if they don’t touch it, you’ve still given them the experience of new foods and if there’s a few breadsticks available then they can have them too, they won’t starve. My children have surprised me – the youngest can’t get enough of broccoli and chickpeas and the eldest goes mad for shellfish and curries.

Snacks: this is a bugbear of mine – I don’t need a hundred-weight of snacks all day and neither do the kids. My son’s default whinge is ‘I’m hungry’, but actually, this can be a code word for ‘bored’ or ‘tired’ or ‘thirsty’, so before giving him anything I run through a few of those options. They have a snack mid-morning because mornings are long when you get up at dawn, or before, but I steer clear of afternoon snacks as they eat dinner late afternoon and it ruins their appetite.  I also avoid sweet foods and drinks as much as possible, mostly because you have to peel my eldest from the ceiling when he has chocolate and he is very proud of his ‘sparkly teeth’. ‘No’ is a powerful word and very useful when pester-power is in full operation. And why the bejeezus are all children’s snacks placed at roughly the height of a two year old in shops and cafes?

I personally think it’s important to respect children’s appetites and their tastes as you would an adult – my eldest thinks eggs are the single most repugnant food known to man so, while I ignore the general bleating about how heinous they are, I don’t pile his plate up with them but I still offer them, or put a tiny bit on his plate. He doesn’t have to eat them, but sometimes, to my amazement, he actually does. Almost always, when a child says, “I am full up”, they are. So clear up, even if they have eaten precisely nowt. They all have phases when they’re lacking appetite and if they’re unwell or teething then all bets are off.

Be positive and set a good example

I don’t speak about food in a negative way (mostly because I really like food!), and if my kids say they don’t like something I just ask them why not. Here is my most important tip, and one that will serve you well too: try really hard to set a good example to your children. I have friends who loathe plain water but are frustrated that their children won’t drink anything but squash. If you want your children to eat well, eat well in front of your children yourself, show them that vegetables are delicious by scoffing them, and don’t diet – you will only teach your little ones to swerve food themselves. Try not to buy the stuff you’d rather they didn’t eat – if it’s not in the house and they don’t see you having it, they won’t want it. However, hiding in the airing cupboard to eat chocolate without sharing it is entirely acceptable, of course. And keep the wine on a high shelf.

It’s a minefield out there, but as I have tried to explain, keeping it simple and adjusting your attitude is so much more important than trying to be the Nigella Lawson of kids’ cookery.

I am a working mum of two high-octane boys who absolutely run rings round me. I am interested in art, feminism, politics, health, fitness and housing and currently work in the public sector. I have also been a writer for 17 years.