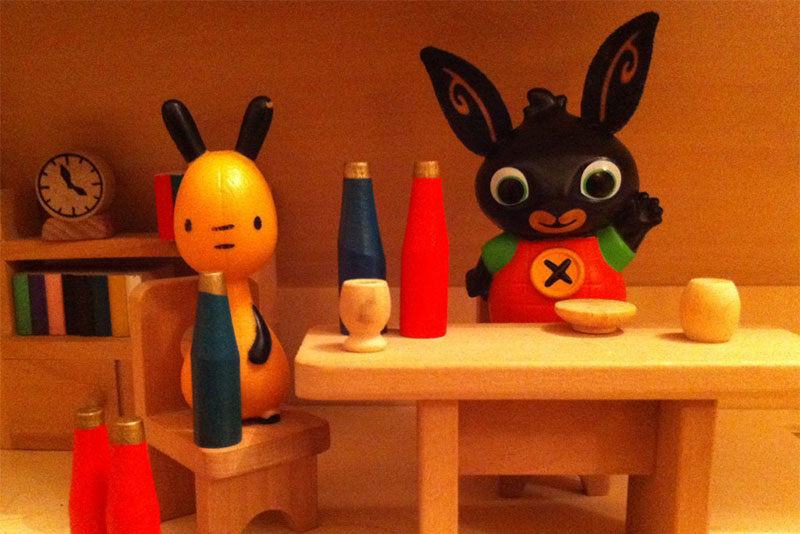 ‘Why don’t you turn of your TV set and go and do something less boring instead?’, asked the ‘Why Don’t You’ theme tune in my youth.

Sage advice to today’s toddlers. Sadly, though, there’s no way you’d ever get them to sit through a re-run of that beige try-hard show from the early 80s to hear it. Not this lot! The ‘on demand’ short attention span instant gratification generation – as I catchily refer to them – don’t know how lucky the are.

They’re not up at 6am, having to sit through rolling Teletext until it’s finally time for the early Sandi Toksvig and Neil Buchanan vehicle ‘No. 73’ to come on. Oh no! They’re happily binge-watching whatever they fancy, whenever they want to, from the age of about 6 months old. They will NEVER know a TV schedule. Never mind going through the festive Radio Times with a highlighter pen.

My 4 year old daughter freaks out if she has to sit through an ad break: “WHAT is THIS Daddy?! I don’t want THIS! Fast forward it!” The only advertising she has to endure are the unskippable YouTube ads before one of the bizarre adults-making-princess-accessories-with-Play-Doh videos she somehow manages to find. (Safe search on, fret ye not).

I’m jealous of them, having every kids show ever made at their finger tips. But, the question is, will all of the play ground be talking about a big TV show during the day at school, like they used to? There’ll be no shared viewing experience with everyone off doing their own thing – that classic QED about the kid with Tourette’s would pass them all by. And most parents will know ‘On Demand TV’ can make them pretty demanding once the device goes off.

The good news, though, is that kid’s TV these days is still as out there and trippy as it was in the 70s and 80s. Upholding the proud British tradition of churning out mad shit for kids to watch that’s been dreamt up by adults who were clearly off their faces.

Which brings me to… Bing.

WHAT in the name of heck is supposed to be going on here? WHY is an orange dungaree-clad rabbit being looked after by a little knitted ant toy, who sounds like a kindly old granddad? Who comes up with this madness?

Also, it turns out that the voice of the knitted ant toy (Flop) is an Oscar winning actor.

Mark Rylance picked up a Best Supporting Actor Academy Award for his role in Bridge of Spies. I doubt he thanked the producers of Bing at any point in his acceptance speech.

As you may’ve guessed, I’m not a massive fan of Bing. Primarily, because the episodes are FAR too short. They don’t keep a two year old entertained for longer than 5 minutes! How can I catch up on a recording of Match of The Day when I keep having to go back to the tablet to find another episode every 5 minutes?!

And I really don’t understand what on earth is going on. To me, it’s just a high pitched moaning little rabbit, with some other animal friends – like an elephant or a panda – going down to the park or playing at home and then getting involved in some kind of minor scrape. Which is then recapped at the end of the episode by said moany rabbit.

It’s a bit like when Mork used to feed back to his alien family in Orson at the end of Mork and Mindy, telling them each episode what he’s learned about life on earth.

Each animal also has their own strange little teddy bear helper with an adult’s voice, which appears to be their parent or guardian. But the relationship is NEVER explained! Where are the parents? Flop is smaller than Bing and yet is clearly the wiser more mature adult. The pair remind me a little bit of Little and Large (another dated 80s reference, really showing my age here). Am I overthinking this? I think not.

On a positive note: The dialogue is very realistic. It’s convincing Toddler Talk. And sometimes it’s so natural, it almost sounds improvised. Which is not particularly great for kids to pick up the odd word from, though, with Bing dropping things like ‘putted’ and ‘braked it’.

This rabbit – named after the second most popular search engine in the world (google it!) – is also teaching our youth to be very fussy and demanding. He’s often seen complaining about his food being ‘too mixed up’. JUST EAT IT, rabbit! And stop your moaning!

Maybe I’m being too harsh; it does have positive non-judgmental messages in each episode. And pre-school kids seem to love it. But, at just 5 minutes long, make sure you download a LOT of episodes for any big car journey.

So… To recap, just like Bing does at the end of each show; Bing is just a bit of an annoying little shit. And it’s a bit too worthy, a bit too short, and it’s got a weird knitted toy ANT as a carer.