How To Talk To Your Kids About Same Sex Families

I’m one parent of a two mum family. My wife and I conceived our daughter with the help of a sperm donor and at home artificial insemination – no turkey baster needed. We wished and hoped for her and on a rainy day in December of 2015, she swan dove into our lives and turned them upside down.

It’s a question I see a lot online. “How do I talk to my child about same sex families?” Usually followed by concerns of “I don’t want to ruin their innocence!” and “I can’t talk to my three year old about sex!” Look at the furore over Tom Daley’s baby news. People are losing their collective minds about how a baby can possibly have two dads.

So how do you talk to children about same sex families? Here’s the secret… you don’t have to talk to your child about sex in order to explain same sex families. It won’t ruin their innocence to talk about how different families are made up. It might cause a barrage of other questions, but that’s kids, isn’t it? If my child hasn’t said “why?” four hundred times, today, I know she’s not feeling well. Kids ask questions, and that’s okay.

Here’s a conversation we had with a friend’s daughter before Eden was even a thing.

4 year old : You know if you and Auntie Amy have a baby?

Me: You’re right! They would have two mummies.

4 year old: I have a mummy and a daddy

Pin it & save for later! 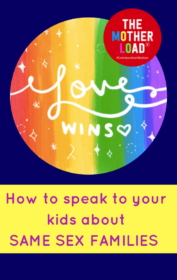 Laura is a mum of one fiesty toddler, living and working in the Big Smoke. She writes about her fairytale adventures as part of a two-mum family and is a self confessed Disney-addict. .