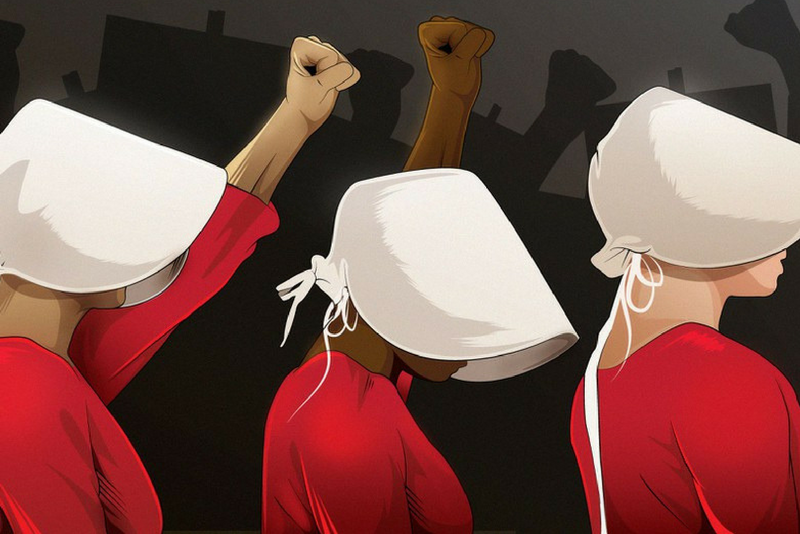 In May, Hulu’s The Handmaid’s Tale skidded into the UK’s television schedule at precisely the same point we were heading for the polls for the snap general election; the UK fevered with debates over a hard or soft Brexit, social policy and the rights of ‘our’ citizens.

It couldn’t have been more timely; a stark reminder of how a passive, apathetic public can accept a horrifying new normal with little protest. But as we stare at our televisions on a Sunday night, are we chilled by a fictional story; or in fact, horrified by it’s relevance to the current political landscape in the western world?

I was fifteen when I first read The Handmaid’s Tale, a dry preparation for my GCSE English Literature. Listening to a teacher discuss every fine detail in monotonic tones didn’t fire up the burgeoning feminist flame in my belly; in fact, it did the opposite and turned me away from the book for a few years, despite getting a decent B in my results. The themes of course stayed with me; rape, subjugation, exploitation, fear. However, it wasn’t until a few years later, when i stumbled across my accidentally stolen school copy that I sat, and read, with virtually fresh eyes. I devoured it in just a day and half; gripped by a sense of these themes that I had been previously so detached from in a classroom, suddenly feeling so much more real, intrusive and present.

That was eighteen years ago, and over the years I must have shaken my head in dismay and quoted from this book a hundred times at co-worker’s disputes, election results, Trump’s rise to presidency. I even slipped a note; ‘Nolite te bastardes carborundum’ into my desk drawer as I left a particularly misogynistic building firm. But still, the reality of Gilead, and it’s brutal regime, seemed a million miles away.

And then, Trump was elected. And the world became darker; especially for women. 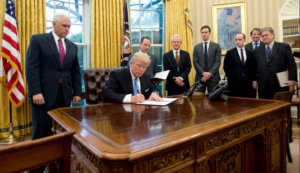 This image, of the President signing a document, surrounded by no less than eight men and no women in sight, and Mike Pence, pensively stooped over the newly elected Trump, chilled my feminist heart. For that single, document that he signed signified the erosion of thousands, maybe even millions of women’s rights all over the world. It took away their freedom, their future, their right to decide whether to bear a child or not. It took away their right to bodily autonomy. And this was the moment that the Handmaid’s Tale became a crashing, terrifying reality. That image not only tells you about the policy to remove all funding for abortion abroad, but it tells you that men, in suits, without any academic experience can sign away your rights as a woman in a heartbeat given the power to do so.

On the day the Conservative Government announced their intention to form a collation with the DUP – the Irish right wing, socially conservative party, who are anti-abortion, anti-homosexuality – episode three aired. The perverse reaction to birth, and the discovery of Ofglen’s lesbian relationship with a Martha, resulting in her genital mutilation and the brutal hanging of her lover, played out into the evening against a daunting political backdrop across the United Kingdom as our government formed this controversial alliance.

“Better never means better for everyone… It always means worse, for some.”

The Hulu series is vividly up to date and powerfully relevant – Atwood’s stark, brutal dystopian novel has been brought to modern life; with credit cards declined, information gleaned from iPads and journeys taken in Range Rovers. While the book focussed on the occupation of New Jersey, the series expands the seizure of the entire United States of America ensuring that in today’s terms, is so much more significant.

But what of it’s relevance? Why does The Handmaid’s Tale feel so deeply chilling in 2017, significantly more than ever in our ‘westernised world’? In recent interviews, Margaret Atwood explored this and issued stark warnings against the Trump presidency and the conservative power in the White House since January. But there are parallels – and warnings – to be drawn more significantly within the last thirty years in Afghanistan. In the 1960s, Afghanistan was a progressive, modern society with women in mini skirts and Twiggy-esque dresses, sleek blonde bobs, enjoying music, life, co-education and freedom. In such a short time – just a decade later, they were plunged into war by the Soviet Union, and then in 2001, the Taliban took control and women’s liberty, freedom and expression were eradicated behind the full body veil; the image that many of us now associate with Afghanistan in 2017.

“Ignoring isn’t the same as ignorance, you have to work at it.”

How does this happen? I want to insist that if this occurred in the UK today we would fight, protest, and rally against such a brutal regime – yet after watching this adaptation, I know exactly how it could happen, and that we would calmly walk into the storm in a fog of bemusement. Look at the recent referendum, and the unchecked, unaccountable mistruths the public were sold. In Gilead, the regime takes control after a series of coordinated terror attacks across the nation, resulting in martial law and ultimately a coup d’état by the Sons of Jacob; right wing, socially conservative religious fundamentalists who take siege and control, plunging the United States ‘under his eye’. If you are still unconvinced, the USA have just reported lowest fertility in 2016 ever. It’s completely believable, and sadly, too close to home.

As we see our own country change around us post Brexit referendum, and the snap election, can we guarantee that we aren’t sleepwalking into a Gilead of sorts, step by step? The Conservative’s conservative internet policy could be perceived as an infringement on our information freedom. (“Under her eye!”) No? Okay, a little further; in El Salvador, where a woman has been imprisoned for miscarrying her baby. Too ‘remote’? Not enough? What about the 160 million women who will be subjected to female genital mutilation across the globe. We’ve already discussed Donald Trump’s anti-funding for abortion policy for women across the globe, but what about something a bit closer to home – say, slut shaming? Yes, we don’t all sit in ‘Red Centre’ directing our mirth at one woman in a circle, but you don’t have to venture far on social media far to find a group doing exactly this online. Or the Daily Mail’s ‘sidebar of shame’, of course. Margaret Atwood has repeatedly stated that everything in the book has happened somewhere in the world, at some point.

“When I first published the book, some people did the “it could never happen here” thing. “We’re so far along with women’s rights that we can’t go back.” I don’t hear that much anymore.” Margaret Atwood, Time Magazine

It creeps in, little by little, occupying a small part of our collective conscious gently. What feels outrageous when presented as a whole isn’t when you consume each part in small nuggets of ‘can we cope with this’. Yes, protests will happen, but they will be polite, measured and calm. They present a view, rather than a force. And when there is little unrest, government take hold, change policy ‘for safety’. Social media is flooded with propaganda, filling every corner of our judgement with and that is the terrifying prospect. Those nations that we think of as ‘so far away’ were once developing, in control, ‘normal’ with citizens going to work, raising families, with entrepreneurial vision and thousands of years history behind them. Once plunged into war, many of those citizens fled for safety; to what? As June, Luke and Hannah to seek solace and freedom in Canada, their story isn’t so far from those desperately risking their lives, crossing the Mediterranean sea in small boats for the same – freedom from a regime.

Despite the success of feminism over the last fifty years, we are still in battle mode. Pornography – especially violent – has only increased in popularity. Despite a female prime minister, we have less than 30% of women in the House of Commons here in the UK. In the USA, just 19.4% of seats held are done so by women. The President of the United States reckons he can grab any woman ‘by the pussy’. POTUS. Don’t be fooled by Theresa May wearing a ‘This is what a feminist looks like’ t-shirt either. This is the woman who cut funding for the health in pregnancy grant. She slashed child benefit. Remember Sure Start centres for families who were underprivileged, giving them access to courses, and groups and support? Yep, gone. She pulled the shutters down on shelters for victims of domestic violence – and their children. She cut funding for rape counselling and eradicated legal aid for cases concerning sexual abuse. She closed 23 specialist domestic violence courts. Funding for CCTV cameras and street lighting were decimated. Still think it couldn’t happen?

The brutal reality is that many of our members on The Motherload® would become Handmaids if the Gilead regime was to become a reality. Any woman in a relationship with a man previously married, or single, with proven fertility would be rounded up, red tagged and sent to the red centre to be ritually raped for the ‘good of the nation’.

Open your eyes, and keep them open. Being a feminist isn’t about wanting stupid amounts of power over men, emasculating them and throwing our bras into the fire. It’s about harnessing our feminine power, and demanding equality for women; for all, and ultimately, not sleepwalking into the nightmare reality of the Handmaid’s Tale.

Blessed be the fruit, bitches.