A Life or Death Decision

We Need to Talk About: Your First Week as a Mum
Healing After a Traumatic Birth
Maternal Mental Health: The Postnatal Illnesses Nobody Talks About 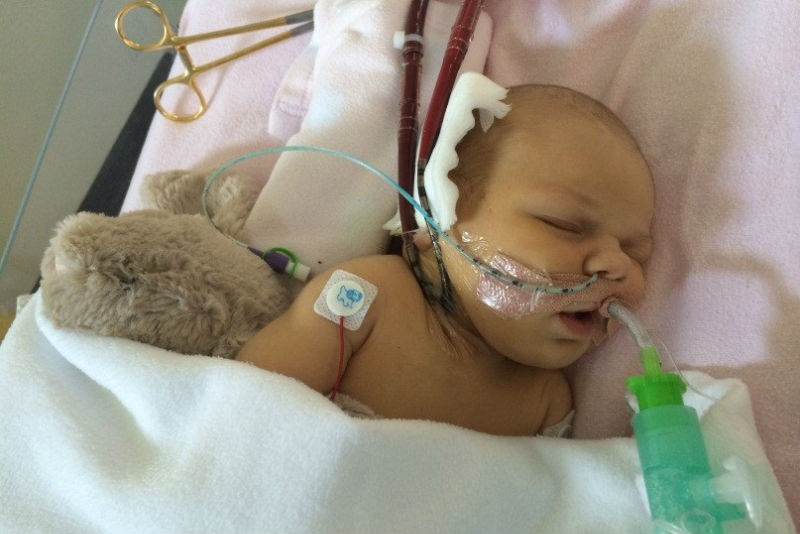 The fate of hundreds of unborn babies is hanging in the balance, as the future of a life-saving children’s unit is decided.

East Midlands Congenital Heart Centre (also known as Glenfield Hospital) has saved the lives of hundreds of babies and children in the East Midlands. The centre also provides half of the country’s capacity for ‘paediatric respiratory ECMO’ – a revolutionary life support system for babies.

This unit – and specifically the ECMO life support – saved the life of my friend Becky’s baby when she had complications in labour and was starved of oxygen. Under the current proposals, children’s heart surgery for those born with heart defects would stop being carried out at EMCHC.

Here, Becky explains what happened to her and baby Olivia. We’d never discussed this in detail before and she agreed to tell her story to show just how important the EMCHC is. I cried when I wrote this and consider Becky one of the bravest people I know.

“I went into hospital in Lincoln in the very early stages of labour, I wasn’t even 1cm dilated but when they put on the foetal heart-rate monitor, Olivia’s heart rate had dropped to 47bpm and was getting less and less as she was severely distressed. She had meconium aspiration syndrome, severe perinatal asphyxia and was having a pulmonary haemorrhage.

Olivia was removed by crash caesarean section and was immediately taken to the neonatal unit where they tried to cool and stabilise her. Recovering from emergency surgery was nothing compared to how it felt to hear the worst words of my life. The doctors said they couldn’t stabilise her and told me to be prepared that she was going to die.

Going into hospital just hours before, I never believed that her little life was going to end so soon. Her best chance of surviving was to get her specialist care.

With help from the neonatal ambulance service, they stabilised her and we got her to Nottingham where they settled her but told me she was one of the sickest babies they had seen in years.

The only chance she had of recovery was to get ECMO treatment urgently. This treatment is only available at three hospitals in England. She was rushed to Glenfield in Leicester. I will never forget signing the forms to say I understood that she might die on the way. The decision to put my incredibly vulnerable child at even more risk was unbelievably hard. But we had no choice – this was a life or death decision.

Olivia went straight into surgery which in essence put her on a ventilator and re-oxygenated her blood. By the time I arrived, the surgery was already complete. I still hadn’t held my baby, I hadn’t even named her. I was completely shell-shocked.

We were there for 5 days waiting for the ECMO to work, with the most wonderful, kind nurses and staff who understood just how terrifying this was for us. We were then transferred back to Nottingham. Despite everything we’d been through, this was the most stressful time. We watched her tiny body with tubes and machines surrounding her. I was helpless to do anything despite every instinct to hold and protect my baby. We watched the time tick by and wondered whether she would ever open her eyes, whether she would ever recover and if she did, if she would be left with permanent brain damage from when she’d been deprived of oxygen.

And then she opened her eyes. I finally got my first cuddle with her – a big moment for any mummy but incredibly emotional for me.

She started to recover. Eventually we took her home. And after a year we had the all clear that she was a happy, healthy toddler and the news we had waited so long for – she hasn’t been left with any lasting problems from her traumatic entry into the world.

We have been so lucky in so many ways. Without a doubt the staff at the EHCMC saved her life and we can’t thank them enough. To have the hospital beds and specialist doctors available when we needed them was imperative. To transport such a critically ill baby any further wouldn’t have been an option.”

What is happening to EMCHC?

On 8 July 2016, NHS England announced that it was ‘minded to decommission’ congenital heart disease surgery from the East Midlands Congenital Heart Centre. You can find out more here

Last year they carried out more than 300 surgical procedures and had a zero mortality rate following surgery. The unit has a 99% satisfaction rate and is a lifeline for parents with very sick babies and children, some of whom have been or will be attending the unit regularly for their child’s whole life.

There are many illnesses we wish that cures could be found for, to stop babies dying unnecessarily and the incredible heartache that causes. But when the solution to stopping babies like Olivia from dying is to keep a vital service going, surely the decision is clear. To sign the petition to the Government to ask for a full public consultation into the proposed closure, click here

Image credit: Olivia in hospital, after surgery. Courtesy of Becky.