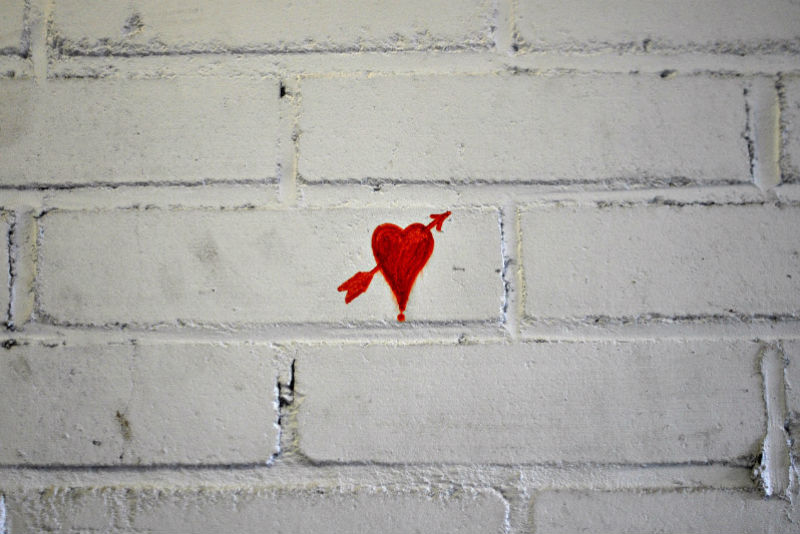 In the time Before Children (BC) my husband and I would book a table at a restaurant, drink one too many glasses of wine, grab a taxi home and do what couples without kids take for granted most nights – go to bed, at the same time, in the same bed and stay there all night.

Back then, if V Day fell on a weekend night, we might have even shared another bottle of plonk, giggling under the duvet.

We were beholden only to each other and could lie in until 11am if we wanted.

But those days are long gone.

Now, we know things are going well if we get the chance to eat our M&S Dine In For Two meals together before our 11 year-old daughter wanders downstairs in her pyjamas to join us at the table.

Despite having been put to bed early so we can have some ‘we time’ and having had no desire to talk about anything of any interest, she will proceed to steal mouthfuls of lasagne and chat about her day as my husband and I look at each other across the flickering candles.

I love you kid, but seriously, have you never heard the phrase ‘three’s a crowd’?.

Then there’s our three year-old to consider, who wakes up at the sound of a gnat taking a pee three miles away.

You know how some pre-schoolers go down from 7pm to 7am, night after night, without a murmur (I know of such children, they do exist)? My  boy is is not one of those children.

He tends to stir from a deep, deep slumber at the exact point my husband leans over for a kiss.  His timing is impeccable.

The best option is to leave the kids with a babysitter (who are like rocking horse shit on Valentine’s Day – good luck finding one last minute) and go out. Better yet, arrange a sleepover for them.

But that’s easier said than done.

A few weeks ago, when there was still time to make plans, I suggested a trip to the cinema to see the second installment of the Fifty Shades of Grey trilogy but my husband still hasn’t recovered from the trauma of watching the first film.

He said he would rather we went to the all-night car wash together – to wash his car.

I don’t blame him. Fifty Shades of Grey is one of those films women watch with their girlfriends, preferably the late showing, after a few glasses of wine.

Or they watch it with their partners on DVD, with a few glasses of wine. Either way, the general consensus is, you need wine to watch these films.

A trip to the cinema could have been achievable when I first suggested it but we have left it too late to organise an overnight stay with our children’s grandparents, plus I wouldn’t want to inflict my three-year-old sleep thief on them. They may only have him stay over the once, so it needs to be for something good, not something as trivial as Valentine’s Day.

Maybe if my husband and I were jetting off for a weekend in New York it would be worth the risk? I’ll suggest it for next year…

So, this is how I envisage our Valentine’s Day will go…

My husband and I will just about to remember to give each other a card in the morning, before he rushes out to work. When he walks back in the door, the children will have rumbled something is afoot and will be doing their best to delay bedtime. I will already be sipping my first glass of wine and some fancy chicken ready meal thing will be melting in the oven. Given the excitable state of the kids, it will take two of us to settle them.

The oven timer will ping, neither of us will hear it. We will wander downstairs to the smell of charred chicken to discover the chicken thing has become a blackened chicken thing. It ends up in the bin.

We will console ourselves by eating  Doritos and dip and have a (another) glass of vino, before falling asleep on the sofa watching something on Netflix that took an hour to choose.

At around 10.30pm, one of us will wake up, look at the other snoring,  cover them up with a throw and head to bed. The other person will stir and be a bit grumpy about being left downstairs on the sofa.

Just as we attempt to make the most of a bad situation, if you get me, the boy will wake up and one of us (me) will spend an hour settling him back to sleep.

Once the little guy is back down, the other child will wake up and stick her head around the bedroom door, scaring the crap out of us both before turning the landing light on and disturbing her little brother again.

When I finally fall back into bed, my husband will be snoring like a walrus and the clock will have tick-tocked its way into the early hours of February 15.

That’s what I expect will happen.

If it happens any differently, I definitely won’t be telling…

Love this? You can read Sam’s last MOLO blog here or for the latest from The Motherload®, head to our homepage

Sam Curtis, 46, lives in Lincoln, in a house that’s not as clean or tidy as she’d like with her husband and their two children, a tweenage daughter and three-year-old son. You can follow her on Facebook and Twitter