We’ve Had Head Lice So Often, My Son Names Them… 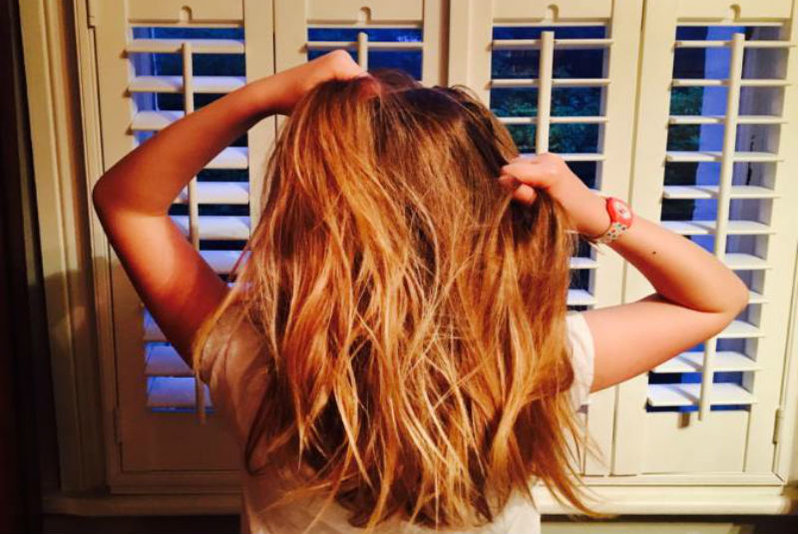 Do you remember the nit nurse? if you are a child of the 70s you will. She is etched forever on my subconscious. A couple of times a year while in primary school, a jolly lady in a nurse’s uniform would arrive at school. Gradually throughout the day, each child would be removed from class and sent to the school office. There would already be a small line of nervous children at the door. Upon entry you would be asked to sit, the ‘nit-nurse’ would then slowly check your hair for lice. And those found to be carrying the unwanted little stowaways would be sent back to class with an envelope in their hand, instructed to hand it ‘to mum’. It was supposed to be discreet, but we all knew what was in that envelope and the shame felt by the unlucky recipients was felt deeply. By all of us. The fear felt by those of us without an envelope similarly deep.

Lice, nits, cooties, Pediculus humanus capitis (even the Latin name is blood curdling), whatever you call them. Nasty evil little creepy things that seem to come from nowhere, in their tens of thousands and live on my children’s heads at least once a year since the first term in reception. I hate them.

I remember the first time my eldest got them, I think she was in Reception and we were shocked and upset. Who on earth had given them to her? What sort of parent would allow this to happen, to let their child go to school and infect our little angel? Of course the reality is that, had we kept our kids off school every time they had had lice since that fateful day then I would almost certainly be on first names terms with the truancy officer by now. So we bought the lotion, chucked it on, had a quick comb and thought it was dealt with. How little did we know. Cut to Friday morning, about a week later. Biggest one is at school and I have taken her little brother, aged around 18 months to the local playgroup. This is not just any playgroup. Its a top banana North London fancy one full of yummy mummies and girls and boys in matching outfits and perfectly coiffed hair. The girls even wear frilly knicker things over their tights. There we are, in a circle, small one on my lap, singing the wheels on the bus and my eye catches something. I look down… holy God, he is crawling with them. His hair is actually moving, they are having a fucking rave in there with an MC and HUGE sound system. Its like the Pyramid stage at Glastonbury for fuck sake. I can honestly tell you I have never moved so fast in my life, making excuses about a soiled nappy with a bye, bye, sorry! see you next weeeeeeeek….

And so it went on. We spent a couple of years buying every product on the market and every comb – including one that electrocuted the little bastards – and still they came, in their droves. It was like 7am on the opening day of a new IKEA store. We would be convinced we had cracked it – yay! And they would return with a vengeance just a couple of weeks later. I became obsessed, irate, insane. I would walk slowly through the children in the playground, close to the ones that played with my precious daughter, staring at their heads. I stopped short (just) of carrying a magnifying glass, but I would have done if I thought I could have got away with it. I hoped to see them, catch them out. What the hell was I planning on doing when I did? I wrote to the school, I begged them to ‘ban head lice’ – the head looked at me, silently and with pity. Thinking when will this deranged woman learn?

Number 1 child would get them, then Number 2, then Number 1 again, but I never seemed to. But my other half did. The little fella loved them, he gave them names like Bob and Kevin. He didn’t want me to kill them. He also names woodlouse and the mites that live in his eyelashes (they do, honestly, we read that at the Natural History museum) I didn’t tell anyone because I was ashamed. It’s a taboo, like worms or never having sex. We all know they get them but we don’t talk about it. Instead we silently crack up or judge people and say they are dirty or both. I remember the worst year, when Number 1 child was in year 4, in the bathroom, combing her hair and both of us crying. Me, Because I had done this every night after work for a month. And her,  because it was horrible and it hurt.

Finally I went to the doctors. A lovely female locum that day told me that I didn’t need expensive shop-bought nonsense. Just conditioner, a plain old nit comb and lots of patience. She told me her kids had them all the time and not to worry – She told me that I wasn’t a bad mother and that it would get better eventually. I was so happy that I cried.

After that we turned a corner. We felt empowered. the next time she got them my other half said, ‘fuck it’. He went round the playground and told everyone she had them (I made sure I was at work that morning) and told them to check their own kids. He decided he wasn’t ashamed anymore. Gradually it’s got better. As she has got older she gets them less, and him too, his hair is shorter anyway.

The last outbreak was last summer. I put the kids in a summer camp for two weeks before we went to the USA to visit friends in Cape Cod and Family on Nantucket (a beautiful Island off the coast of Massachusetts). They must have picked them up there as they had been previously clear. A week into the holiday I noticed him scratching, then her. It didn’t occur to me that it could be lice. They had been clear for MONTHS. I assumed it was salt and sand from the beach, the kids showered while we were there and we had an amazing time. The day we arrived home I put him in the bath and was washing his hair – ARRRRRGGH! Holy Shit – his tiny head, a malevolent metropolis of tiny parasites. This was not good. My sister-in-law is an amazing woman, she is clever and funny, successful, a great mom – she is also quite highly strung and bit obsessive about hygiene. I voted not to tell them (I am so sorry Liz), he told them. There was a shriek I think , then silence and lots of late night texts. Then a photograph. Just a single solitary photo on email. It was of my teenage nephews sat on a chair in their hallway, towel around him and a nit-nurse, yes, a real life, uniformed nit-nurse attending to him.

In that moment, all of the shame I had felt as a child came flooding back, I was him on that chair, circa 1976. As I write we have been nit-free for some time. We are yet to be invited back to Nantucket, but I live in eternal hope. I must go now, and scratch, because all this nit talk has made my head itchy.

Top Tips for keeping the little bastards at bay:

Like this? Share it and spread the MOLO love. For more funny blogs head to our Wine Time section and for the latest from The Motherload® bloggers, pop over to our homepage

Karen is mummy to 2 Humans and 2 cats, and partner to 1 (Human). She works in Telly full time and is constantly wracked with guilt about it. When she’s not helping to make TV programme she’s cooking, knitting or trying to escape the mayhem to go to the lido, because she is utterly obsessed by swimming in cold water.