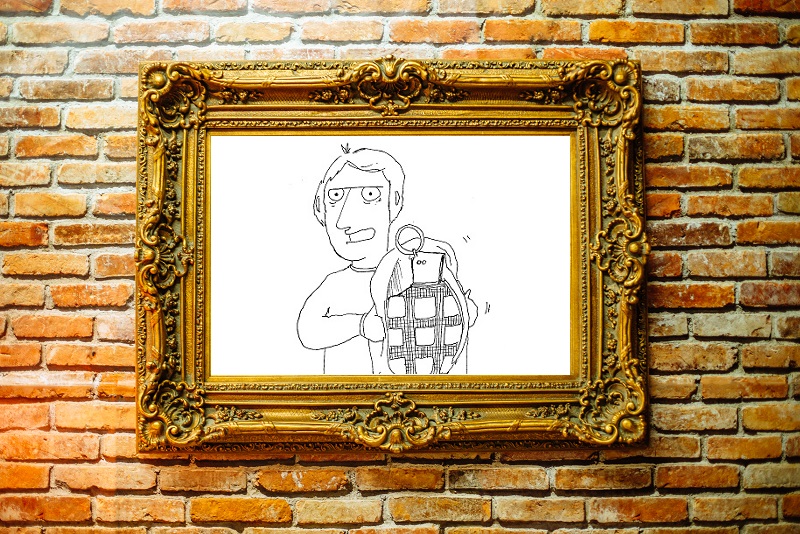 I am a father of two children. I love these two clever, kind-hearted little souls with all my heart with a love so pure that it sometimes makes me want to cry with happiness.

I am a father of two children who can be little shit-bags. They drive me to such exhaustion that all I want to do is drink six cans of continental lager and just sit and look at the wall for a bit.

These two statements are not mutually exclusive and that’s okay.

To that end, over the years I have developed some tips and tricks for shirking my parental responsibilities that have kept me relatively sane and I’d like to share them with you, as they may be of some use. I’ll start with an oldie but goodie.

To hand a baby to a wife, partner or close family member with prior and extreme prejudicial knowledge of a recent bowel movement.

This trick is as old as Methuselah and a basic manoeuvre for lazy Dads. The sort of thing you get taught on day one of shirking school, if such a thing were to exist (It doesn’t, I’ve checked).

If you’re a father you’ve almost certainly already done this. Even if no one has told you about it, you should have done it instinctively, like a salmon who swims upstream to lay its eggs, or a baby bird who takes a leap of faith knowing it will fly. Your lizard brain should have already shown you the path.

However, if you’re a father and for some unfathomable reason you haven’t executed a basic level one pass-off or you’re a father to be who wishes to be fully prepared when the time comes, I shall give you a basic tutorial.

You are holding baby. Baby turns to you, looks you straight in the eye and smiles. But it’s a knowing smile. Some would say an evil smile. I won’t go that far but at the very least it’s a smile which says “Something wicked this way comes”

What’s ‘happening’ is that baby is emptying its hot filthy guts and chances are it’s on a milk-based diet. Milk smells awful if you leave it out for half an hour. Piping it through 15 feet of intestines? This is not good. The first thing you need to do is assess the situation. You cannot and must not overtax the pass-off gambit. It is at its most useful during real emergencies and is wasted on anything less than a poonami.

(NB: Do not use the pass-off more than once per month as you need at least three weeks for the rage of a pass-off to fade from your wife or partner’s memory. You don’t knock off a post office and go back the next week do you? That way lies Strangeways)

In any event, let’s say in this hypothetical situation baby is attempting to fill two nappies worth despite only wearing one and you come to the conclusion that the bottom half of your baby is about to resemble a drunk man trying to eat a KFC three-piece meal at closing time. Essentially there will be barbecue sauce smeared all over some thighs and no amount of individually packaged wet wipes are going to clean this mess up. So you make the strategic decision to attempt a  pass-off. These are the steps you must follow in order for it to be a success.

Casually, real casually, wander into the room in which your wife or partner is currently residing in. As far as they know, you’re just dropping in with no ulterior motive. DO NOT approach your partner directly with the baby. If you approach straightaway with the rookie line of “Ooh can you just take him/her for a minute?” suspicions will be raised and motives will most certainly be questioned.

Nonchalance is the name of the game. Examine the mantelpiece, pretend you’ve come in the room to get something, even peer out the window and sigh “Foxes have been at it again”, it can be anything but must give the impression that you’re in the room for what could be any of a million other reasons. The fact they are also present is but a mere coincidence.

Cock your head and turn your ear to the door as if an imaginary doorbell has just been rung. Say something along the lines of  “Did you hear that?” and then (delete as applicable) “Was that the door/cat/fridge/sibling/second coming of Jesus?”

It does not have to be this particular distraction. For instance you could set the oven timer to 1 minute before entering the room or you could ring the landline from the mobile in your pocket. It can be anything as long as gets you to…..

As soon as your wife or partner is distracted, thrust the baby toward them, so you can go and ‘investigate’. They too will be curious and will accept baby on muscle-memory without even thinking.

You must leave the room fast but not fast enough to arouse immediate suspicion. Once you are out of the line of sight it is important to head to the furthest point from the faecal-grenade you have just pulled the pin on, as you will need to be in a sufficiently safe place in order to successfully navigate the penultimate stage

This is most important stage. Within a minute the cries of “Oh for fuck sake!” and variations on “You knew about this didn’t you, you absolute fucking bastard” will fill the air, along with it has to be said, the smell of shit.

But do not rest upon your laurels yet. Success is not guaranteed. Everything hinges on you holding steady with your course. Lesser men will fold, for what will follow in the next couple of minutes is a constant stream of threats. Followed by pleas. Then back to threats again. It is customarily concluded by promises of straight-up hate crimes.

But no matter what invocations and foul denunciations are thrown your way, YOU MUST HOLD FAST. There is a famous scene in ‘Das Boot’ where they’re diving to the bottom of the sea to escape the depth charges and they know that if they can get deep enough they’ll be out of range from the British Navy. But if they go too deep their U-Boat will implode from the pressure. This is you in that moment. It is my solemn duty to inform you that this stage of the pass-off is where most men fail. Many, rightly so, concede that the risk of long term fall-out is too great. There is no shame in capitulating. I myself have fallen on my sword many times, especially when it was my wife’s turn to make dinner that evening.

However, if you decide to stick with the gold run, then the most you should concede is a muffled “Wha?” or a “Huh?” through your hands as if you can’t hear what they are saying but are trying to engage with them positively. This will buy you more time and time is what will win this game of shitty chicken. They will blink first. A human can only stand the stench of toddler funk for so long, especially when it has the unique property of enveloping every essence of your being as if someone has thrown a shitty blanket over your face.

You win the battle of the wills and they change the nappy. (Warning: wait at least a minute till you reveal yourself. Many a man has been brought down by his hubris and fallen for their wife merely pretending to change the nappy and then thrusting the baby back onto the emerging father, thus reversing the pass-off. A triple pass-off has never been successfully attempted in the history of fatherhood)

Enjoy your victory. Many men will continue the charade and maintain their innocence which is a useful technique if you intend to attempt further pass-offs on future occasions. I myself favour a short victory lap around my wife as she tackles the carnage, with some enthusiastic crowing sprinkled in. (Shouting “Ca-Caw, Ca-Caw” whilst flapping my arms like wings is my personal coup de grâce but I encourage you find your own flourish).

Proceedings are normally brought to an end with a magnanimous gesture from me, offering to put the nappy in the bin, but this can often precipitate violence depending on the malevolence of the poo. So more often than not I depart with a barrage of “fuck off” and or “fucking arsehole” ringing in my ears, safe in the knowledge that I have yet again got away with not quite giving 100%.  This concludes our tutorial. I hope it has been of some use to you and helps in future shirking situations.

Brian is a 37 year old father of two, whose only long term parenting goal is to give both his children a comprehensive education in late 90s & early 00s shouty Hip Hop. A natural philanthropist, he has committed to leaking trade secrets from the front-line of fatherhood.