Ten Times MOLOs Made the News 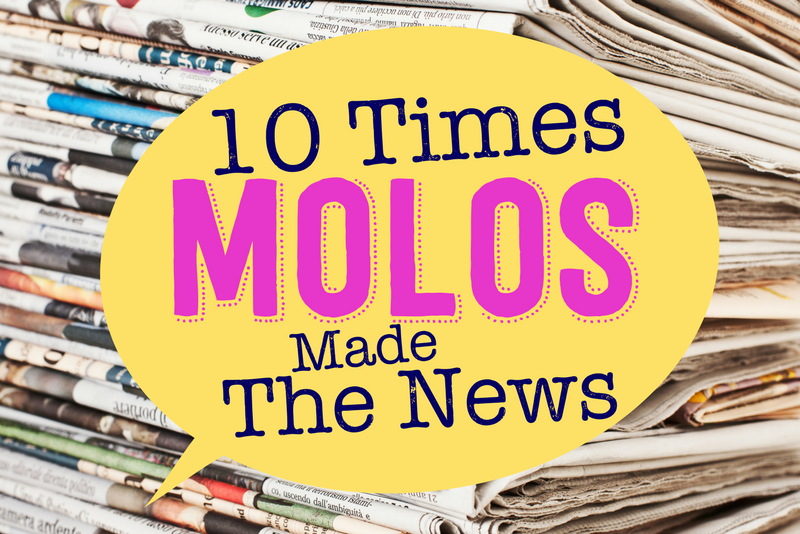 Wowser! What a year it’s been for The Motherload®! We’ve seen our fantastic Facebook community go from strength to strength, growing from 16,000 MOLOs at the beginning of the year, to more than 51,000 now. And those MOLOs are making their mark in the world with many stories from The Motherload® making the news in 2017…

We’ve also seen well over half a million visits to our website, where our fabulous crew of writers have published hundreds of new blogs (we put out a brand new article every evening at 8pm written especially for YOU). During 2017, MOLOs have not just been making each other laugh and picking each other up when they’re down – they’ve been making headlines of their own, taking The Motherload®’s ethos of kindness and support out into the wider world.

Here are TEN times MOLOs made the news in 2017…

January 2017: Are there any MOLOs in Utrecht?

MOLO Claire Restall was desperate to give her friend Nicola Margai a boost, after she became seriously ill on holiday and ended up in intensive care in The Netherlands over Christmas. Claire posted in The Motherload® to see if any MOLOs could help her by making a special delivery to Nicola to cheer her up as she recuperated on the ward. Catherine Drury amazed us all by making it to the hospital within a matter of hours. And lo! The hashtag #BeMoreMOLO was born… The amazing story was picked up by The Sun newspaper. You can read the full story on The Motherload® website: A Random Act of Kindness: Are There Any MOLOs in Utrecht?

March 2017: The Princess and the Wallet

Ayesha Jetley shared a gorgeous story on The Motherload® Facebook community about how her little girl had found a wallet. They managed to get it back to its grateful owner and he wanted to reward her for her kindness – especially as the wallet contained important documents for his overseas move. He visited with tickets for them to go and see Beauty and the Beast. The BBC loved the story and published Ayesha and Alaynna’s story online – you can read the full story of My Little Princess and the Lost Wallet here.

Little did Lorna Hayward realise when she posted her funny picture of Dan the estate agent in The Motherload® that things would go completely crazy. While Lorna was on a night out, the MOLOs launched the mission to #FindDan – and find him they did, tracking him down to Purplebricks estate agent in a search worthy of the FBI. The hilarious thread set a new Motherload record of 2.2k likes, so we just had to tell the story on The Motherload® website. The article went viral, breaking our website twice – #DanBrokeTheMotherload. Soon we were negotiating press coverage from the Mail Online (where he kinda went viral all over again – 2.2k shares!) , The Sun, The Mirror, The Evening Standard, Metro, Magic FM and Heart FM. The story even got picked up by the media in Australia and New Zealand.  Incredible!

The Motherload® takes a tough stance on MLM – multi-level marketing – because we firmly believe it exploits women and encourages them to exploit their friends too. You can read all about it in Motherload founder Kate Dyson’s article Network Marketing: A Cult for Mums? Her brilliant piece led to MOLOs sharing their stories of how they had been duped, with one being left in thousands of pounds worth of debt. Closer magazine issuing a warning to mums after reading Kate’s blog.  You can read it here

MOLO Karen Smith shared a totally gorgeous story about her seven year old son Stan who was on the tube with his dad when they got chatting to a young skater. The encounter ended with the skater giving his board to Stan, rejecting attempts to give it back – “no man, it’s his now” – how cool is that? MOLOs were overwhelmed by his kind gesture – proof that good things DO happen on the tube – and wanted to share the story to show the skater how brilliant they thought he was. The Sun, Closer magazine the Evening Standard, Transport for London and London Underground all helped us in our efforts to #FindTheSkater – did he ever read Karen’s message? We may never know, but it was a fantastic MOLO moment. You can read the full story #FindTheSkater: A Random Act of Kindness on the Tube. Love it!

MOLO Ren Benson started leaving anonymous cards around York to offer a pick-me-up to new mums, and invite them to join The Motherload®. One mum was so touched by the gesture that she posted about it in her local Facebook group. The BBC tracked both mums down and did this gorgeous article on them – they also got together to record a video for Look North and appeared on radio too. The online article made it onto the BBC’s most read articles and caused a surge in traffic to The Motherload® website and a huge boost in members in our Facebook group. Ren was inspired by one  of the many acts of kindness on The Motherload®, as were lots of other MOLOs. You can read the BBC story here.

Motherload founder Kate Dyson spoke out about the traumatic birth of her first daughter, and the postnatal depression which she suffered as a result, with i news following the announcement that the 12 year campaign for natural births was ending. The campaign had been widely criticised for making women who needed medical interventions – as Kate, and myself did – feel like failures. I also shared my experience of c-sections with the newspaper.  You can read the full story here

MOLO Louise Mallet shared a beautiful picture of her’s and her son’s hands with little hearts drawn on the palms shortly after the start of the school term. Her son was struggling to settle in and so she came up with the idea of a ‘hug button’ to help him feel connected to her. MOLOs LOVED the idea and so did we, so we shared it on our website and it went viral. Thousands of parents read and shared our article and it was covered by the media in the UK in Mail Online, The Sun Metro and Huff Post and on BBC Look East it was even reported in the United States on the HuffPost US Disney’s Babble, Good Housekeeping US and on Scary Mommy and Louise’s hug button has even made it as far as New Zealand, Belgium, Brazil, Germany and Australia and Asia. It was so incredible to see Louise’s brilliant, simple idea reaching so many parents and children all over the world.

MOLO founder Kate Dyson shared her incredible spooky story of her daughter’s ‘past life’ and it really resonated with members of The Motherload® Facebook community with thousands of members reading and sharing the post. The BBC got wind of it and Kate, and her husband Matt were invited to speak on BBC Nottingham to share their rather spooky tale. If you don’t mind being slightly freaked out you can read the full story here!

Okay, we are stretching the application of ‘news’ here but when Kate’s husband, Absolute Radio presenter Matt Dyson joined Instagram and declared that he would soon have more followers than Kate we saw the #Instawar begin. Kate commandeered the MOLO Army to back her up and the battle is still raging. You can follow Kate here, just don’t follow Matt as well…

MOLOs, it’s been an awesome year, and who knows what excitement awaits us in 2018? Share this blog and spread the MOLO love so even more mums can join our fabulous community. Happy New Year to you all! We couldn’t do it without you.