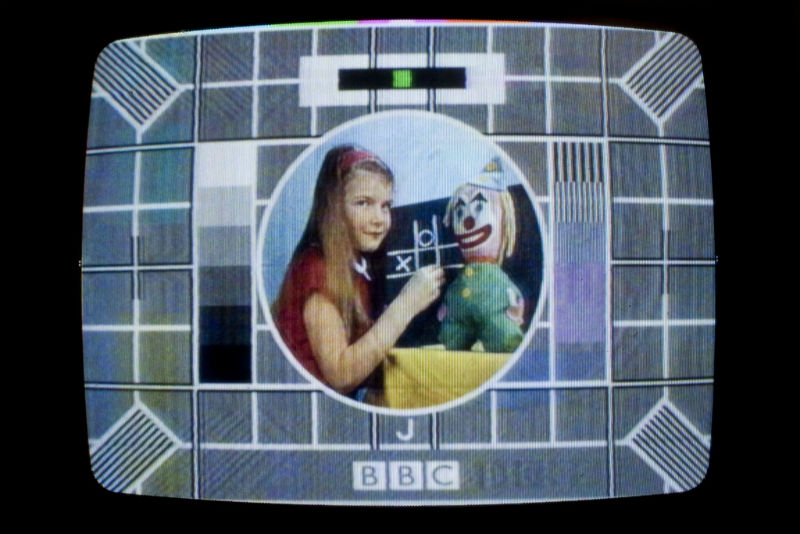 Kids programmes are seriously shit. Seriously. Particularly small children’s programmes.
I know I’m showing my age, but children’s TV was SO much better in the 80s. Hell, even my parents are nostalgic for the good old days, buying a sneaky DVD box set of ‘Cities of Gold’ last Christmas – apparently for me.  We used to have a blast as we sat down to watch it together, mum and dad sipping their Long Island Iced Tea and stealing our Peach Melbas as we all sang along tunelessly to ‘Children the Sun.’ Fun for all the family. The only blast I’d have with Peppa Pig is sending the pink parasite into oblivion to a distant planet incompatible with life.

Nowadays, kids TV has truly gone down the toilet. I’ve spent so many hours, days, weeks, months and YEARS of my life consuming a hideous cocktail of Peppa Sodding Pig, Thomas the Tank Engine, Peter Rabbit, a sprinkle of Ben and Holly – all topped off with the warped cherry of ‘In the Night Garden.’ I used to love Tom and Jerry as a child. Even that’s weird now.

What’s happened to the 80s legends of my youth? Dogtanian and the Muskerhounds? Thundercats? Inspector Gadget? Scooby Doo? Banana Man? Super Ted? I’ve tried to convert Isla to Dogantian (I even sang along to the theme tune) but she’s just not on board. I changed tack and unleashed the big guns: Cities of Gold. Not impressed. She shouted: ‘you’re a bad singer Mummy!’ when I shared my rendition of the theme tune with her and demanded ‘Peter Rabbit.’ Philistine. I despair.

There are so many horrific programmes out there aimed at ages 0-6 I’m spoilt for choice. However after much deliberation, I’ve managed to narrow it down to five:

Oh Peppa! Who doesn’t love to  watch an adorable little piglet interacting charmingly with her baby brother? Said no parent ever. Peppa is a complete bitch and  megalomaniac (if she was my child she’d spent her life on the naughty step for being such a massive dick to her little brother.) And she’s insufferably smug (don’t know why as she’s crap at everything) and spends her life jumping up and down in muddy puddles along with her equally smug mother and Daddy Pig – the one shining light in the whole bright pink mess. I quite like Daddy Pig. He’s pretty cool, as pigs go.

This monstrosity needs wheeling away and locking up in a high security garage away from innocent toddlers. It’s quite possibly the worst programme I’ve ever seen – and lets face it, it’s got some competition. The storyline is garbage, it’s cheesier than an all-day cheese party at a cheese factory; the dialogue (if it can be called that) is clumsy and unrealistic. I’ve had to pretend to Isla that it’s broken (permanently) on Netflix.  I start sweating every time it’s horrific, perky, naff little bus-face pops up on the top of the screen. Quick! Distract her!

3. In the Night Garden

Iggle Piggle and his crew take weird and and squeaky to a different dimension. I can see why he’s got issues. Every night he gets on a boat and sails off to the Night Garden where his girlfriend, Upsy Daisy behaves like the school bike and lifts her skirt and kisses everybody (and everything) in a ten mile radius. Then there’s Makka Pakka: a two foot furry midget with a trumpet obsession who my friend says sounds like ‘a motherfucker’ and the Pinky Ponk – which can only be described as a giant, farting, floating phallus.  God knows what’s lurking in that Night Garden. It’s definitely not safe for small children.

This one’s a bit of a cheat to be honest, but everyone’s warned me against it. Safe to say I’m not going to let the world’s most annoying little girl (their words, not mine) anywhere near my daughter.

People rave about this but we’ve watched one and one’s enough for a lifetime, thank you very much. Those dogs were so precociously perky I nearly stabbed myself in the eyeballs. They need putting down with immediate effect.

Yet every cloud has a silver  lining. I am currently loving a bit of ‘Frozen’ and have converted Isla to a range of Disney classics whilst Netflix is ‘broken.’ Yep, ‘The Little Mermaid’ is as good as I remember.

I’ll just make sure I remember not to sing.

Like this? Share it, and spread the MOLO Love! You can find more funny blogs in the Wine Time section, or for the latest from our bloggers, head to the homepage.

Lover of New Zealand Sauvignon and recent convert to Provence Blush. Into books, handbags, summer and infiltrating my husband’s cool Spotify playlist with the odd rogue Celine Dion track. Mother of two amazing girls (1 and 3) who delight and exasperate in equal measure. Exiled Geordie currently hiding out in London.