Berlin Attack: Terrorism Does Not Discriminate, So Why Do We? 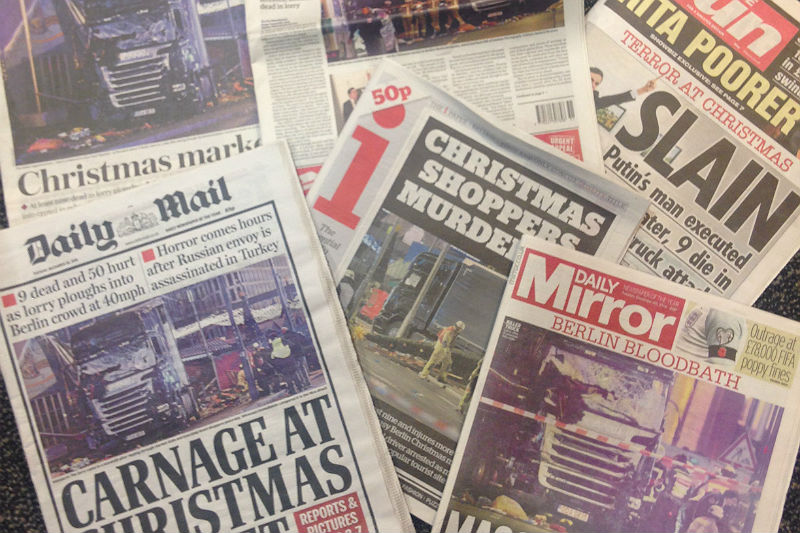 I found out about the Berlin truck incident from Katie Hopkins. In the age where a lot of us get our news from social media, hers was the first Tweet I saw that indicated something terrible was happening – again. And it wasn’t that I follow her, but that someone had already retweeted what she was saying, a mere handful of minutes after the story was breaking.

Despite the fact that all major news outlets knew nothing of the details at this point, Ms Hopkins was already frothing at the mouth, rabid with anticipation of the inevitable revelation that it would prove to be a terrorist attack. And she didn’t hold back, immediately Tweeting a very amusing poll, mocking the ‘leftie’ media and wondering how they would ‘neutralise the news’ by referring to the truck driver as a ‘lone wolf’ or someone who may have ‘had mental issues’ (which is a bad enough statement in itself but we’ll gloss over that) instead of calling him a great big Muslim terrorist.

Not one to darken the mood of the nation too much, she then went on to have a hilarious exchange with a Tweeter comparing her lady parts to fruit (“My foof is like a grapefruit”), before launching a tirade against German Chancellor Angela Merkel and declaring in response to a horrified commenter that “it’s too late for sympathy for the dead”.

And all of this in the same week that she was forced to apologise for horribly slandering an innocent Muslim family in her Daily Fail column, which she slyly Tweeted at 2am in the hope no-one would notice. The woman is never actually sorry for any of the vile words that come spewing forth from her twisted mind. We should not be expecting her to grovel in contrition.

But we all know that Hopkins is like this. It’s what she does. The really frightening thing is the thousands upon thousands of people agreeing with her sentiments. A quick scroll through the #BerlinAttack hashtag reveals a terrifying level of racist vitriol and fury directed at anyone perceived to be to blame for the thing, above and beyond Hopkins’ pantomime villain routine.

Angela Merkel is apparently the scapegoat for this latest incident, being variously accused of anything from having blood on her hands to being directly responsible for the attack. Her perceived crime has been to accept a large number of refugees into Germany through a widely-criticised open immigration policy – the kind of policy that would make the Daily Express retreat to its foreigner-proof bunker lest some displaced Syrians rise up and take over Hertfordshire.

Tarred with the same brush are all innocent refugees, as are poor beleaguered Muslims in their entirety, who must now be wondering how many more times they can try to explain that Islam and extremism aren’t actually the same thing.

The only thing this Twitter shit-storm was missing was Nigel Farage, who….Oh, wait a minute, here he is! Wading uninvited into the conversation like a guy with smallpox at a pool party. “Terrible news from Berlin but no surprise. Events like these will be the Merkel legacy”, he insightfully Tweeted (or should that be incite-fully?).

And what will your legacy be Nige? Dividing the UK to the point of civil war, misleading literally everybody into a Brexit frenzy, then f*cking off to play in Trump’s gold lift. Thanks for that.

He was, however, brilliantly shut down by Brendan Cox, widower of Jo Cox MP, who was murdered by a far-right extremist (distinctly separate from any potentially affiliated religion, you may notice). “Blaming politicians for the actions of extremists? That’s a slippery slope Nigel”. *mic drop* Of course Farage couldn’t keep his odious mouth shut on an LBC radio show this morning and accused Mr Cox of actually backing extremism with his support of campaign group Hope Not Hate. His comments were largely bollocks so I won’t repeat them here.

But already the damage is done. Those who are already fearful of immigrants seemingly have their fears confirmed. Those who would push their own extreme views are delighted that other extremists are doing the dirty work for them. And those at the top whose job it is to resolve the whole sorry mess are standing idly by while the mob becomes angrier and more defensive and more likely to take matters into their own hands.

Rather predictably, #PrayForBerlin was trending in the aftermath of the attack. Unfortunately, prayer is only of comfort to those who believe in it, and if you are comforted by praying for Berlin, or Nice, or Paris, or anywhere else, then I am genuinely pleased for you. It must be nice to feel that you are doing something to help, because the alternative, of feeling completely helpless about world events you can’t possibly have any control over, is not very nice at all.

I would like to think that amongst all of this, the most helpless people of all are not forgotten. Tens of thousands of people have been killed in the city of Aleppo in the last four years; men, women and children have been wiped out in indiscriminate airstrikes on schools, hospitals and other civilian areas like marketplaces – the uncomfortable parallels with an attack on a Christmas market should not be ignored.

But ignored these people are, because it’s easy to, as long as such unspeakable horrors aren’t happening to us and none of those people want to come and live over here. Desperate families with nowhere to go are being treated like some kind of sub-set of humanity – somehow not worth the same as Western lives because they are different from us. #PrayForAleppo exists only in protest at the hypocrisy of those proclaiming condemnation of shocking high-profile attacks on otherwise peaceful locations – including Russian President Vladimir Putin who expressed his horror over Berlin after happily bombing the shit out of Syrian civilians on an ongoing basis.

And there’s the crux of the matter. Aleppo’s refugees are not different from us. They are just people too. They could be us, going about their normal everyday lives in their once-beautiful city. The only time we come close to experiencing the daily fear and atrocities they do is when something hits closer to home, and our default response is to close ranks against those we don’t trust, those of whose cultures we are ignorant, those who we perceive to be different. And those who are already suffering suffer even more. The dissenting voices of the far right who would Make Britain Great Again shout louder and more people listen.

In a year which has already thrown at us almost too much to bear, we end with as much uncertainty for the future as there has ever been. If you’re of the praying kind, pray for humanity and see where it gets us. If you’re not, find a way to help your fellow humans and just DO IT. Just one small thing. Spread as much joy and love and kindness as you can. It might not shut Katie Hopkins up, but it could just make the world seem a little bit brighter than it does right now.

When she’s not in the office or busy doing ‘other stuff’, you can probably find her in soft play with a toddler and an excitable 6-year-old.